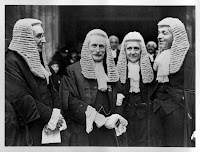 He comes from the rough and tumble world of Philly politics. He had no qualms accepting $100,000 contributions, and raised $32 million in his reelection bid. He has opposed term limits in the past. He still opposes the idea of a constitutional convention, something promoted by state rep. Craig Dally. So there must have been a few snickers from cynical reporters at the Pennsylvania Press Club yesterday when Governor Ed Rendell tried to reinvent himself as a reformer.
One of his "reforms" is the proposal that judges be appointed instead of elected. He calls it "merit selection." It's a crock. All this does is remove people from the politics. Judges will still be selected politically. It just won't be democratic. The decision will be made by aristocrats appointed by other aristocrats. Not a good idea. In fact, even the term "merit selection" is misleading. It creates the false impression that judges who are democratically elected are somehow inferior to those who play politics with elitists.

Our judges have already become too isolated and arrogant. Don't take my word for it. Consider this passage from John Morganelli's recent book.

If anyone tries to tell you that judges are apolitical, tell them to call me. In my 26 years as a practicing lawyer, I have learned that judges are probably the most political animals in the political and legal jungle. Not all of them, of course. But many come to their positions with the same prejudices and bias that we all have from our life experience. The donning of the black robe allows them to hide behind the law while forcing their own ideas of how things should be. They usually use a tortured interpretation of the constitution to legislate and impose their thinking on the rest of us. This is especially true in the federal judiciary where all judges are appointed for life and have absolutely no accountability.
Posted by Bernie O'Hare at 3/28/2007 12:01:00 AM

Glad to see you took off your Morning Call cheerleader's outfit and dropped your pom-poms for right-wing reporting long enough to recognize a rat when you smell it.

"Merit selection" is nothing but a backroom, behind-closed-doors way of hand-picking friendly judges who can be counted on to rule in the favor of... (all together now!!) those who picked them! I mean, duh?

All of Rendell's so-called "reforms" are meant to take power AWAY from the voters and weaken the power of the Legislative and Judicial branches of government so that the Executive branch has even MORE power.

John Morganelli is 1000% correct about most (not all) judges -- but especially those in Federal black robes who think they've been appointed "God in the Courtroom" for life and never have to stand for retention.

Bernie TNP, And I'm happy that you've dropped your Lisa Boscola bullhorn long enough to comment on this "merit selection" proposal. Leave it to Rendell to take away our right to choose and call it reform.

In Ohio, Supreme Court judges get elected for 6 year terms, EVEN THE CHIEF JUSTICE! That enabled them to rat out the scandals under Governor Taft, because he had no control over the court, when he tried to use executive privilege, the court acted on the behalf of the people. We should elect THEM ALL! Oh by the way, in our Western Neighbor, all judges stand for re=election at least EVERY 4 YEARS!

I agree with that!

Make every single judge run for re-election (not retention) every 4 years.

Speaking of retention, I'm hearing that the Justice Saylor camp is very confident that voters have forgotten that they're still supposed to be angry. In fact, they're over confident, almost giddy!!

That's the word in the halls of Harrisburg....

P.S. Bernie, sorry we can't do the radio show tomorrow because of your illness. If you go down to the Free Clinic, they can give you some medicine, 2 or 3 crutches, and hook you right up to some jumper cables that will make you feel good again.

Thanks for the comment about Saylor. Any judge who thinks he's going to sail thru a retention is out of his mind. Our local judges should be no exception. They're an arrogant bunch.

Sorry about the show. I won't do it if my voice is not right.

Obviously, the Saylor campaign has some polling data to indicate that the Justice is confident of retention.

If anyone knows for sure, it's Tom Severson, who masterminded Judge Panella's successful statewide run (and also happens to be the personal polling guru for D.A. John Morganelli). He did polling for the Morning Call last year that was right on the mark.

Tom is, without a doubt, the BEST pollster in all of Pennsylvania.

I've heard him speak a couple of times and I was blown away by how accurately he can recognize every trend, every nuance, and every little ripple in public opinion that matters.

Any chance you can get his opinion?

Severson, King of Dirty Campaigns, didn't do such a hot job for Nyce. Sometimes the people can't be conned.

I know he's friendly w/ Morganelli, but I doubt he'd speak to me unless I gave him a check. I'll look around to see if I still have a few checks in that account I closed last year.

Any judge who feels giddy about his upcoming retention is in for a surprise, especially in NC.

Here's a meaningful reform for judicial selection, one that should get more play. Non-partisan elections. All judicial candidates should be required to get X number of signatures to be placed on the ballot. Once placed, they are placed as a judicial candidate not as a party nominee. If there are 3 openings, during the primary, have the top 6 vote getters move into the general election.

The big problem I have is that our party based system requires judges (state and local) to get the party blessing and work through that system. If we remove the partisan process, we start to change things. But it needs to be coupled with the change to an election basis. Our district magistrates face direct elections. Why not everybody else?