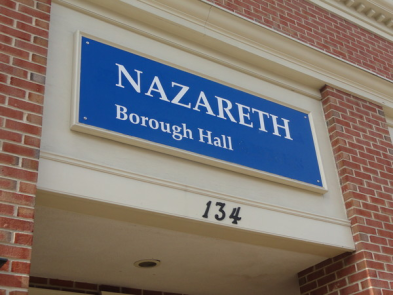 In 2012, Nazareth certainly had its fair share of capital needs. Numerous roads always need work. There's always a demand for new police and road crew vehicles. A new pool was in the works. With all these pressing needs, Nazareth Borough Council unanimously decided to seek $50,000 in uncommitted Northampton County gaming funds to build a road in Upper Nazareth, outside of the Borough. Does this make any sense at all?.

I've looked at the documents filed with the County, pursuant to a Right-to-Know request. Get this. This project was actually a $270,000 project. Nazareth would kick in the balance for a road that would be extended partially outside its own boundaries.

Nazareth never got the $50,000 it sought. But it was awarded $27,500 to extend G.W. Stoudt Boulevard from from its current terminus at the Highway Garage to intersect with Gracedale Avenue. In the application, Nazareth makes clear that the grant was for the benefit of Nazareth Ambulance, not borough residents. With this road extension, response time to Gracedale would improve. So would response time to the western portion of Upper Nazareth.

Undoubtedly, this would save lives. But should borough residents be footing the bill to help out Gracedale and Upper Nazareth residents when they have their own needs?

The reason Nazareth Borough Council ignored its own residents is because borough officials have divided loyalties.  Its 2012 nonprofit tax return, the most recent one on record, listed the Mayor, two Council members, the Borough Solicitor and the Borough Secretary among its eight board members.

Under the terms of the grant, the project had to be finished by October 2013. Nazareth sought and received a one-year extension because, for a time, it was unclear whether the County would hire Nazareth Ambulance for nonemergency medical transports.In fact, since Nazareth was operating under an old contract and different proposals were being sought, it really was foolhardy to even seek this grant.

This extension ends next month. Work on the road extension never started. Obviously, it's a project that won't get done despite Borough assurances in July that it was going ahead with the project,

Whether it likes it or not, the Borough will have to return the $27,500 grant proceeds.

Because it failed to use the grant money it did receive, and never bothered to send a representative to advocate in support of a grant for the pool this year, it's also highly unlikely that Nazareth will get a penny from the Gaming Board this year. It has applied for $50,000 for the pool.

"Nazareth would kick in the balance for a road that would be extended partially outside its own boundaries."

"Its 2012 nonprofit tax return, the most recent one on record, listed the Mayor, two Council members, the Borough Solicitor and the Borough Secretary among its eight board members."

Do these folks receive any monetary funds in exchange for their position on the board?

How much more evidence do we require to show that these individuals have used their public position to benefit financially?

The Gracedale contract was for TRANSPORTS ONLY! The distance between the new "road addition" and possible new Nazareth ambulance corp building compared to it existing location. Is around 1 mile. 1 MILE! For NONE emergency calls to Gracedale.

Remember that when we are at the poles. Remember that when you question why OUR hard earned tax payer dollars are being spent to benefit a private business which has no affiliation other then those who line their pockets.

Time to CLEAN HOUSE! FIRE TRACHTA while we are at it! Since the pocket liners won't!

They need an experienced check forger to forge a check to the borough for the amount. Problem solved.

What about the large open space grant they received for the pool filters that didn't fit in the room?

The taxpayers of Nazareth will not get the benefit of the (2012) $27,500 Gaming Grant because Council did not spent it in a timely manner, and it looks like they will not receive any Grant money in 2014 because of it. Nazareth did apply unlike West Easton who will receive nothing.

Koch is not chief material. No one in law enforcement has any respect for him.