Nazareth Borough Council Has Conflict of Interest With Nazareth Ambulance 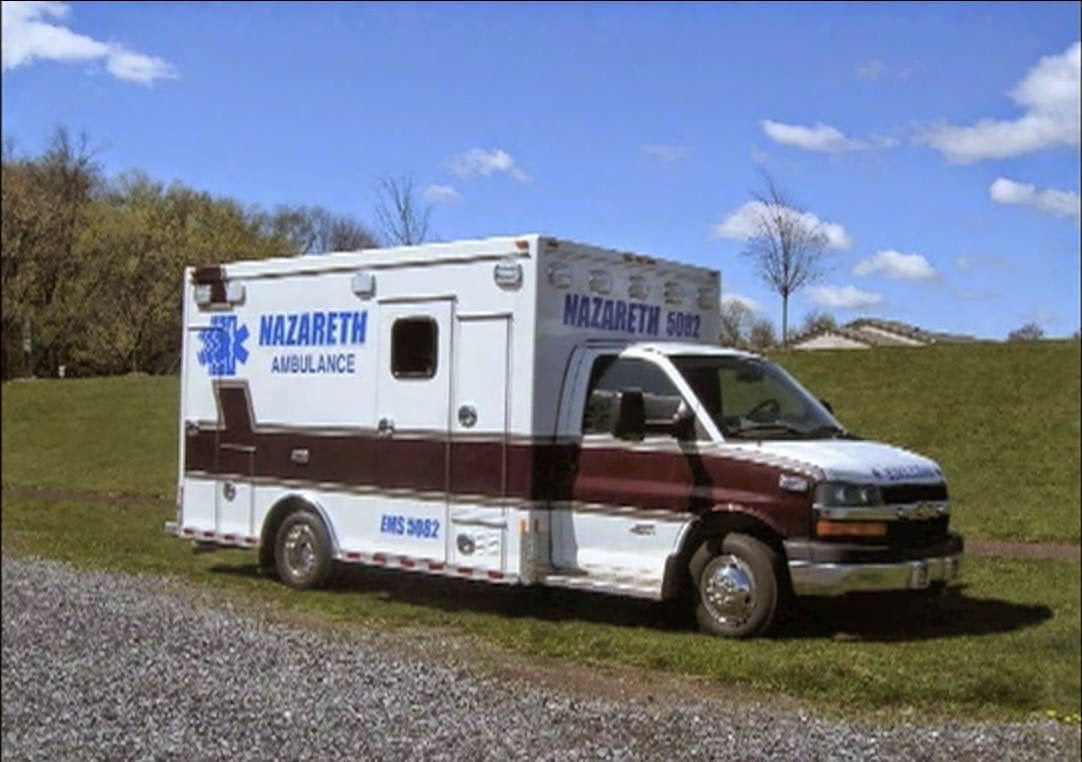 That includes nonprofits, according to a 2009 Pennsylvania Supreme Court decision concluding a need for public trust in government. "[I]t seems reasonable that a liberal interpretation of the term 'business' is necessary to assure our citizens that the private financial interests of their public officials will not undermine the honest discharge of those officials' public duties."

Thus it appears to be a conflict for a Nazareth Borough Council member to use the authority of his public office to advance the private pecuniary of Nazareth Ambulance Corps. Yet that is precisely what is happening.

According to the most recent nonprofit tax return filed by Nazareth Ambulance Corps, two Council members, the then Mayor, the Borough Solicitor and the Borough Secretary made up five of the eight directors. Yet on 9/3/13, the minutes reflect that Borough Council participated in an unanimous vote to condemn 9 acres (J7-16-9a), which is part of the new ambulance center. None of the ambulance directors recused themselves from the vote. They used the authority of their office (Borough Council)  for the private pecuniary benefit of a business (Nazareth Ambulance) with which they are associated. It is unknown whether any Council members or the other borough officials are paid in connection with their board duties.

This explains why Council rushed to apply for a roadway grant long before it was needed. This is being built to serve the ambulance company and Gracedale residents, not the Borough of Nazareth or its own residents.

I emailed Dan Chiavaroli, the Nazareth Borough Council President, on Friday to request an explanation of what certainly appears to be a conflict of interest. He has been identified as the president of Nazareth Ambulance, but I have no idea whether he benefits financially.
Posted by Bernie O'Hare at 9/02/2014 12:00:00 AM

You don't need to dig very deep to find dirt in Nazareth. Wonder how much he is charging the borough for those uniforms?

Bernie,
In your attack, you state that you don't know whether any of these people receive compensation from the ambulance corps. Their tax return, to which you provided a link, shows that nobody you accuse receives any compensation for their duties as Nazareth Ambulance directors. There may be more than meets the eye in your other accusations, but it appears that none of the five stand to benefit personally.

5:07,
Your statements insinuate that Nazareth's ambulances are in accidents on a regular basis. Do you know for a fact that the Borough provided vehicle insurance for the ambulance corps under their own policy? If so, who owns the ambulances that were insured in this manner?

Don't forget about tonight's council meeting at 7:00 PM at council's chambers. Channel 69 news, Morning call, The Express-times, Lehigh Valley Ramblings, The Home News, and maybe even NBC Philadelphia are all going to be there to capture the moment. Make sure everyone is wearing their Sunday's best. I know I will. Time to such it up, Cupcake.

Or perhaps they receive their Checks made out to CASH. The meetings are held in Al Pierce ' s office. This way if he doesn't like to hear what you have to say, he just claims, private property and made you leave.

6:06, This is not really an "attack". I point to the law and to the facts and realize that Borough Council members are conflicted. It is true the 990 reveals no compensation as Directors, but Chaivaroli is reportedly the president and may be getting paid in that capacity. So long as it is under $100k, it does not need to be reported. Same for Al Pierce, who I am told is their lawyer.

But even if there is no compensation at all, there is a conflict. It is a conflict for any council member or public official to use their positions for the pecuniary benefit of businesses with which they are associated, even if it is a nonprofit.

Unlike volunteer fire companies, volunteer ambulance companies are money makers with paid employees. Nazareth Ambulance has a lucrative contract with Gracedale as well. There is no reason for the borough to seek grant money on this entity's behalf for anything.

Bernie, let's not forget those who are the bottom feeders at Nazareth Ambulance Corps. They are great people, who very much support you in your efforts in GETTING rid of CHIEF TRACHTA and his little puppy Dan Troxell! The bottom feeders haven't had a raise in nearly four years. They are not union and have no contracts. They pay into their health care insurance and are way under paid for their trained field. The money clearly isn't going into their pockets. Perhaps their council's but surely not the workers!

Incredible! I know that the workers are highly dedicated and have seen that in person. You are obviously being mismanaged.

Anytime you sit on a "Board or an Authority" and you do not reveal your status (whether paid or unpaid on the Board or Authority) you are in violation of State and Federal Laws.
These Councilmen ought to know better. Even if you don't think there is a conflict you should make public the possibility of a conflict and let your Solicitor declare whether one exists.

It what if your Solicitor is also the Solicitor for the board? Kind of double dipping right? It's a GOOD thing that is his LAST year as Nazareth Borough's Solicitor. (But then again we get Scott. ) It's a very good thing that we have a voting year coming up! VOTE THESE PEOPLE OUT! We can't afford otherwise!

Where is the voice for the people? Where is the guy who promised never to let the government override common sense? Where the next Mayor of Nazareth? Where is Jack Herbst? You promised your voters that win, lose, or draw. When the time came you would return and stand up for the people! Has all hope been lost? Will no one stand up for public outcry?

Bernie, I thought the Gracedale ambulance service was bid out by Northampton County a while back and Lifestar was the low bidder by a huge amount. Why then is Nazareth Ambulance furnishing this service at a premium price to taxpayers?

C.P.M.@12:30,
Nazareth Ambulance WAS granted the Gracedale contract, and LifeStar is closing their Lehigh Valley and East Stroudsburg operations.

@6:37,
Three years have passed since the time frame you give. Who is insuring these vehicles today? Is it the Borough or the ambulance corps?

I believe Nazareth did reduce its bid.

Bernie @7:03,
You may be mistaken on the threshold amount that doesn't need to be reported. Any compensation in excess of $600 is subject to a W-2 or 1099, except for what the IRS calls "reasonable reimbursement", which in no way approaches the $100K you speak of. The law also requires the reporting of any key personnel who are compensated in excess of $50K, and there are none listed.

Yes, LifeStar is folding its tent and leaving the area. They claim their departure had nothing to do with the loss of the Gracedale contract. Either they are lying, or it was the right decision to hire Nazareth. One of the criticisms of LifeStar was that they were a commercial operation with no ties to the community. That appears to have been validated by their quick departure from our area. Their track record in the LV was modest at best. NVAC needs to be cleaned up though. There appears to be a considerable amount of patronage involved in their operations. And yes, Board members should recuse themselves from votes on borough council that involve the corps.

The 990 does list the total amount paid in wages to employees, but there is no other breakdown. It also lists $5,500 in legal fees.

Let say Matt Dees is doing a very good job reporting the news out of West Easton. Matt you may have missed a few things, understandable (some months no minutes) the tip of the iceberg. Who is the Councilman that works for Frick Transfer and take all the Borough vehicles to his employer? Only two municipality didn't go after the Gaming money, (UMB because of a new manager he will get his feet wet), and West Easton because there Council has no idea what is going on in that office. Also the Gaming web site makes it clear how to apply, like matching money is not a factor.

I Believe it's spelled Schlegel!

So why the hell would Judge Schlegel want to be a cop again? A specially in our little town, with the problems we have? Good grief! Didn't you read the side before getting on the ride? You must be THIS tall to ride!

The only TRUE officer we have! He was Chief once and will be again!

Next you'll be hearing about the former President of the Vig. Bar, now Mayor Carl Strye using illegal gambling machines to make a profit, and pocketing it for himself. Opps, did I say that out loud. Oh brother. ........well better start digging up your back yard Carl and get rid of the nest egg you have.

To think all this corruption started with Chief Trachta being exposed! Carl my boy, if only you kept your mouth shut last August when we were about to fire Chief Trachta. You know before you "found" the letter from the civil service board, that recognized Trachta as a police chief by appointment. All this because you made a bad choice. Let's see how you guys do to night? You know in front of the news reporters!

Wow, Nazareth Borough is dying a death of a 1000 cuts. With this revelation, the civil rights lawsuit and other issues -- it is time for the entire Council and Mayor to resign. Let the courts appoint new people to serve. This tiny town is out of control!

Nazareth Ambulance Corps and its members are a decent group of dedicated people and shouldn't have to be included in an "attack" on Nazareth Borough. There is a lot of misinformation being generated. There full time staff members do not have to contribute any funds to their current health plan and the ambulance corps does pay for its own vehicle insurance.

You seem to know a lot of Nazareth ambulance corp
Tell us then. Is it true that they haven't received any raises in four years? Also tell us if Nazareth Borough has EVER provided vehicle insurance to a private business? It's not hard to prove, just look at the Borough's insurance claims. Even if now they no longer provide insurance they did at one point. That's still OUR money that they have used for other municipalities! That's NOT OKAY!

I have a lot of respect for the Ambulance Corps and its staff. I met some of them during the dispute over the Gracedfale contract. The chief difference between these workers and Life Star is that Nazareth's people came bc they cared about the residents at Gracedale. They were not paid to be there. Life Star's people were paid to be there, and had nothing to offer.

I am not including them in my criticism of what is going on in Nazareth government. My criticism concerning the road grant was that, though it benefitted the ambulancve company and Gracedale, and that might be a good cause, that is not something that Nazareth Borough should do. The Borough needs to focus on its own needs.

I also am leery that members of Nazareth government have a controlling interest in Nazareth Ambulance and have voted on matters concerning the ambulance company in violation of the Ethics Act.