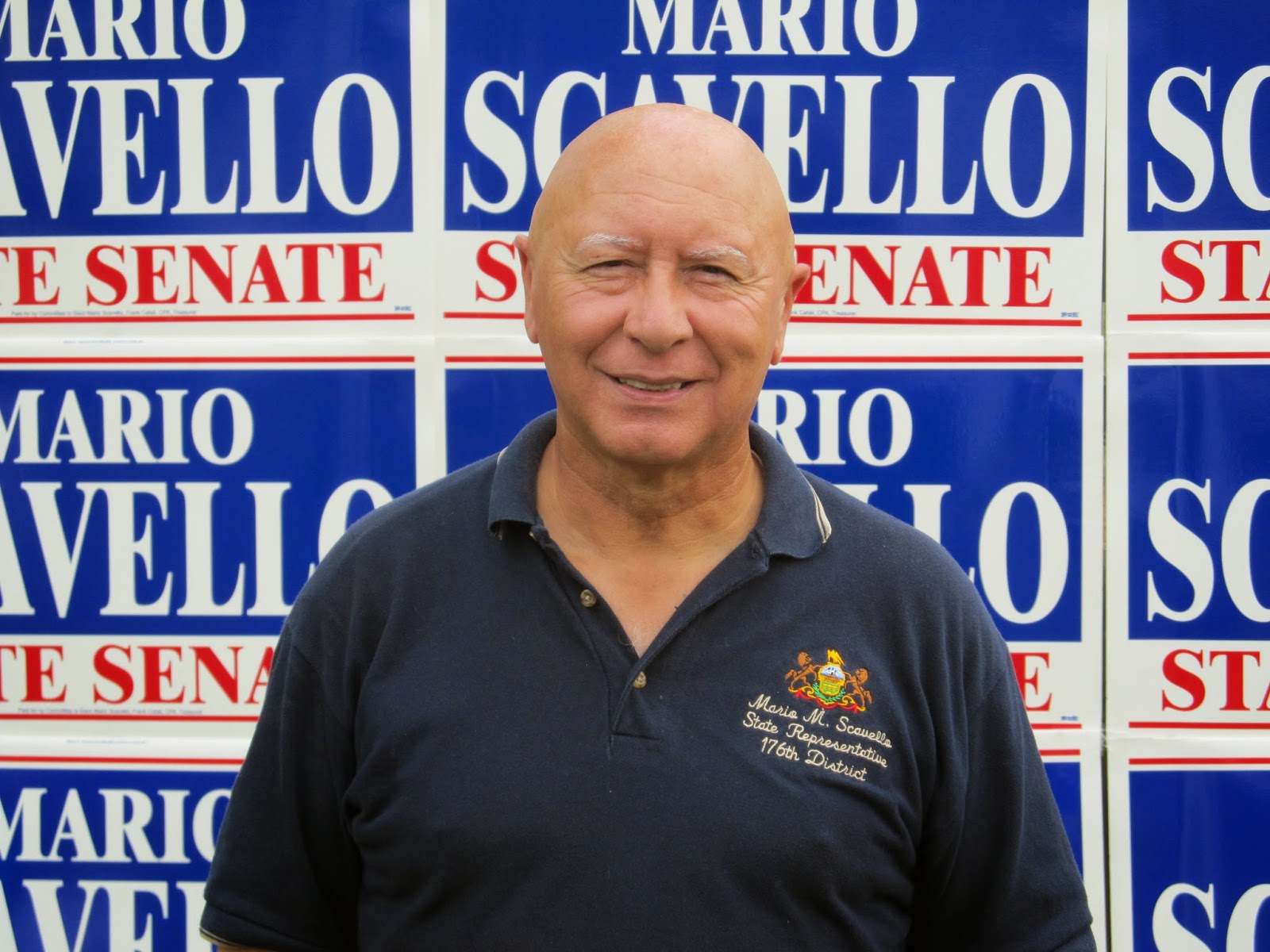 Mario Scavello, currently a State Representative, is the Republican choice for a new senatorial district that consists of most of Monroe as well as the northern half of Northampton County. He kicked off his campaign Saturday at Pen Argyl's Weona Park, attracting at least 300 people before he was done for the day. 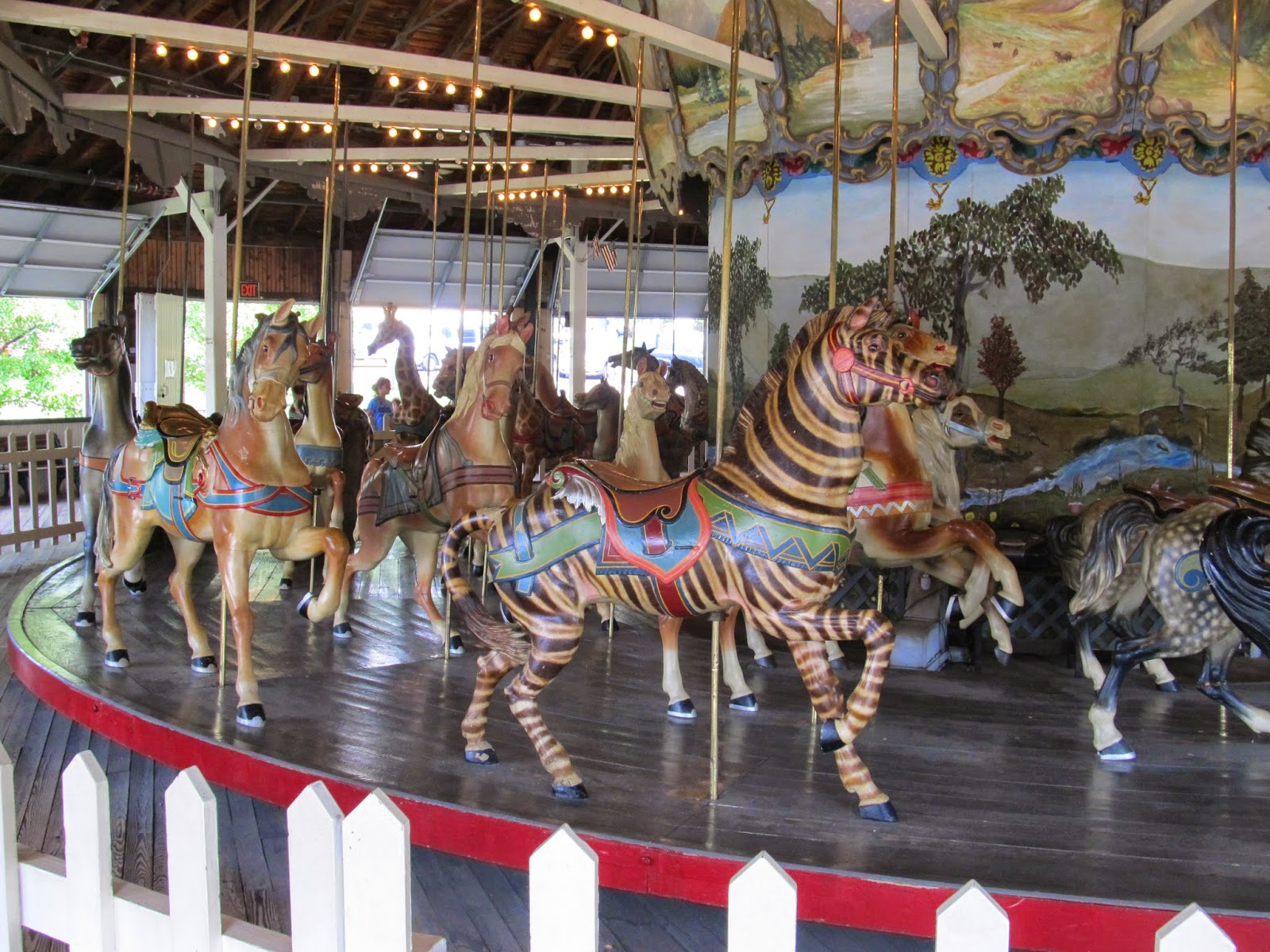 Republicans offered to paint my forehead with a Republican elephant, but I told them I was holding out for a tattoo.

I did sneak a hot dog.

Scavello was willing to make one pledge when he spoke to me. "Every road and every bridge will be paved and made safer," he assured me, noting that he would make sure that $1.1 billion raised in the new Transportation Bill will come right back to this senatorial district.

"If we don't address our infrastructure, forget about jobs," Scavello added, noting no prospective employer will locate to an area with sub par roads. 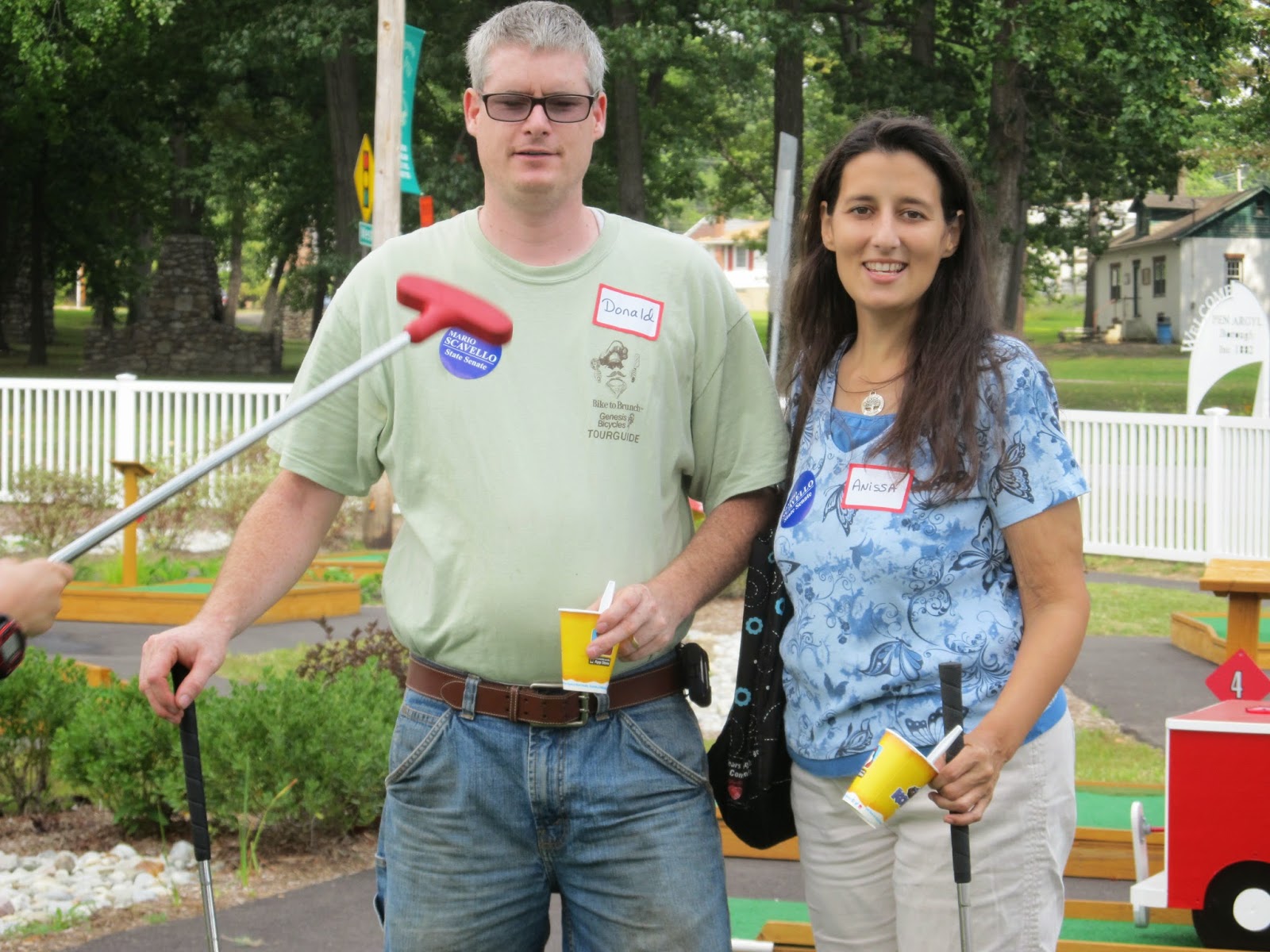 Speaking of prospective employers, Scavello stated we "need to be more proactive about bringing jobs here. He will do this by supporting legislation that provides tax incentives to businesses who make new hires. He also said that we need to cultivate more of the technology jobs instead of treating them pretty poorly.

"These kids are falling through the cracks," he told me, noting they take a bus to go their high school, then get on another bus to go to the vo-tech, then a bus back to the high school and a bus home. "They spend half their day on the bus!" he complained, noting that vo-tech students should be given all the educational tools they need at one location. 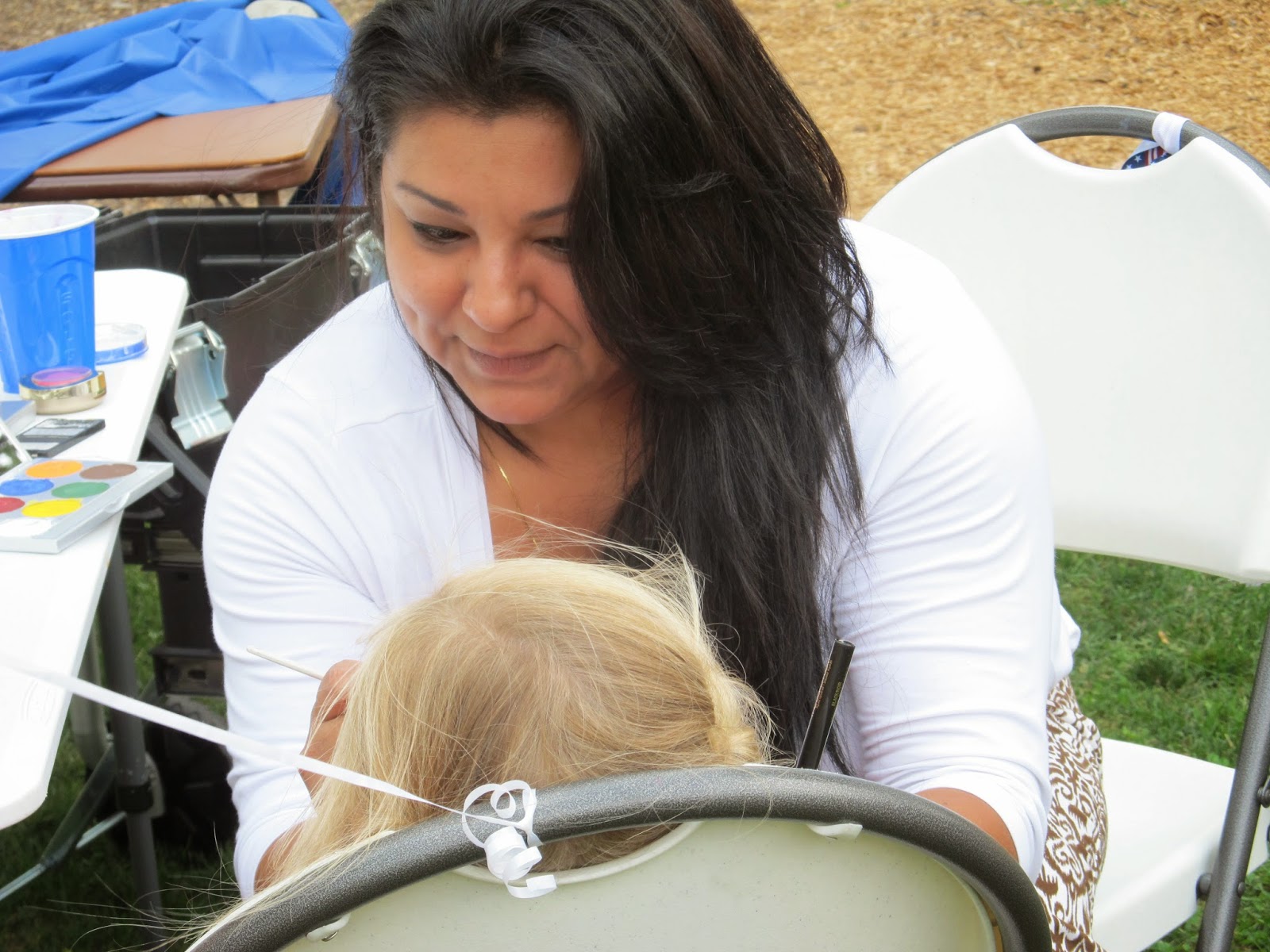 Scavello believes this will be possible, thanks to redistricting. He noted new districts like his are in growing areas where the damaging impact of high taxes are felt more acutely, and will result in new members who are more inclined to support property tax return.

Mark Aurand, Scavello's Democratic opponent, has blasted the gas tax in Governor Corbett's controversial Transportation Bill. But Scavello counters that this is exactly what is needed to fund infrastructure improvements, and is the best way to do it without raising property taxes. Below is his video replay to Aurand's campaign ad.

Does Ron Angle support Scavello? Did he attend at Weona Park and endorse Mario?

I did not see Ron, but he has told me before that he supports Scavello. I did see Marcia Hahn, Joe Emrick, John Brown, Hayden Phillips and Cynthia Miller. There were Monroe officials there, but I neglected to get their names written down. It was a very nice event. I like that Aurand and Scavello are disagreeing on the issues, but are both fairly classy.

Every time I fill my tank, I think of Scavello.

Eliminating onerous prevailing wage laws would have made road and bridge work less expensive instead of raising the gas tax. Scavello is part of the failed Republican do nothings in Harrisburg. No pension reform, no liquor reform, no property tax reform,....

Looking forward to your coverage of the Browne/Felton race.

"Every time I fill my tank, I think of Scavello."

Well, I hope the two of you are very happy.

"Looking forward to your coverage of the Browne/Felton race."

Really? I am disgusted by NIZ drafter Browne, and would be inclined to support Walter, but have not heard a peep from him. Plus, he managed to puss off the most energetic people in his party by insisting on running for party chair, too.

Walt is tall in height but short on ideas. No contest.

Walt is tall in height but short on ideas. No contest.

Was Brown seen riding on the carousel? From one horse's ass to another.

This guy is a shill for Corbett's hair brained policies, and has voted for all of his budgets. Very hard to believe he got the support of PSEA, given what those budgets did for education. I imagine there's some quid-pro-quo there. If you are satisfied with Corbett's leadership, go ahead and vote for him, otherwise Aurand is the better choice by far. Also, while he touts himself as a fiscal moderate, his stances on social issues, especially those important to women, are in the toilet.

"This guy is a shill for Corbett's hair (sic) brained policies ..."

You're demonstrably too stupid to pass judgement on anyone's hare-brained policies. That you went on to opine on education issues, makes your nonsense even more hilarious to read. Idiot.

Mario knows what he is doing and will help the area. He should be elected by a landslide. he is the best.

According to dictionary.com "hairbrained" is an accepted variant spelling of the adjective "hare-brained". In any event one typo does not an idiot make. The lack of civility in your response, however, speaks volumes about open mindedness, or the lack thereof.

2:05 spells judgment with an "e" and that "lack of civility" also tells me the comment comes from MezzacRaZy. She is a poor advicate for any cause.

MustyCrackage notwithstanding, judgement/judgment can go either way. Although West Easton is on this side of The Pond.

In the American legal world, it's judgment, not judgement. Mezzacappa repeatedly spells that word improperly, along with others, and gives herself away as she hides from the Sheriff.

Leave this poor young woman alone. You are constantly taunting her.

Perhaps Mark Aurand can explain how he would fix the failing infrastructure without the fuel tax. Mark Aurand, please explain what happens when bridges fall and potholes and ruts are worse than they are today,

Fix prevailing wages and use the gas tax wisely.

So the conservatives here are now arguing for, or at least defending, a tax increase while the democrats campaign against it. When did I go through a looking glass?
Perhaps the Scavello supporters can explain why he doesn't support taxing the fracking gas holes, but does support a tax that wallops the middle class?

As with most issues the transportation funding problems we face aren't a revenue issue it's a reform issue. Like education the answer isn't more and more revenue always but rather fixing the inefficient system.

First we have to acknowledge the relationship between transportation funding issues and land use decisions.

Most modeling exercises now take land uses decisions as an input and transportation "improvements" as output or a reaction. This is happening right now in LMT as we try to play a very expensive game of "catch up" since we let sprawling development get ahead of the transportation infrastructure that supports it. Basically we have localities making irrational land use decisions followed by induced traffic which leads to bloated infrastructure paid for with "someone else's money".

Because of this whole convoluted system it's really impossible to actually quantify the real public costs of certain road improvements. Pinpointing the actual long term costs of development projects is step 2.

Back to funding, for now the solution might be gas tax. At least that's a user fee. Since we have no idea the real big picture costs of infrastructure improvements I prefer those using the roads are the ones who pay for them. Use the roads more, pay more. Use them less pay less.

But in the end that is not the long term answer. We have to reform the funding system or after having raised the gas tax today shortly after we'll need to raise it again. Just like school taxes answer isn't more revenue constantly, it's Stop what we're doing that isn't working. Evaluate. Reform.

Go ahead and back him Bearnard!!! You bitch about Freeman never doing a thing. Mario is just the (R) version!!!

Funny seeing Phylis Hasse in this ad. She does NOT live in the State Senate district. She is best known for her efforts to break the sunshine laws on the Pocono Mountain Regional Police Commission.

She lives in Coolbaugh Township but as the Township Manager of Tobyhanna township was appointed by their supervisors to be on the Police commission. (One of the supervisors is the wife of former PMRPD chief Lamerton).

She along with all of the others connected to this story are also all connected to Mario Scavelo. As well as South Whitehall Twp. resident and former Chief Harry Lewis who lost his gun in the Lehigh Valley in 2013.

So as always with Scavelo there are credibility questions to people presented in his campaign material.

If you want to slam Scavello for featuring someone in his ad who does not live in the district, then you have to slam Aurand. Ed Del Viscio from OFA is featured in that ad and does not live here.

Name one bill Scavello passed Bernie???? He is Bob Freeman WITH an (R)after his name. A DO NOTHING!!!

Hasse is a tool for those who give her the most power. She has a reputation for being anything BUT honest up here. She protects incompetent cops who leave guns un-locked in their cars in the valley.

So an endorsement from a questionable person of ethics is of major concern.

Also, Scavello can be directly connected to EVERY Pocono Mountain Regional Police Commission member who is obstructing the Sunshine Act in relation to allow view of what was done when South Whitehall Township resident; former Chief Harry Lewis, left his tax payer owned police car unlocked at his home and allowed two LV criminals to steal it and sell it on the streets of Allentown.

The people covering this up are his closest political allies in the Poconos. Two of who were recently nailed for ethics violations. Makes you wonder what kind of person one is by the company they keep. I'm sure your friends deal with that on a daily basis for hanging with a "bottom feeding blogger". lol

Again, you seem to accept his questionable endorsements. I hear Mike Tyson is coming to endorse him next after his plug for Rob Ford in Canada yesterday.

And if he was so worried about bridges falling after Minnesota, why did he wait not 1, not 2, not 4, but 7 years to do anything??? He did nothing in the years following that.

He ONLY had a politico consultant give him this excuse recently as a reason why he supported that tax increase. He opposed this very same funding just a few years earlier.

Mario Scavello, Bob Freeman with an (R). Good at getting elected, bad at actually doing a damn thing.