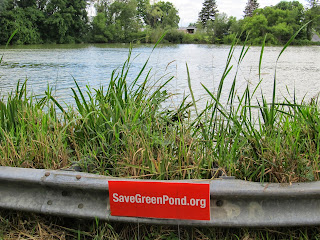 On August 18, when a controversial senior living community near Green Pond was pitched to Bethlehem Township Commissioners, over 100 people appeared to oppose the plans. Many opposed the idea of a residential development next to a what the Audubon has designated an Important Bird Area that attracts 162 different species.

Michael Adams, another ardent environmentalist who grew up in Butztown, was one of these opponents.

He was furious at Commissioner Michael Hudak. Although I missed it, The Express Times claims he was reading a book while the public spoke.

"I don't need you to affirm that right," said an angry Adams.

After that meeting, Hudak was asked by several residents what the hell he was doing. He decided to give an explanation at last night's meeting.

"I was reading the First Class Township Code," he explained, holding up his copy for all to see.

When Hudak saw the news account, without an explanation of what he was actually reading, "I was a little offended."

"One word makes all the difference," he added.

Although I was so busy watching the speakers that I had no idea what the Commissioners were doing, I am a little offended by Hudak's explanation. The Pennsylvania Sunshine Act gives the people the right to speak before elected officials take any action. That right means nothing if they don't listen. Whether Hudak was reading the First Class Township Code or Playboy is immaterial. He had a duty to listen. Adams perceived what Hudak was doing as a "studied indifference." He appears to be correct.
Posted by Bernie O'Hare at 9/16/2014 12:04:00 AM

He was intentionally ignoring residents, and there is no excuse for that.

Hudak should read before or after the meeting, not during it. He was rude.

I was at last nights meeting too. I believe what he said was he was fact checking all the erroneous claims that were being made by the supporters of save green pond and that he heard every word they said. Just because some people don't look you in the eye when you talk doesn't mean they don't hear you. Students look at a book and listen to the teacher all the time, doesn't mean their not listening. I bet even you Bernie can listen and reference at the same time. As for the ridiculous comments by 6:56 and 12:15, can't read before as you have to wait to hear the false staement first ! and I believe he stated then and last night that he heard every word they were saying. were you guys even at these meetings or are you "assuming" what you read is truth. Besides what he said last night was that he was looking at the township code not reading a book, as presented by the press and if reported truthfully would leave the public with two very different impressions. Then again truth doesn't sell or ignite the masses like lies and dirt do.
Get over it. The press was wrong again and their claims were not facts. Hudak finally called them out on it and now their pissed. Funny how things look when the shoes on the other foot. Always a fun time reading the morning whines, thanks Bernie.

9:41, I never heard Hudak say that he heard every word being said. Nor did i hear him say that he had been fact checking erroneous claims made by supporters of Green Pond, although that certainly makes clear where he stands on that issue. I did hear him say that he was not reading a book, but the township code, wish is a book. I heard him admonish the press for basically telling the truth. He came across thin-skinned and petty. Also, as i point out in my blog, he has an obligation to listen when people speak. When he had his nose in a book, as he apparently did, he was displaying an arrogance and "studied indifference" and was rightly taken to task for it. He seems to forget that he works for the people, not the other way around. I don't like the Express Times reporter who covers BT myself, but had I seen Hudak ignoring residents and reading a book instead of listening as required by the Sunshine Act, I would have noted it.

That strange fellow, Mr. Hudak was just showing his disdain for presenters that he always exhibits when he is on one side of an issue and they are making arguments that clearly show the merit of the other side of the coin.Whether he is reading material or propping up his thick head with his hand his body language is far easier to understand than a book of rules.He clearly demonstrates on every occasion I have had the displeasure to be in his presence an unfounded arrogance toward those who disagree with his short sighted,narrow views.His demeanor and haughty attitude towards the public are a disgrace to his office .

Bethlehem Township Commissioner Michael Hudak is consistently ignorant, rude and inappropriate as citizens speak. This is nothing new. Someone finally had the courage to respond to this unfortunate excuse for a public servant.

I wish you would say who you are and have the courage that Michael Adams and Larry Briody displayes. Maybe if Hudak sees this is a sentiment shared by many, he'll be willing to actually listen to the people he is supposed to serve.

Those of us who live in the Twp.are not going to use our names.
Nobody wants to be on the receiving end of this guys retribution.
We've seen him work before.

Mike Hudaks presence on the Township Board diminishes the entire body.
Are the other members unable, or unwilling to insist on a minimum level of decorum from this character?

What?! Hudak will never listen to anyone but Hudak. Clearly.

Couldn't agree more with 8:58AM. He also has an insatiable need for attention. The other commissioners may not agree with the public either but they don't act like asses consistently.

In a county with more than a few examples of underachieving elected officials, this guy is surely among the most embarrassing.

9:41 Please explain which were the "erroneous claims" made by supporters of SaveGreen Pond .org??

9:41 can't tell you what "erroneous claims" there are because he was reading during the meeting.

The ballot box is the ultimate arbiter in a democracy.