Dieruff - The Team to Watch 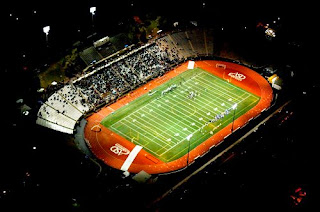 Dieruff's loss to the now 5-0 Bethlehem Catholic Golden Hawks at J. Birney Crum Stadium on Friday night was no surprise. Nor was the lopsided, 65-21 score.  Simmons sizzled. McDaniel mauled. But they played a team that is getting better, week by week. In fact, two years from now, the Huskies are going to be a threat for the Districts.

I won't beat around the bush. The chief problem at both Allen and Dieruff has been poverty. This has led to a transient population in which families move frequently. That often prevents the most athletically gifted students in the Lehigh Valley from excelling. A few things have stemmed that tide for Dieruff. I can't put my finger on any one thing, but have seen a lot of interest in youth sports in East Allentown over the past ten years. Is it the East Side Youth Center? The Wall to Wall basketball program? The frequent tournaments in which fathers and mothers watched their sons and daughters grow up?

Something good is happening. Instead of seeing a deserted J. Birney Crum stadium on Friday night, there was a bit of a crowd. Lots of proud families. One young man, about 7, told me several times that his brother was playing. I sat near one woman who came because she's an alumnus and is excited at how the kids are doing, even though she knows none of them.

Freshmen football players walked up and down the concourse, proudly wearing their Jerseys. I begged them to go easy on my grandson on Monday, when the Freshman team plays Beca, and they laughed.

You won't find a better football stadium in the Lehigh Valley. You also won't find better food, including funnel cakes.

On the field, I could see #50, Badid Haddad, a linemen who made a few key stops throughout the game. He'll be back next year. He gives it everything and  happens to be pleasant young man off the field.

Senior Shakur Lester (#6) took a kickoff all the way in for a score, and had several great long runs. So did Juniors Devante Robinson (#20) and Jayden Reyes (#1), who will be back next year.

For whatever reason, Dieruff is developing a core of athletes who grew up and have played in the Lehigh Valley. Tough and gritty, they know and have played the same kids who now play for Parkland, Beca, Central, Freedom and Liberty.

Another amazing phenomenon was the band. A reader observes, "They can't have more than twenty people who play instruments and I noticed two of the big bass drummers marching at halftime were actually football players who took their helmets off and never made it to the locker room! I was sincerely shocked at how loud they were, though; I never would have guessed they could generate that much noise."

I laughed when the Husky mascot pretended to pee on the Golden Hawk.

I did see a fight as I left, but it was broken up by the kids themselves. Another good sign. What I see at that football game is a much more hopeful prognosis for Allentown than the NIZ.

Is Dat on the team?

It's time you and your grandson movee to Allentown.

Have to disagree BO. Dieruff will never be a Parkland or Whitehall or Catholic School team. The main difference is the fanatic parent youth associations that work these kids from flag football all the way up to high school. The parents pay for camps and special instruction and the schools get the best coaches. The culture of those schools is for those kids to play together for years, not much transients coming through. That means a lot. The Catholic Schools seem to do well because they can pull in some top kids through parent recruiting at the middle school level in areas such as Whitehall, Parkland, Northampton, Easton, East Penn and so on. The socio cultural issues in the ASD are not conducive to the development of a regional top tier football program.

It is a shame, Dieruff has a lot of individual talent but they just haven't pulled it all together yet. The kids however are starting to buy in, which is huge. I wish them all the best.

"Good on You" Bernie,
That was a great uplifting report on the Lehigh Valley local secondary school sports scene. I hope some of these kids, and their parents get a chance to read this.....PJF

7:03, Dat is at Beca and loves it. He's wanted to go there since 4tg grade. He is on the freshman football team and will be playing hoops.

8:05, here's the thing. NOBODY had the good youth programs for basketball that Allentown does. They are playing at age 5 and crush all the powerhouses you mention.here's what happened. The kids playing on those youth programs stuck around those parents stuck around and kept the kids involved. So now,Dieruff is turning around. The Feeshman team is going to confirm or refute my thinking on Monday.

Is it the East Side Youth Center?

It's part of the answer. No idea about football, but I know kids from the burbs whose parents drive in to the have their kids play hoops there.

ESYC definitely is part of the reason for Dieruff's resurgence. Though its football program is terrible, its two tiny gyms handle the best youth basketball in the Lehigh Valley. Anyone who calls himself a baller has played there, and has probably played a lot. Over the years, those kids have developed a lot of pride and discipline, and it is now translating into other sports.

My grandson got his start there at age 5, in a gym so crowded they practically knocked each other over.

Committed volunteers like Coach Radio and others (I am sorry I do not have all the names) are walking saints.

There are other programs like Wall to Wall that have instilled pride in these kids. They have a cohesive core. Some of them have gone to Central. The others are at Dieruff. In my opinion, these kids are going to make Dieruff very competitive when they become upper classmen.

And yes. Parents from the 'burbs bring their kids in to ESYC to play real competitive basketball.

My grandson, who has been playing there with various team, already knows most of the kids at parkland, Liberty, Emmaus, etc., and they know him. His best friend Mickey is at Whitehall, and is going to be their PG in a year or two. There is a core of very dedicated kids. They are actually pretty scary bc they devote almost all their free time to sports. Not because they have to, but something inside them drives them.

I have a great deal of respect for these athletes from all these schools.

I'm glad I turned out to watch the Dieruff kids play.

Becahi look every part a team that is supposed to be # 6 in the state for the classification --- they have monsters on the line and backfield players with both impressive skill and size.

I was certainly impressed with Dieruff and will make it a point to see them again.

Both teams will win their next game. Take that to the bank.

Great sports column! As a high school football junkie, I walk to the games at JBC on the fall weekends. DHS is noticeably improving. I always thought Deiruff and Allen might need to field a combined "Allentown" team, but maybe not! I knew that Whitehall Parkland game would be the top regional game this fall. Way to go Zephs!

I knew Whitehall would be tough, too. Same type of gritty, tough kids there as at Dieruff. Parkland can take consolation in losing to an excellent team, and not by much.

Not sure about your prediction on the Dieruff v Freedom game. Freedom is another program having a great year after 4 win and 2 win seasons. I also like what I see at Dieruff on the wrestling mat. They are tough gritty kids. This weekend my money is on freedom though!

My bad. I thought Dieruff was playing one of the E Stroudsburg teams. They are playing away at Freedom. Not good for them.

gonna have to disagree that the number one reason that ASD high school sports teams cant compete is not poverty but the lack of a junior high sports program as a feeder. East side youth center along with South Mountain Memorial have great programs to get youths started in sports but it wasnt too long ago Allen and Dieruff were powerhouses due to the effectiveness of junior high school sports.