In Northampton County, Bloggin' is Dangerous to Your Health! 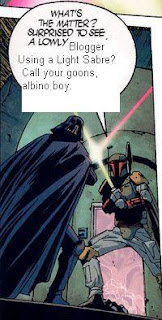 Last night, the Northampton County citizens' task force met a sixth time concerning our election troubles. It should have been a quickie. The only agenda items were approval of a much needed letter to the Department of State and finalization of a survey. But it was a long and rancorous evening before a packed house.

Physical threats. A goofy lawyer. Accusations that our local papers are lying. Complaints and compliments about Registrar DePaul. Political consultant Shawn Millan's compelling indictment of the elections office. This all made for a long night. DePaul and her Bucks County mouthpiece, brought in as a "buffer," spent most of the evening popping up and down like bobbleheads, trying to drown everyone out. The elections panel refused to let that happen. Peg Ferraro and Greta Browne repeatedly had to remind DePaul to let others speak. Finally, an exasperated Jack Bradt told DePaul, "We want to hear from the audience." I'll give you a blow by blow account, but that will have to come later.
Right now, I want to focus on events that occurred before last night's raucous meeting ever started. I knew it was going to be a rough night. The entire right side of the room was filled with DePaul supporters, including mostly the people who work for her. The left side of the room was full of Republicans, the League of Women Voters, voter rights activist Alan Brau and me. Express Times reporter Sarah Cassi shunned the press table, sitting instead in the back of last night's very vocal and rowdy peanut gallery, soaking in the ambiance.

As I picked my way through the crowd to find a seat, I saw something I hadn't seen in previous meetings. Northampton County Democratic chair Joe Long was in the house! He didn't look too happy to be there. And when he saw me, smoke started blowing out his ears.

"Oh, there he is. Hey Bernie, I hear you're gonna' have me for lunch." (Oh shit, he saw my Hannibal Lector post!)

"You think you're pretty funny, don't you?" (Not amused.)

"It's called humor, Joe. You should try it sometime." (Still cocky.)

"I'll fix your humor. Anytime you're ready, just let me know." (Now the steam is coming out of his moustache, too!)

"Pardon?" (I heard him, but always say that when I'm puzzled.)

"Anytime you're ready." (Idiotically triumphant. I wonder if he's packin'.)

Later in the evening, when I was addressing the committee myself, I mentioned Long's threats.

"That's not true. I have witnesses."

Earlier this week, an unnamed local party boss tried unsuccessfully to muzzle blogger Richard Wilkins. Democratic party bosses are very upset with bloggers for calling public attention to their attempts to fix the primary. Having failed at that, Dem party bossman Joe Long is now resorting to physical threats, and right before a public meeting!

These heavy-handed intimidation tactics might work in the loansharking business or against union scabs. But Joe, goon squads are a just a tad out of place in a democracy.

Besides, they've got the wrong guys. First, they go after Wilkins, who in fairness has been Joe Long's only pal in the blogosphere. Brilliant. Then, the party boss distinguishes himself and his party by physically threatening me. Hey Joe, we're just passing on info we got from LVDem. He's the real rat. So break his legs, damn it.

Maybe I'll challenge Long to a duel or something. I've been practicing with my lightsabre all night.

I thought there was an unusual number of people hanging out on my front steps last night. Didn't really think much of it at the time.

If Long's packing, it's only his lunch.

Where'd you get the cool "Star Wars" picture?

That's some vivid picture. Was the rest of the meeting as contentious?

It was a wild ride.

We could save a lot of money as a county if we just built a steel cage in Court Room 1 and let them settle things that way. That's the one way I'll call off from the night job and come down there to watch these meetings too.

You better be careful Bernie, Joe Long may put a "I hate Bernie" bumper sticker on his car. It will fit in nicely with all the other bumper stickers.

You guys are giving Long much more credit than he deserves. He has no power. However , I always hear Angle and the rest of you go on and on about how he controls Grube and Mcclure and whatever.. Any person that knows local politics knows that's not the case. This endorsement issue with Bennett and Long is silly also. Who cares if he (allegedly) wants to clear the field. No one listens to him anyway. You give him much more credit than he deserves..

Tom. Dig the name. I know Long has many enemies, and some of them are powerful Dems. I don't think Long controls Grube, although he tries. I do think Long, McClure and Dertinger have been a dangerous combinmation. Long in particular, makes Dems look very bad. If he has no power, why is he chair? I'm sure I blow it up in my mind, but there's no doubt in my mind that he tries very hard to impose his will on others.

Bernie, you have told us many times why he( Joe Long) is chair? Because he held an illegal election and only invited his friend.

Well, guess what! There's another meeting this Saturday in Nazareth. It's not on the website. Long tells us all about a golf tourney in October but a meeting to preselect primary candidates is not listed. In fact, not all committee members have been notified. See a pattern?

I am still wondering how the party can endorse candidates in a primary election. It goes against what I understand the primary to be about.

Joe Long and his "clearing the field" politics is why Northampton County has problems.

I am glad I am in Lehigh County where all the problems are blamed on Allentown.

The State parties endorse alot in primaries. It was rarely done at a County level before Long. The problem is that these endorsements help no one. Actually they can be more of a problem as seen in Sam Bennett's case.

party endorsements are unnecessary. It's a left over relic of the machines in urban settings and I don't care if the state party, national party or ward party does it. Let the voters decide.

Yes, it's true. I'm Louis Hershman. Bet you don't know where I live!