Northampton County's Judges Should Not be Retained 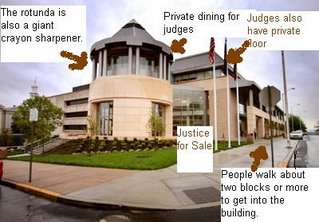 Northampton County Judge Steve Barrata appeared two weeks ago on a local radio talk show, telling listeners that the new courthouse expansion is just magnificent. And it's true. It's great for judges. It's just everyone else who suffers. The expansion is at least $2 million over budget and way behind schedule. Contractors are milking this project for as long as they can. I'd love to know the labor costs for landscaping and hand cut stones for the wind sensitive fountain. I'm sure they are at least twice what was budgeted. Taxes increased 66% over two years and over 100 positions were eliminated to pay for this monstrosity.
So why was Judge Barrata on the radio, and why was local lawyer Don Russo kissing his derriere? Elementary, my dear bippy! Barrata is up for retention next year and he wants the masses to know he's a swell guy.

I don't think a single judge should be retained. Hey Steve, where were you when county employees were getting sick? Did you speak up when over 100 positions were eliminated to help pay for your expansion? Where were you when your $15 thousand judicial lunch table had to be sawed in half just to get it in your new building? Where were you when judges decided that all members of the public had to be searched when they entered your new building, even if their business took them nowhere near a courtroom? What talk show were you on to announce that you would refuse the new pay raise? How can you take a nickel when the people who work under you have seen nothing for nearly four years? Why couldn't you open your mouth about any of the judicial excesses? How can you put up with a court administrator who is paid $102,705 per year as a full time administrator, but who is nevertheless allowed to supplement his salary by working as both constable and zoning administrator in Franklin Township, New Jersey? These are just a few questions that Barrata should answer if he expects to remain on the bench. I'm not holding my breath.
Posted by Bernie O'Hare at 11/27/2006 09:01:00 AM

The day I distributed the cartoon of Community and Economic Development Director Vince Dominach shacked up with wife of a New Jersey dentist in a motel room in Myrtle Beach, South Carolina, next door to room on one side in which the denist was banging Dominach's wife,and on the other side the room containing both couple's minor chilren, whom the couples had brought along for the "ride."

I dropped a copy of the cartoon off in County Court Administrator Jim Onembo's office, with his secretary, and headed for the courthouse exit.

Before making my getaway, I heard myself being paged over the intercom, and I recognized the urgent voice of Onember ordering me return to his office.

I ignored his plea and without breaking my stride left the moseleum and monument to incompetence, corruption, and immorality for fresher air.

By the close of government business (mostly "monkey business") that day, Dominach, whose job Onember and oher county honchos like his boss County Executive Glenn Reibman were trying desperately to save, had cleaned out his desk and, with pink slip in hand, followed me to the exist - for good.

Dominach was succeeded by Drew Lewis, also nominatd by Reibman, who when appearing before county council for the appointment's confirmation, refused to disclose the identify of the clients of his private, side-line consulting busines that he also operated.

I have referred to this cartoon previously on your blog, and you have even commented on it.

You are an Ornery old fart, as the Naked blogger says. Don't you ever get tired of poking the mean old bears with that sharp stick? LOL
You could easily have written that piece about the Judges in Lehigh, just change the title. What will we get for 80+million?
Why courtrooms with 14 foot ceilings, of course! I think the judges need the extra headroom to let their inflated egos be comfortable as they preside over cases. That is my theory!

On August 9, 1988, reporter Don Rosselet of the Belvidere, Warren County, New Jersey, bureau of The Express-Times - before it fell under the control of The Excess-Times and its president and publisher Martin K. Till, wrote:

"Givens said artifacts along the railroad, built by John Blair in the early 1800s. should become a part of the museum exhibits."

"Copies of an open letter to state Sen. Wayne Dumont Jr. asking him to support the purchse of a rail bed in Warren and Sussex counties were handed out Monday in front of his office, but the lawmaker wasn't there to receive them."

"Dumont was in Trenton on Monday for a Senate session when Givens began handing out the letters to passers-by on South Main Street, where the lawmaker's district office is locaed."

"The letter urged Dumont to support state acqusition of the rail bed 'to benefit the economic life of the district you represent,' saying it would help the revitalization of Blairstown village [Givens's residence before moving to Easton in 1987]."

"'Please do not throw this investment in New Jersey's future away.' the letter urged the senator, who has been an outspoken foe of Green Acres and its parent agecncy, the Department of Enironmental Protection."

"At the same time, he [Dumont, with Warren County state representative Garabed 'Chuck' Haytaian and the Warren County freeholders] steadfstly opposed Green Acres' proposed expenditures for new park land in the district, and those funds were not approved."

Disapproval included those funds that New Jersey had already appropirated, together with Warren County and Phillipsburg, the town that had competed successfully with other municipality's as the official site for the railroad and transportation museum."

The site and funding was witched to Franklin Township, New Jersey, where Northampton County Court Administrator Jim Onembo is a constable and the township's zoning officer.

Chris, In this county, judges were quick to appear en masse in an intimidating display before council when it was merely suggested that some of the fat be shaved from the courthouse project. But they didn't utter a peep when employees became ill or taxces increased or employees were laid off. They said nothing when they got a hefty raise while employees have seen nothing for nearly four years. Bricks and mortar do not perform county services. That's done by the people inside those marble tombs. I think Lehigh County's administrators might have a marginally better grip on their judges but you folks have more or less the same problem. I think it's time to JUST SAY NO when these pillars of our community stand for retention.

Billy, Good to see you back in action.

OFF WITH THEIR HEADS!

They seem to have forgotten that we have to vote for them.

Is not the same thing poised to happen in Lehigh County???

President Judge William H. Platt will shoot-down any but the $80M+ proposal for his new palace.

Why is it that these Judges have any say whatever in the project, as long as the end-result meets State standards?