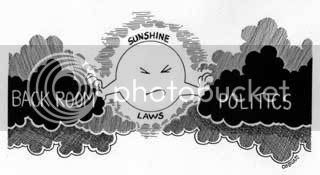 Since I've started this blog, I've written twenty-eight posts concerning different aspects of the Sunshine Act. I've even filed lawsuits against both Northampton County Council and Nazareth Borough. It's safe to say that I'm a little nutty when it comes to the Sunshine Act.

But open and accountable government is actually more important than politics. Democracy depends on it.
A status conference is scheduled next week in my suit against Northampton County. That's no biggie. You just tell the judge the case is moving along. It lasts about ten seconds. Notices are usually sent only to the county's lawyer.

But someone screwed up.

Every member of council was provided with a notice. And they went ballistic, not really knowing these status conferences are just bullshit. Council Prez Grube, who had just started talking to me again, turned his head away as I walked into council chambers. Before the meeting started, he told county lawyer Karl Longenbach that something had to be done.

Although I filed this case nearly a year ago, practically nothing has happened. I believe Council appointed council members Branco and McClure behind closed doors, but am not really interested in pursuing the harsh remedy of having them removed from office. They will face the voters soon enough. I just want them to agree to follow the law. Council has five new members, none of whom has been trained in the Sunshine Act. One of them has already violated the Sunshine Act unintentionally since his appointment, and he's a lawyer.

Council went into executive session last night to discuss this litigation, and Karl Longenbach and Leonard Zito worked a miracle. Council has agreed to undergo Sunshine Act training. County lawyers will prepare a Sunshine Act manual for each council member, and they have agreed to read and abide by it, to the best of their ability. Council is not completely happy because I might gloat. But I'm not happy either because I have no judicial determination they violated the law.

Since this proposal makes both of us miserable, it must be fair. So I'll end my Sunshine Act litigation against the county. I won't even wait for the manuals and the training. I'll take them at their word, as relayed to me by a county lawyer. And I commend Council for doing the right thing.
Posted by Bernie O'Hare at 11/17/2006 02:52:00 AM

I have no doubt that 99% of the time, they are trying to do the right thing. The other 1% includes attempts to tumb their noses at Ron Angle or power grabs.

It would be great if council would take some time to pass that sunshine manual along to the borough councils and the township supervisors. This might be an opportunity for council to show that it is serious about open government.

LVDem & Rad, Thanks for the nice words. Although I believe I could prove a Sunshine Act violation, I know the odds are always stacked against someone who challenges a governmental body, as they should be. I had discussed this possibility both with Angle and Dertinger early this summer. Angle had no problem. Neither did Dertinger, but he was concerned it might set a precedent.

It's actually a very small concession by Council and I have no intention of gloating. In fact, there's really no reason to gloat. I think they will be a better body if they follow both the intent and letter of the Sunshine Act.