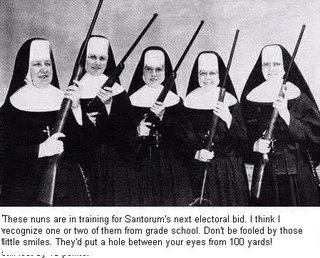 One Pittsburgh nun has a slightly different view. And the National Catholic Reporter concludes most of Santorum's "more controversial thundering from on high about moral matters has nothing to do with Catholicism, or any expression of Christianity, for that matter." But religious extremism is acceptable in this country so long as it doesn't come from Muslims ... or Jews ... or Buddhists ... or anyone who isn't a God-fearing Christian.

I love how the model of the buttons is Black. The ONE group most unlikely to vote for him. Some irony there.

I hear though he will have the "Zoophile" endorsement since by comparing Beastilaity with Gay sex (cause men may do it doggy style) he slammed gays yet legitimized people who look at goats and go "YES, I LIKE!"

Sorry had to drop a Borat refrence.

Spike, I have to catch that flick!

Any of those nuns your uncle, Bernie?

The one in the middle w/ the beady little eyes.

Thought for sure the nun on the far left was a dude.

Hey...on a (slightly) more serious note, you aware of any great blog sites over here on the "dark side of the mountain" in Monroe County? Would love to find one relative to local politics up here (which seem very different, even though the Valley & the Poconos are only separated by a narrow ridge a couple hundred feet high). I've searched a couple times, but like Dubya, I don't "do the Google" all that well. Thanks.

Jim, Monroe County is a fertile field for blogging. So far as I know, the closest dude is Gort. I did a quick blog search and found nothing, but I'll keep my eyes open.

They should invite Cheney.

Thanks for the quick looksee for me, Bernie.

Yeah...with a DA (now outsted) caught molesting his daughter in front of God & everybody at a Hillary Duff concert; urban street gangs running amok through our forested subdivisions; the sprawl machine trippin' the light fanatastic at warp speed; the county quickly morphing into NYC's fifth borough; the region's biggest developer recieving all sorts of "conservation awards" (truth is truly stranger than fiction); the most gerrymandered political landscape in the Commonwealth; and skyrocketing crime in the West End with no local police protection...I agree with ya that Monroe County is certainly fertile ground for blogging.

Somebody please come blog us!

You'd be a welcome neighbor & great Pocono blogger. But you're a hardwired Valley Boy, Bernie. You'd miss the Forks of the Delaware & the House that Dysfunction Built down there in NC.

I admit I'd miss the LV. But Monroe sounds like fun. Why not try it yourself?

I knew you'd say that!

But I'm not politically savvy...& that, you can't claim!

Bernie's not polically savy. He just shows up at every freakin' meeting, scares the crap out of little kids and whines... alot.

Go to a county council meeting every month or so, give your impressions. Better yet, when you are really feeling lazy, open up the paper and find your nearest municipality and trash it's leaders for a while.

It's quite fun really.

But bernie, I'd be glad to help you move. Just tell the police that the man in the ski mask is actually helping you, not robbing you. You've been cutting into my market since you started.

Now, back to our story......
It's Ricky's ego vs. his wallet. Is it Pennsylvania Ave. at a few hundred thousand per year or K Street at, perhaps, millions. I'm betting Ricky says "show me the money!"
dg

dg, You've always got an interesting way to say something.

LVDem, Not even slightly true. I'll stop screwing around for a second to say your analytical skills are very impressive. I thought only Rs were that clever. You're a must on any local tour de blog.

I grew up in Tobyhanna (or as we called it growing up TOBYHORROR!)

Last election I was there for before moving to Easton was the Original Judges race in 2003. I was a election day volunteer for Art Zulick.

Glad to say I work for the RIGHT man for the job NOT the pervert the GOP backed!(And Zulick and the heads of his campaign were "renegade" republicans for refusing to back Mark Child Molester!)

I hope you don't live in the 176th the Scavellos are assholes. I grew up with Mellissa his snobby youngest.

I keep telling my folks to move to the valley they hate it up there. But they keep staying.

I grew up in NC, but have spent much of my adult life up here in MC. We've (my wife & I) lived in practically every municipality up here. We usually stayed put for about three years...just enough time to keep one step ahead of the law before moving on. Finally settled down & bought a place here in the 118th.

We lived in Toyhanna - or as we called it, Twobanana - for a couple years. I guess it was actually Coolbaugh Township...just outside the "city limits." We lived in the Old Pope Homestead on Pope Road. Nature folks that we are, we really loved it up there on the Pocono Plateau. The night sky was incredible...stars seemed so close you could touch 'em.

Its become a love-hate thing for us living up here now. We love the wilds - or what's left of it. But the nonstop construction & constant immigration of city folk...or "cityots," as I affectionately call them...is taking its toll...the sprawl, the traffic, the NYC attitude.

And that attitude's contagious. I often find myself as big an asswipe as the folks I rail against. I used to think I was tolerant of other cultures...but when I hear that loud, obnoxious Far East accent...as in Far East of the Delaware River...I get real ugly inside my head. That can't be good.

Waitin' to hit the lottery bigtime so we can move to Bumfutz Nowhere. Till then we remain miserably happy here on the dark side of the mountain.

(I think Bernie might be on to me, so I've taken an alias in hopes of throwing him off.)