Early Reports of Vote Fraud in Lehigh and Northampton Counties 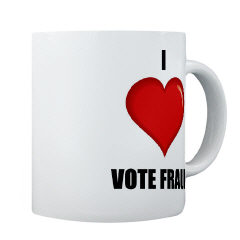 This morning I've received several disturbing reports from fellow Democrats. In a non-presidential election, most of us have voted six times by 10 am. But today, a bunch of us were caught after voting only five times!!!! Those damned republican electronic touch screen voting machines are rigged. How the hell are we supposed to win when we only get one vote? Fortunately, I still have voter registration cards for about 70 dead guys so I'm going to vote those now. Then I'm getting my protest signs. I think I'll chain myself to a Diebold or something. First, the Dent Nine. Now, the Diebold One.

Update: Holy Cannoli! There really is a Diebold One. Some wingnut pranced into an Allentown precinct this afternoon, and used a metal cat paperweight to trash an electronic voting machine. "Die, Diebold, Die!" The Morning Call's Bill White has already compared this with another wingnut who stormed St. Peter's Basilica and hammered the hell out of Michaelangelo's Pieta. Huh? A Diebold voting machine as the Pieta? Bill, Diebold won't be happy with you for that insult.
Posted by Bernie O'Hare at 11/07/2006 08:30:00 PM