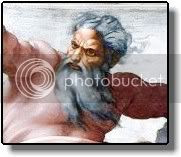 Somebody must be slipping funny stuff in Pat Robertson's age-defying protein shake again. Last night, he told his CBN 700 Club audience that the Kerry joke and recent Iranian missile tests are a gift to Republicans from on High.

But the Almighty flatly denies He had anything to do with either incident. In a late night telephone interview, he said "Look, I'm getting a little sick and tired of that old bastard. Wait until the next time he tries to do a 2,000 pound leg press. Missile tests a gift from Me? What the hell is he smoking? If I wanted to send a gift, I might send a coffee mug or something, but missile tests?" Before I could ask another question, the Omnipotent One hung up. I think he's pissed. It's thundering all over.
Posted by Bernie O'Hare at 11/03/2006 12:40:00 AM

Email ThisBlogThis!Share to TwitterShare to FacebookShare to Pinterest
Labels: God

Are you sure it's thunder, what did you have for dinner?

The only word that comes to mind when I read or hear about another one of Robertson's pronouncements is "asshole." And that's the spot his thunder eminates from.
dg

dg, Personally, I'm taking a shower. I think rapture should be here any minute and I want to be ready.

Personally, people who claim God is on thir side scare the hell out of me. Correct me if I'm wrong, but isn't this what "Islamic fascists" think?

You need to run out and get the new "King George Bush" version of the bible. For excerpts, please feel free to check my blog. Is that okay with you Bernie?

On the subject of jokes

I always referr to him on Talk radio as "Osama Bin Robertson". He represents the "Al-Christa" wing of the GOP.

The only pepole buying his "fatwas" are stooges like the Minute Klan.

Ryan, That's one of the most biting satires I've seen in some time.

If churches are going to preach politics from the pulpit, they should start paying taxes.