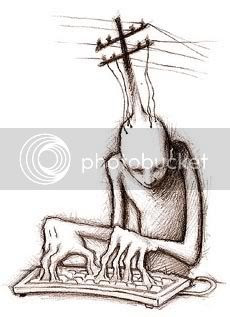 A business coalition has hired two political consultants to tell you why you need a wider Route 22. They call it the Lehigh Valley's Main Street. Some Main Street. Unless you barrel along near the speed of light, someone will run you off the road.

There's another Main Street in the Lehigh Valley, a place where people can say Hi as they tool by, exchanging both ideas and insults. It's the Lehigh Valley blogosphere. And since my last report, it has grown. Time to fill you in, from the politically oriented to one containing some pretty good poetry.

The new local political blogs
Green Dog Dem: What the hell is a green dog Democrat? A green-dog Democrat is a cross between a yellow-dog Democrat and a blue-dog Democrat -- a moderately progressive, thinking Democrat who is liberal on some issues, moderate on some, a little conservative on some, ambivalent on some. What the hell does that mean? Beats me. I heard the Lehigh Valley Greens are suing for copyright infringement. The only thing I know for sure about this Green Dog Dem is he turns red whenever he sees anything that ends with cc, whether it's DCCC or HDCC. This dog should focus his anger on the SPCA and get a distemper shot. He knows a lot about the state house and its Machiavellian ways.

True Democrats of the Lehigh Valley: Right after losing a race for a state house seat against a well-financed Doug Reichley, Chris "Blue Collar" Casey took no time off to lick his wounds. Instead, he started a new blog. It was originally called True Democrats of Lehigh County, but there aren't any. So he renamed the blog, and invited a core of eight bloggers to participate. He even invited me, although I change parties more often undies. In a matter of days, there have already been twelve posts from very different people. This blog has potential and Casey would probably add you to his team of bloggers if you'd like to do an occasional post without having to go through the hassle of setting up a blog and preparing regular posts.

Lehigh Valley Crack Addict: But he's not addicted to crack. He craves blogs, and has passionately blogged topics ranging from the U.S. Congressional races to The Morning Call, which he's convinced is being run by pod people. His latest entry, Allentown Love Feast, is his best effort to date. He's proposing that Mayor Ed "Ironpig" Powlowski and Allentown city councilman Lou "I only sprechen zie English" Hershman duke it out in a charity boxing match to reduce city debt. Although I doubt this would bring in a dime, we all like to see pols beat each other up.

J. Spike Rogan at Large: Sixteen posts on election day. In addition, this Easton blogger was broadcasting on internet radio and posting comments on all the locals. Need I say more? I wonder if he sleeps.

Some Local Blogs that Don't Give a Rat's Ass About Politics
Retro Riot: Were you looking for vintage Halloween gear? Stuck in the 60's? Vanessa Williams has answers.

Fab Finds: This is yet another Vanessa Williams production - a virtual guide to local antiques in this area.

Zen Dinosaurs: Anyone who can devote a post to a discussion of Spongebob Squarepants is OK in my book.

What's Better than This?: This is an uplifting and iconoclastic photo blog.

Revelation Park: Poetry with a hint of zen.

My father sat up in his hospital bed surprised
and dropped dead light as a feather.

Already in his youth before his head
hit the pillow.

Update: I missed a political blog. It's Lehigh Valley Common Sense, a collection of timely posts by a semi-normal white guy who likes to work out and go to the beach. He may be a Democratic committeeman but welcomes conservative voices. His blog is oriented mostly to national issues. His latest, however, deals with our new Democratic leaders. Like the rest of us, he just loves Bill DeWeese.
Posted by Bernie O'Hare at 11/15/2006 10:22:00 AM

I do work at a Coffee shop and get a free pound a week of beans.

Stay tuned, Bernard. There's a whole new blog a'comin... The LVCurmudgeon, who has seen it all, heard it all, and doubted it all. The LVCurmudgeon has been on all sides of the fence, inside and out, and even on the top, beloved by some (few, let's be honest from the start) and hated by many, and anxious to play Robin Hood in this great world of the Sherwood Blogosphere. From Easton to Trexlertown, Coopersburg to Upper Mount Bethel, the LVCurmudgeon will skewer the rich and powerful and political -- and loud-mouthed -- and defend the poor and voiceless and unconnected. Look, up in the blog, it's a bird, it's a plane, it's the ...

Isn't it funny how it would cost damn near a billion dollars to expand the US 22 highway, yet th internet highway in the Lehigh Valley has expanded exponentially, and didn't cost a freakin' dime!

sniffle, sniffle... I remember when it was just you and me Bernie... remember that! Those were the days... 6 months ago.

Yeah, but LVDem, isn't this more fun than just you and a cross dressing, bikeriding, mean old man, now that a morbidly obese bald guy, and a bunch of lunatics who ought to be in an asylum are posting?!

LVDem, I just hope Naked Lehigh Couny Blogger, aka DemFly, aka Lehigh County Redneck, aka Musings from Mudville, is happy with her latest blog. I'm getting dizzy.

I hope I see the curmudgeon soon.

All right you horny toads, you want to see a picture of me? I'll find something appropriate and put it up for your hormone driven souls. I've got a picture from my pole dancind days at a place called Wolfie's strip club that would probably rock your little worlds, or maybe one in my Army Dress uniform,,, nah, that's toooo chaste. How about one of me in a tank top at the firing range? that has possiblities. Or how about when I dressed as "Xena" for Halloween?" Which would you guys like?! I will not, however, be exposing my goddess body "Au Natural" as you say, because I deem none of you worthy. Yes, I have blogged naked, and the truth is Bernie got hurt Friday because he was spying on me as I walked naked through the woods in New Tripoli. He just thinks he tripped.
The voting starts now you dogs in heat!

I have a new post on slots and why its not REAL gambaling!

Holy Crow, I'm afraid to vote! I'm not touching this one!

Hmm. Pole dancer or army dress? That's a tough one. I'm voting for the pole dancing pic. I wonder if it's a polka.

Yo ho ho, Dem (Fatale) Fly on the Wall, I herewith cast my vote for that pic of you dressed as Xena. Only a Princess Warrior chick of that magnitude could have from New Tripoli knocked Bernie off his high horse at Hexenkoph last Friday.

Post that pic you cyber hottie you & I suspect the south poles of our collective "little worlds" might grow globally bigger!

She can blog naked all she wants, she has no effect on me. On the other hand if LVDem blogs naked, hmmmmm.

Oh, and Bernie, the rumor mill is saying you're walking funny after that tumble in the woods.

PaPro, I always walk funny. The sticthes come out tomorrow, and that is when I suspect I'll be looking like Frankenstein. Some say it's an improvement.

Dem Fly, I love a woman ina uniform. Give me an order!

I'm thinking this picture of me on horseback wearing chaps and spurs might stir some comment. My Daughter likes the picture of me in a strapless red gown, because she says I "look like a princess.
It's tough being a goddess.

DemFly, I will say no more until the bandages are off.

Thanks for the mention Bernie. I began my Fab Finds blog last February, so according to what LV Dem said, you were in good company, even six months ago. I enjoy reading both of your blogs. Keep it up!

Vanessa, You have THREE blogsd. I sure would like to know how the hell you do it.

Haha. It is tricky. I do have some overlap where I can recycle some content, but really I just find it fun. It's a lot of researching and reading, but I would do that anyway. I'm always on the lookout for things to do, and the next new thing to hit the Lehigh Valley. Plus I've lived here my whole life, so I have a lot of information stored up. The blogs let me share my wealth of knowledge with others while improving my writing skills. It's great.