Who Let the Dogs Out? Bethlehem's Dog Park

Bethlehem proudly proclaims its 72,000 residents have a "rich colonial and industrial history." George Washington actually did sleep there. The Christmas City is home to the oldest Bach choir in America. Its August Musikfest draws a million visitors every year. And Bethlehem's Liberty Hurricanes are district football champs for two years straight. But what really sets Bethlehem apart, at least in my view, is that it is the only municipality in the Lehigh Valley with its very own dog park. I spent several days there during the Thanksgiving holiday. It's a real treat for both canines and their human companions.
I'll be honest. The very notion of a dog park initially struck me as decadent - just another sign that we're going to the dogs. Why can't people just walk their frickin' dogs? What's next? A cat park? Hamster playground? Well, as is the case with so many other things, I was completely wrong. I pretty much spent the weekend there. It was both more fun and a lot cheaper than a day trip to Philly or NYC, although I am scratching myself a lot.

What you do is walk inside the damn enclosure, pretend you're from Bethlehem by doing a chicken dance or something, take your dog off the leash, and watch her romp. She's a completely different animal than the one who yanks at your leash. Most dogs are completely social. They run, jump, play bite, growl, dump, growl again, run around some more, dump again, and generally have a good time. I swear they're smiling. In addition to the dog, I also let a seven year old boy off his leash, but he had to clean up his own dumps. I had as much trouble extracting him from the park as I did with the dog. 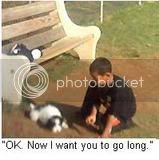 Over the past three days, he met greyhounds and whippets, and saw firsthand why they are rated the fastest dogs in the world. Man, do they fly! He saw everything from lumbering English mastiffs, the world's largest dogs, to chihuahuas, the world's smallest. He can tell you about an intelligent German Shepherd who stole his sandwich as he was walking towards the park, a gigantic Bernese Mountain Dog who played gently with a three pound jack-a-poo pup, and basset hounds , who perpetually patrolled to bark at dogs stepping out of line.

What also amazes is just how damn nice people can be. I've wasted years running bike paths throughout the Lehigh Valley, especially along Sand Island and in Palmer Township. Most people just don't want to say hi when they're out for a walk or run, even with their dogs. But at the dog park, people actually spoke to me, even though I now have ridiculous gashes on my forehead and nose. Maybe they thought I was one of the dogs. I did get a milkbone.

A few people came with no dogs at all. They liked being around those rolling fur balls.

Obviously, a little puppy or sick dog would not do well in a dog park, and you have to keep an eye on your pet at all times. It's basic common sense. One fellow decided to test whether the Doberman he picked up at a shelter three days earlier was social by bringing him to the dog park. Guess what? He wasn't. I would suggest checking out the park for a few minutes to make sure there are no problems and to leave if a dog or its owner starts acting strangely. Must be why I ended up alone.

There are only 29 dog parks in Pennsylvania, but the Lehigh Valley may soon have its second canine playground. Nazareth approved the concept back in July.
Posted by Bernie O'Hare at 11/28/2006 07:02:00 AM

Can you catch a frisbee in the air?

As the proud servant of 3 female Cocker Spaniels I wish we had a dog park in Trexlertown. However, I have a very large yard, and the invisible fence concept, but I think it is more to keep me at home than the dogs.

Gort, I sure can, but I stopped lifting my leg a few years ago.

Chris, Well, there you go. 3 cockers and a yard. uo've got your own dog park. I'll be over tonight.

Hell just go to the democrat blog, we've got a green dog, a Sawlty Dog, and a crack addict. Sounds like 3 guys you'd find at the Homeless shelter.

Chris, Aren't those the names of your 3 cockers?

Nah, the dogs are Crazy sally, Lucy and Ethel Mae. Though I have considered that sally suffers from ADD.

LST, Would you mind repeating that? I wasn't paying attention.

With a name like O'Hare, I'd be careful around greyhounds in an open park. They find hares fascinating. Even though some folks have large yards, it's still good to get the dogs out to meet other dogs and to socialize. Its a good idea to have a mzzle handy (not neceesarily on the dog) for the first few visits - just to make sure. I have 4 greyhounds and they love the chance to run, do a little informal racing and then just wander around and play with the other dogs. We have a great dog park in Manheim Twp. near Lancaster. It has 2 sections, one for lrge dogs, one for small dogs.
Let 'em run, you enjoy and meet a few people with the same interests.

Tom, Thanks for your comments. I just found out last night about a dog that is faster than ANY other land animal over a 3 mile course. Greyhounds are fast, but they don't run 3 miles. Chetahs are faster than anything, but they only run about 50 yards. The dog I speak about, the Porsche of all dogs, is the Saluki. It can ruin 3 miles faster than any other animal in the world! It looks like a greyhound but its ears are a little more furry.

Is it true that during Musikfest, all the Elvis impersonaters gather at the Dog park and do a rousing rendition of "I ain't nothin but a hound dog?!"

Now Bernie, that wasn't nice to tease us with such interesting facts about the Saluki without providing a WIKI link.

Strange that they don't mention that particular outstanding speed attribute though. Maybe I missed it. It does look like a Greyhound though.

Tom, Thanks for the link. There was a show last night on PBS about dogs, and i watched it. That's where I learned that they, and not greyhounds, are the fastest dogs. And over a three mile distance, no land animal is faster, not even the cheetah. They run . A cheetah can run 70 mph but not for 3 miles.

We are having a meeting this Wednesday on trying to get a dog park in the Slate Belt Area. If you have any advice as we are just starting at 'square one' it would be welcome. I live in Pen Argyl. My nam e is Jim Coley

Jim, That's terrific. Nazareth is starting one this year, too! My email is BOHare5948@aol.com. Drop me a line, and we can talk. I'll put you in touch w/ Jack Herbst, who is getting it going here.

You're probably best off with two enclosures - one for larger dogs and one for dogs under 50 lbs. It's good to have a nice grassy area. It will also be good to have a pipe that runs water into the place if possible so the dogs can drink. It would be good if plastic bags werre available so owners could clean up after the dogs. The weather on Sunday will be good and I intend to visit Bethlehem. If you have some time, you should check it out. They do a nice job.

You would think that with all the parks in Allentown, Pa there would be at least one dog park. I live in Salisbury township and would love to know how to go about getting a dog park in my area. Any advice? There is one park, Cedar Beach Park that is so big it could be sectioned off to make a dog park. Feel free to email me any info you may have if it's too much to past here.
Thanks :)!

I also live in Salisbury too and i would love a dog park somewhere close! Our neighborhood has become like a dog Keeping community! I think one would be terrific at Lindberg Park!