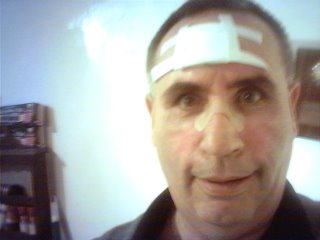 Yesterday a reader suggested I was up there on my high horse. But sadly for me, I was actually knocked off that high horse on Friday night.

I had dinner at a friend's home on Hexenkopf Road in Williams Tp. Yes, this is the Hexenkopf that translates to "witches head." Hexenkopf Road just may be the scariest place in the Lehigh Valley. It leads to Hexenkopf rock, reputed "meeting place of witches, who congregated to sing, dance, and plot vengeance against the townsfolk. The rock has a number of legends connected with it, covering everything from ghosts to disappearances to suicides."
Sometimes I walk along that empty road, and it's pretty damn scary. I've seen menacing turkey buzzards refuse to leave a carcass in the middle of the road as I pass by. And it becomes eerily quiet as I force my way up a steep hill. Abandoned homes can be seen here and there, and I start wondering why these folks left.

My friend's home is nothing like that. It's warm and cheery and the meals are always great. But when I left the house to get to my car on Friday night, it was so pitch black I couldn't see. And as I trudged my way up a hill, I lost my footing, and smashed both head and nose against one of the many Hexenkopf rocks. Before I lost consciousness, I thought I heard a cackle and glanced at the black robes of a coven. Or were they judges? Or the Lehigh Valley Greens? Or Nazareth Borough Council? Or Northampton County Council?

Actually, I just tripped. Fortunately, my head broke my fall. Doctors thought my nose was broken until I told them it was actually that large before I fell. Now I'm going to have a nice Frankenstein scar, which I actually think is pretty cool. And I have an excuse for being ugly.

Tell the truth, Ohare, you botched using your do it yourself plastic surgery kit!

Chris, You told me I was so cute last week.

If Bonnie had gone after me, I'd be dead.

Hahaha, that's the best pic on the web! Hope you're alright dad.

Hey Buddy, As you know, I'll do anything for a little sympathy, but these bastards are laughing at me.

Spike, You think your watewr bills are high now? Wait 'till I get done talking to Mitman.

They're called Turkey "Vultures" not Turkey "Buzzards." Buzzards are hawks; Vultures are vultures.

I stand corrected. Thgese were vultures.