Why I Will Vote For Tony Bassil 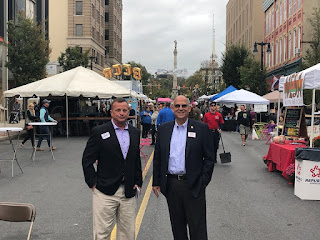 Democrat Tony Bassil and Republican Hayden Phillips are both running for NorCo Controller. I'll be voting for Tony. Let me explain why.

I got to know Hayden Phillips during his tenure on NorCo Council. He was hard-working and dedicated. Even more important, he was independent-minded. He was perfectly willing to take on Executive John Brown. So though he lacks the financial expertise that Bassil has, I'd be tempted to vote for him.

What has turned me off is his continued association with the GOP's DA candidate, Tom Carroll, who hates Democrats, is divisive and a racist. There are several photos of the two together on Carroll's Facebook page. Other GOP candidates have wisely treated Carroll like the pariah he is.

I will vote for the man who came to this country with pennies in his pocket and became a successful businessman.
Posted by Bernie O'Hare at 10/31/2019 12:00:00 AM

What has turned me off is his continued association with the GOP's DA candidate, Tom Carroll, who hates Democrats, is divisive and a racist.
Ok lets put this to rest. You want to be Political Correct. Then if you used any of the slurs shown below, you cannot vote in any election. In addition, you cannot run for any political office (local through federal).
THE LIST FOR ALL YOU RACISTS: WOP, GUINEA, DAGO, POLAK, KIKE, HONKY, MICK, SPOOK, COON, REDNECK, HOLY ROLLER, MACKEREL SNAPPER, RAGHEAD, HYMIE, CRACKER, HICK (MOST FROM THE LAST 60 YEARS) AND THE NEWEST SLUR FREDO.
Show some proof regarding divisive and racist. I would have asked the same had you attacked a Democrat.

Both are Republicans. One has the courage to call himself one. Tony was a lifelong R and had to switch to get a job in Easton.

"Show some proof regarding divisive and racist. I would have asked the same had you attacked a Democrat."

His taunts of a black female DA with a gorilla doll are proof of his racism, as well as his use of gorilla ties to continue to taunt her after being forced to resign. His divisiveness is demonstrated by his conduct at GOP meetings, which I chronicled here for several years.

Oh Mickey what a pity you don't understand!

How about following the law by using a disclaimer and phone number for your robocalls Tony?

You gave several really great reasons why to vote for Hayden Phillips. Because he has his picture with someone is no reason why to not vote for him. If that was the reason why you wouldn't vote for someone, 99% of the candidates would never get a vote.

Well Berine things that happened years and years ago still count. You must also believe once a criminal always a criminal. No one gets a second chance. Once an alcholic always an alcholic? No criminal reform for you.

"You gave several really great reasons why to vote for Hayden Phillips. Because he has his picture with someone is no reason why to not vote for him. If that was the reason why you wouldn't vote for someone, 99% of the candidates would never get a vote."

Those are great reasons, but it is not just one picture. They are together repeatedly.

So when you posted nice things about Hayden for a decade you were lying? The charges you hurl are not new. Now, you're calling the guy a vicious racists, essentially. Wow. That's some nasty shit toward a guy who's done nothing but serve honorably all his life .... per you for the last 10 years!

Thanks for the info Bernie.
It was a toss-up between the two, but I was leaning toward Phillips. I like Hayden and thought he was good councilman, giving him my vote in his losing bid for re-election.
However, if he is associated with Carrol because of party loyalty, or worse, he can condone Carrol's racist behavior by appearing with him, that is unacceptable.
My vote will go to Bassil.

Tony Bassil is very experienced. Great choice for the citizens of Northampton County. Not sure why his opponent is even running,Tony has decades of experience for the position

I’ve read the flyers and it seems that Tony has the edge in financial experience. But is this enough to make the difference?

Steve Barron had little or no experience coming into the job, learning while in office, yet he served successfully for a number of years. And Hayden is certainly not devoid already of enough financial experience to do the job successfully.

Steve was also a counter force to the administration while Tony is sympathetic to the executive and majority on the council. Will he be able to call them out when they overstep? Hayden will.

The controller is a manager, not the financial expert who does the work. Here Hayden has the experience from his military and financial careers. And from his time on county council.

Finally, guilt by association is a very poor reason on which to place your vote.

While there are many good reasons to vote for Tony, I believe that the county is better served by Hayden Phillips.

Hayden doesn’t have a financial expertise he was a project manager.
The controller is not a manager
His or her mission is to audit county departments and entities
He or she make financial recommendations to county management
Tony’s financials records with the City of Easton are no comparaison with Hayden’s records on 1 term with council plus increasing taxes.
Hayden is not qualified for the job we need Tony !!!!!

Bassil is the only canidate with the qualifications. My vote goes to Bassil

Issue here is Tony Bassil will not have to go though a Barron learning curve . I’m a hard R ,I know both men ,Tony and me go back almost 30 years , and LtCol. Phillips a few but not personally. Both good men .We are fortunate to have this talent willing to serve us. So- I’m going with the experience and time in profession. The LtCol.is a fine man ,he was a great council person and we would do well here to have him back ,But in some other capacity. He could ,and might streamline Gracedale for example. He could and would fix issues at prison . He may someday make a great Sheriff.

Pete's voting for a party flipper over a veteran who has served and acted honorably. I disagree with Pete. Vote for political courage. Vote for honorable behavior. Vote Phillips.

Tony has my vote because he is a man of integrity

To many cheap attacks by hayden showing hayden doesnt deserve our vote.

Cheap attacks by Hayden? The only robocall or mailers I have gotten in this race (although i got 7 from houck plus five mailers) were from Bassil with lies and stuff had no stuff for this job. I want someone who looks at facts & not just there to support anything the admnistation does.

Phillip's lack of understanding over the county's budget in the past is troubeling.

My vote goes to Bassil he has the experience and understanding

No brainer, easy to decideWon't for anyone associated with that racist Carroll.
Voting Bassil all the way

All of Tony's proven records are available at Easton's City Hall to the tax payer.

Hayden called for a tax hike in November 2014

Fact no1,When Bob Willever moved to a half double in Bethlehem,the resigned from Easton Controller, The Command and Staff or city hall folks asked Tony to ride out that post so the city could conduct business ,he accepted. Fact no2 ,He liked doing that part time job Evan though he had serveral other pressing responsibilities. He like the relationships with the city hall folks so he had to run for office at end of term if want to continue . Fact3 ,Almost ,at no time in recent years can anybody get elected to anything in Easton running on the Republican Party line. (See my prediction of 13% turn out in Easton in 6 days ) - Changing Parties , or your mind ,well things change like the brand of car we drive or the dealer of that brand. Changing parties is not a sex change. Fact4 Tony has a track record of acceptance and accountability. He hasn’t changed his wonderful wife . He evan owns the same cars he bought from the same Republican dealer for years ,I mean his cars are old. I personally admire Lt.Col. Phillips he did a great job here for a couple of years and got voted out ( my opinion)by people who do not understand what his integrity means on a directing board. ANon 9:54x I sign my name you can not.

God or Alla ,please give me a better candidate than Trump at this point ,,and I’ll vote for him or her. Otherwise I’m in . Forget the small stuff , the tweets. Got somebody better ,tell me how that person will correct the damage Obama’s administration has done to this country..