"Marsy's Law" On Ballot in November 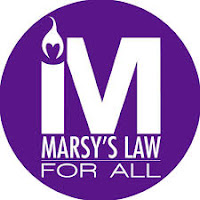 When you vote in November, you'll be asked to approve an amendment to the state constitution, called Marsy's Law, to give crime victims many of the same rights that apply to criminal defendants. They will have the right to be present at every proceeding. This has passed both houses of the General Assembly in two consecutive sessions, and it's now up to voters.

These will include constitutional rights to:

* be treated with fairness and respect for the victim's safety, dignity, and privacy;
* proceedings free from unreasonable delay and a prompt and final conclusion of the case;
* have the safety of the victim and victim's family considered when setting the bail amount and release conditions for the accused;
* reasonable and timely notice of public proceedings involving the criminal conduct;
* be present at public proceedings involving the criminal conduct;
* be heard at proceedings where a right of the victim is implicated, including release, sentencing, and parole proceedings;
* receive notice of any pretrial disposition of the case, with the exception of grand jury proceedings;
* provide information to be considered before the parole of the offender;
* reasonable protection from the accused and those acting on the behalf of the accused;
* reasonable notice of the release or escape of the accused;
* refuse an interview, deposition or other discovery request made by the accused;
* full and timely restitution from the person or entity convicted;
* the prompt return of property when no longer needed as evidence; and
* confer with the government's attorney.

Twelve other states have adopted this constitutional change.

Who could possibly be opposed to crime victims? This is opposed by both the ACLU and conservative publications like Real Clear Policy.

If someone accuses me of rape or an assault, the whole purpose of a criminal trial is to determine whether the accuser is actually a crime victim. As noted in Real Clear Policy,


"While considerate treatment of victims is important, and it can make sense to take steps to assure them (e.g.) better notice of proceedings and return of their lost property, it is dangerous to let the conduct and timing of criminal process itself depend too much on their wishes. Interests of evenhanded justice counsel against letting patterns of conviction and punishment depend too much on whether the complainant in any particular case is angry, energetic, articulate, or for that matter present at all. The function of criminal prosecution cannot be to validate the victim’s suffering. It must instead be to ascertain the truth as best as possible and impartially carry out the legal consequences on the guilty.

"In short, there are very good reasons why the Framers included in the Constitution and Bill of Rights many protections for criminal defendants, but relatively few for victims. We forget that wisdom at our peril."

"* refuse an interview, deposition or other discovery request made by the accused;"
Due Process??????
This may be my hold out. Having experience in criminal matters I am well aware of "victims", who may not be as truthful as they should be.

accused should be judged objectively by the law and the facts. we must not go down the road of judging on emotions. The victims should be informed about decisions made.

Another great erosion of "innocent until proven guilty". This foundational concept to our legal system seems to get discarded more and more every day. There is no criminal until after the accused have been convicted by self admission or trial. This is a feel good bill and not one based on the presumption of innocence. Sad times my friends...

"...we must not go down the road of judging on emotions."

That road is already well-traveled.

I know the attorneys job is to prove his clients innocence but at what costs. Even when an attorney knows his client is guilty, he goes to extremes, even further destroying the lives of the victims if necessary to get an acquittal for his client. After all, that is why he is getting paid. Where do we as voters draw the line? I don't think an attorney should have the right to get a deposition from the person filing the complaint. They gets their chance at the accused in the courtroom through cross examination. Harassing the accused is a ploy of the criminal defense attorney and should be limited. This is indeed a mixed bag of bones. There has to be some middle ground.

8.06, the extortion of settlements from drug co. who manufacture pain killers, is a good example. every prescription has the disclaimer listing all the possible side effects. Most never read them. No one wants to experience pain, and there are no pain killers that are not possibly addicting. For some time addiction may be necessary to cope with pain, then one has to such it up and get off the drug. Soon people who need pain medication will not be able to get it.

"I know the attorneys job is to prove his clients innocence but at what costs."

You obviously don't know the attorney's job. He has no obligation to prove a damn thing. It is up to the Commonwealth to prove guilt, and beyond a reasonable doubt.

Ye, Bernie that's how it used to be.

We live in dangerous times with erosion of some of the wisdom of our founding fathers.

The system is designed to benefit lawyers by delivering product (i.e. bad guys found guilty of any number of thousands of laws passed by ... you got it .... lawyers.) Victims gum up the works and only matter to lawyers on the civil side. These are facts. If your victimhood won't pay a lawyer, you ain't much of a victim.