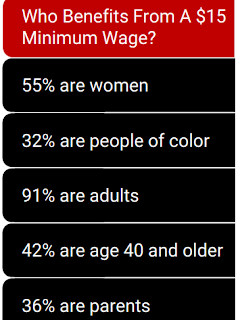 Not long ago, I told you 17 of Northampton County's custodial workers are paid less than $15/Hr. I have since learned, in response to a Right-to-Know request, that 232 full-time county workers are paid under $15/hr. Another 163 part-time or seasonal employees are also paid less than the US House has determined American workers are worth. This is roughly 18% of the County's workforce. While Northampton County construction contracts require prevailing wage to be paid, and Council members moan about the need for a living wage, they appear to have no regard for their own workforce.

The list, which you can review for yourself below, covers numerous important jobs. These include over 50 certified nurse's aides at Gracedale, social workers and numerous clerks in the row offices. The County justifies these save wages because it pays $9.62 per hour for benefits for every full-time worker. That's unfair, too. This is because the county pays this same amount for everyone. Employees who earn far more money and who could and should pay more for benefits get the same hourly rate as someone receiving a pittance. In effect, the lower paid employees subsidize the benefits paid for cabinet officials.

In Columbus, Ohio, Mayor Andrew Ginther announced this week that his entire workforce is now being paid at least $15/hr. He said Columbus should "lead by example." City Council President Elizabeth Brown adds, "Leveling the playing field for families in Columbus starts with living wages, and one of our goals as an employer must be to set a standard for wages and benefits that help families thrive. I’m proud to see the city beat its commitment to bringing all full-time workers to $15-per-hour by 2020."

Closer to home, both Pittsburgh and Allegheny County are on track to pay their workforce at least $15/hr by the beginning of next year. But Northampton County Council, despite having two trade union agents as members, seems to be more interested in plastic straw bans.

Did McClure put it in his budget? You love the guy so you will blame everyone but him. If he is such a great guy, he should have put it in his budget and recommend it to the council people. If not, shame on him. H made sure he gave all his political flunky hires fat salaries.

Your buddy Lamont ranks up there with one of the worst County Executive's in NC history. You notice is office staff is not under $15, especially for the warm greeting (NOT) when you enter that office. Also, you notice County Council office isn't there neither.

Neither are their names from HR.

Not fair to union council members, most of these positions are covered by union contracts, why not point that out and single out the union reps that are responsible. Can’t do much about contractual relationships they need to be bargained

This is absurd. Please explain why $15 is even close to enough. Why $15 Bernie? Did you lift that number from a trending hashtag? Seriously, why only $15?

Nor the Solicitor's office

With the influx of migrants and refugees who would gladly accept these wages and benefits as they join our melting pot, this post drips of native privilege. Red-lining newly arrived souls to maintain a structured underclass is immoral and not who we are.

None of this is difficult. Let Lamont propose the increases and let the D majority council approve it - with the required tax increase and/or budget cuts to pay for it. They won't because they'll be pummeled on election day. And shouldn't Lamont have considered paying a living wage to his employees before overspending on a Taj Mahal forensics center (the finest in the state and overbid by 20% on labor to pay off union donors)? We apparently have tons of extra cash. What gives?

If they don't like what the government pays them, can't they get a higher-paying job in the private sector ?

"This is absurd. Please explain why $15 is even close to enough. Why $15 Bernie? Did you lift that number from a trending hashtag? Seriously, why only $15?"

I did not pick it. You know this. This is 50% above a living wage for a single adult. It is the figure used by the US House and most people who advocate a higher minimum wage, and they contemplate tying it t the COLA.

I am critical of both McClure AND Council on this point. You can't claim to have high regard for the county worker when so many of them are getting under $15/hr. I find it incredible that the two union agents who sit on Council have such poor regard for the people who actually work here and how they are paid. They were all for padding Council staff with a "deputy" who is not needed to assist a $100k per year Clerk, but screwed probation officers over a two per cent payhike simply bc they were nonunion. They need to wake up. And yes, no union agent should accept a contract that lets the county pay under $15/hr. It is in my opinion an outrageous abuse of the employee. If you collect union dues from them, advocate for them.

The county wonders why it can't hire CNAs. It wonders why corrections officers leave. I think the answer is obvious.

It is time to stop balancing budgets on the backs of county workers.

The Exec cannot just start paying union people more. But this should be part of the bargaining, and if a union agent does not bring it up during negotiation, the county should.

Here's some facts you can hang your hat on.....
A real job analysis (valley wide comparison) hasn't been done for almost thirty years.
The wage scales for No. Co. employees never allows them to get to the top of their class.
There are 11 different unions representing county employees.
If unions are so great, why the huge discrepancies in wage scales?
If these unions are so great, why is it the union workers seem to be the ones hurting?
Benefit packages must be considered. Wages, medical, dental, eye glass, vacation, bonus' holidays, longevity pay, etc etc are all monies the employee receives.
During the John Stoffa years, the unions paid close to 4 1/2 % of their pay for medical benefits (regardless if you made $10.00 per hour or $25.00 per hour) Even the employees that weren't union had to pay that percentage). Add on to that all the co-pays and plus the 5 % they pay into their pension benefits. Ten percent of their base salary goes to medical and pension benefits (not including all the co-pays)
There is no easy fix for this issue, but you can start by hiring an outside firm to come up with fair and equitable wage scales based on what the averages are being paid in the Lehigh Valley. Don't forget, many of these jobs are mandated by the State and the State reimburses the County up to 80% for most of these positions.
You need an outsider to come up with a pay plan based on a number of issues other than what I have stated. Hire someone with that expertise and then make the results public. John Stoffa did the survey and then never implemented the plan because he said it was too expensive.

Please. That does not put food on the table.

"John Stoffa did the survey and then never implemented the plan because he said it was too expensive."

He did a pay study and never implemented it bc there were too many complaints from the workers, especially those who were redlined. It was criticized as a bad study. But no matter who does it, it is going to be controversial and will lead to numerous appeals.

A real shame we couldn't take some of the money Ol Vic Scomillio cost the county and spread it around to the hardworking county workers.

Does anyone know the math?

Are an inordinate number of these positions not being filled at the current compensation? If so, raise the pay. If not, maintain it. Nobody is an indentured servant for the county. The unemployment rate indicates lots of opportunities out here. People leave jobs for their betterment, all the time. Ask any hiring manage how difficult it is to get good people in this humming economy.

There are an inordinate number of unfilled CNAs.

You get what you pay for in a real job market! 10 year contract $ 330,000,000 bucks for an outfielder. He’s not banging on the door or working the poles Election Day to be a partronage job at any county. They are not held there ,look in the real market When people start going elsewhere they will look at this issue then. Otherwise If nobody gets another job it appears they are fine .

$9.62 an hour in benefits for each county employee. O.K. you solved the riddle. Give every employee $9.62 and hour, take away all their health benefits, eye care, dental, vacations and pensions and give them the $9.62 and hour and let them buy their own benefits. Great idea Bernie. You should be the Executive.

1.5 million that is salary@$ 15.00 .A lot of those are salaries are only cents per hour below this goal line . It’s not much more . 14.456 per hour for somebody’s line budget . A “study” would eat up costs that could go toward some pay grades easily. I don’t think our country taxes are runaway like the EASD.

Some employee sand retirees are getting screwed over. That is sad.

Everyone is brainwashed into believing a $15/hr minimum wage is a panacea for all walks of life. As wages go up, the cost of goods rises as well. Plus, what do we pay people who now make that wage while providing services that are far advanced from a burger flipper?

Government employees make more money than private industry & even more so when you look at the incredible benefits the County employees receive.

Government has the right to tax that private industry dowsn’t have. Government workers are already grossly overpaid & don’t face the competitive marketplace. Who said $15 is required in Lehigh Valley? $15 in NYC is different than in Lehigh Valley & one wage doesn’t fit all.