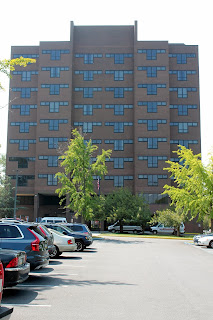 I must admit I had a tough time believing this. One reason Gracedale has always stood out is because many of its employees really care about the residents. They take them shopping. They sometimes bring them home for holidays. After these workers retire, they often come back as volunteers. Though the pay is low and turnover is a problem, there is a core of workers who really care. Having said that, there are also some nurses who have disgraced both themselves and Northampton County who have made a mockery of the Nightingale Pledge. Let me tell you the story.

One of the biggest problems at any nursing home is bed sores. Bed-ridden residents tend to develop them, and they require attention. One resident, whom I understand is a difficult person to begin with, has this problem. On August 10, he was treated with a pressure dressing, which is common.

What is uncommon, and frankly inexcusable, is that this resident's dressing went unchanged until September 7, nearly a month later. During this time, as many as 14 nurses falsely claimed to have changed it.

This possible criminal negligence was caught by Gracedale's Risk Manager. The dressing had to be double-bagged because it stunk so horribly.

The resident was immediately placed on antibiotics. Fortunately, he needed no additional medical treatment.

When I first heard this story, I declined to write about it because it seemed so contrary to everything I know abut Gracedale. So I contacted county officials, who looked into the matter.

Once made aware of the situation, county officials undertook a thorough investigation.

The first question is why this matter was never reported to the Department of Health. The Risk Manager, who discovered this matter, said there was no need to contact state officials because the resident required no hospitalization. I understand that Executive Lamont McClure, unhappy with this answer, reported it anyway. He was willing to see Gracedale's ratings drop rather than be dishonest. He learned that the Risk Manager was correct. The state Department of Health declined an investigation because there was no need to hospitalize the resident.

The second question is how the County responded to this gross dereliction of duty. This is what I've learned:

* Six of the nurses who falsely claimed to have changed the pressure dressing were "agency" nurses, not Gracedale employees. They are brought in from the outside to make up for manpower shortages. They have been banned from Gracedale.

* Two Gracedale nurses who falsely claimed to have changed pressure dressings resigned after being told they would be terminated.

* One Gracedale nurse of lesser culpability was suspended without pay for five days, and others have received reprimands.


The rebound to the census at Gracedale, as well as the improved quality ratings, demonstrate that the majority of the staff do their work with consummate professionalism. However, from time to time, there are some instances where individuals do not always fully complete the job they are supposed to do. That is unacceptable.

I agree, and believe this should also be referred to the state licensure board and District Attorney's office.
Posted by Bernie O'Hare at 10/29/2019 12:00:00 AM

McClure claims to be the savior of Gracedale who single-handedly saved the place. Now this happens. Things go from bad to worse.

Glad the nurses were disciplined/fired. They should be charged. Who were the supervisors who failed to notice the stinking bandage during the course of their routine oversight duties? This went on for a long time. Where's the rest of this story?

"Six of the nurses who falsely claimed to have changed the pressure dressing were "agency" nurses, not Gracedale employees. They are brought in from the outside to make up for manpower shortages. They have been banned from Gracedale."

Were the six nurses banned or the particular agency from which they came, or did they all come from one agency?

All from the same agency.

6:37, I believe two of the nurse supervisors are the ones who resigned.

When was the last time you visited Gracedale? Were you able to tell the professional nursing staff from the cleaning people? I couldn't. Black sneakers, low cut outfits (tops) tight fitting long pants are not appropriate nursing wear at any other facility. Professionalism starts with appearance. Professional dress code sends a message. If you dress sloppy your work will probably be the same. Why does the County Executive come to work dressed in coat and tie. If he set the example of coming to work in cutoff dungarees, sandals, and a tee shirt how long would it be until the rest of the work force followed the example. Make your professional people look like professional people. It starts at the top. Until then, expect the same sloppy uncaring results.

Place is too large , should reduce overall census to 400 beds.

What is the dress code for Gracedale? "Black sneakers, low cut outfits (tops) tight fitting long pants are not appropriate nursing wear at any other facility. Professionalism starts with appearance. Professional dress code sends a message. If you dress sloppy your work will probably be the same." That says it all. This debacle needs to be sold and run by a private company. It has been proven that all the nursing centers take those that the family have scammed all the patients money long before they are ready for Gracedale. I know of one family that are holding breath so the time passes and they wont have to declare the assets. What human falsifies the records and leaves an elderly patient with these sores? That tells it all about the place. Bernie you keep reporting this type truth and you will have to come in the custodial entrance to the courthouse. You will not be the poster boy of the news media for McClure.

Somebody better look into what is happening in that place. Supervisors quitting, Nurses quitting, lack of staff constantly, A D.O.N. who doesn't no what floor she is on or how to get off the floor she just visited, changing POLICIES daily and just the lack of leadership. This is a disaster waiting to happen. What does the administration do? Nothing as usual.
So glad they are putting the forensic center close by, because when GRACEDALE dies, it doesn't have far to go.
WAKE UP COUNTY and start listening to the people and nurses who actual care.

It is nurses, not county administrators, who neglected a resident for a month and lied on reports. Perhaps you should wake up bc this is on you.

I do believe that you got it backwards, it was actually 6 Gracedale nurses and 2 agency nurses that were held accountable for this.

I got it right, 6 agency nurses and 8 Gracedale nurses are all, to a greater or lesser degree, culpable. And you hypocritically slam administrators. Look to your own fellow employees, perhaps even you. I notice you failed to utter a word of regret or sympathy for the resident you ignored. You should all be ashamed of yourselves for your despicable conduct. You have given the home a black eye.


Adm. decisions led to this very unfortunate situation. That is not blame redirection but ya got to follow the money Bernie. When you make budget cuts and install people who do not know how institutional health care systems work..this is the result of those poor monetary decisions. Easy to lay blame and those responsible in this case bear that burden alone. You got to rise above the bs and do your job or get out.

Again, not one word of regret.

Gov't needs to get out of the Nursing Home Business. Just like it did with the Mental Health Hospitals. Not fair for to the tax payers paying for this and law suits forthcoming if true.

This is the kind of public reaction Gracedale nurses can expect after this negligence. Start looking to your own house.

After visiting my mother, I saw that the day shift had 4 aides on her floor, 1 nurse on each side of her unit giving out medications, and no nurse or secretary at the desk. I asked the staff where the nurse in charge was. I was informed that there isn't one. And there isn't a clerk today to answer the phone (which sounded like it rang continuously). I overheard the staff saying that the nursing supervisors are calling mandating aides and nurses for the next shift. They all sounded very stressed, overworked, and generally looked worn down. So if they already worked short staffed all day, are being forced to stay another 4-8 hours, how is this ethical? How can you work someone like a mule? How can they be expected to get their jobs done effectively, efficiently, and accurately if they aren't provided the proper means/ staffing to accomplish this?
I remember years ago when I came to Gracedale to visit my aunt, the tower building floor had 5 aides, 2 orderlies, a nurse on each side giving medications, a nurse in charge at the desk (the same nurse that was there every time I visited), and a secretary answering the phone.
What has happened to this place? I really like the staff on my mom's unit, but I think I may need to place her elsewhere. Gracedale went from 11 staff members on a tower floor to only 6.
No wonder things are getting missed! They are providing care to our elderly with tons of visible medical issues but with half of the staffing.
The County better do something to get long time employees from quitting and getting caring, responsible staff to work there!! I hear the pay is horrible compared to other places. Remember, you get what you pay for! If you pay a crappy wage, you get a crappy staff.
Think about it!

Or if you pilfered the bank account and can afford a better place for mom mom go right ahead and move her. Your right you get what you paid for now check the interest on that account as you complain about the free taxpayer paid for health care.

Actually, my siblings and I share the expense of covering mom's health insurance which has very good coverage. We also cover all other deductibles and expenses for her. We chose Gracedale because of its location and our previous familiarity with it. We are actually considering private duty care for her 24 hours a day/ 7 days a week-- because WE can afford that.

So your whole $1,000 county tax contribution (i'm being generous in that amount) isn't worth anything to us. But i'm sure one day your parent will be in here because where else does someone go who has medical assistance?

Write again when you are sober or literate.

Before or after the children get to the parents bank accounts. That is the determining factor

This is sad but true. The way these nursing homes neglect patients. When I used to work in a nursing home I didn’t last. Because they were understaffed and could not care for the residents like they need. I quit because I could not stand the way they neglect them. I then did private duty.

So much for the Medical Profession, patient needs a lawyer now, lets see how the Legal Profession works; will they sign off?

In order to sue, there ordinarily needs to be damages. In this case, there is negligence, but fortunately, no damages.

"In this case, there is negligence, but fortunately, no damages."

In that case, Gracedale should be given the opportunity to present that defense in court.

If this is anything at all it's medical malpractice, however it may be more, procedures were signed off on, entities may have been billed, there maybe some billing fraud going on for all we know.