Code Enforcers: How Would You Make Them Accountable? 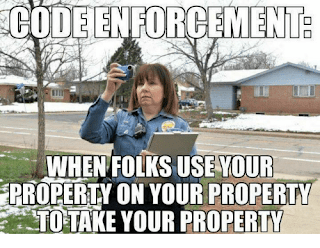 When he was Allentown's Mayor, Edwin "Fed Ed" Pawlowski was more than willing to use his code enforcement officers as a gestapo to punish political enemies. He did it to a building owner who dared sport a digital billboard that featured an ad from Lou Hershman. Then Pawlowski came out with his own digital billboards. He sicced these goons on a 75 year-old woman who conducted occasional yard sales for pin money. He also used code to help pals, including a hedge funds manager who needed the city's blessing for some in ground pool he wanted at his mansion. Managing Director Francis Dougherty fired off an email to one of his underlings, demanding quick action. "This is a favor for tim holt. Our action on tim's behalf means money from air products later." And when he himself wanted to build a mancave, he did so without bothering to get a permit until his transgression was pointed out by a bottom-feeding blogger. Fed Ed is currently teaching government classes to fellow inmates, but Allentown's code officers are as arbitrary as ever. Ask Kim Oliver.

Oliver made the mistake of complaining about a next door neighbor whose leaking chimney was causing problems for her. After doing so, she herself was cited over a supposedly defective porch. She called blogger Michael Molovinsky, who soon learned that she reported the wrong homeowner. You see, this homeowner, who also has some kind of business across the street, is pals with a code supervisor. The two sit there on lawn chairs when the weather is nice, watching the cars go by.

Molovinsky visited code officers, and after doing so, they came back and photographed Oliver's porch. They did so from inside the home of the supervisor's pal.

At a hearing on this supposed violation, Magisterial District Judge Michael D'Amore had no problem finding Oliver guilty. In fact, he allowed code to argue a violation for which she had never been cited, claiming she never had obtained a permit. The City had no records.

Guess what? She did. While D'Amore railed at Molovinsky for daring to speak up for Oliver, Oliver looked through her records and found the permit the City claimed she never had.

D'Amore was forced to reverse himself and find Oliver not guilty.

But now that she's on code's naughty list, they'll be back.

I believe it is entirely improper for city officials to interfere with code. But I have heard numerous horror stories throughout the Lehigh Valley. In one city, a code officer was dinging a property owner at one visit, and then asked her to sell him the property. It turns out that he has quite the portfolio.

My question is what recommendations would you make in holding code officers accountable?
Posted by Bernie O'Hare at 10/21/2019 05:28:00 AM

As usual, the urge for power usually corrupts. Some Individuals of authority love to control others to satisfy their egos. In the example you describe, perhaps a volunteer, non-partisan, 5 person board of neighborhood resident owners could have oversight over the actions of bureaucratic thugs who step out of bounds.

The nation of Demos takes the questions of how high the next level of help goes when Vericcios position was replaced by hi m as head tiket taker. Now she is and has been using her position and connections the same as code!

First, thanks to you and Mike Molovinsky for keeping our attention on this issue. It's disgusting that neither Ray O'Connell nor Leonard Lightner give enough of a crap about city residents to actually do their jobs and provide oversight.

As to the question - my recommendation is that we consider a separate court, the Court of Common Pleas, to hear these matters. Mike D'Amore should have recused himself given his history with the city, and too many other district magistrates have the same conflict. These cases should not be heard in that part of our court system.

The cases could continue to be handled as they would be at the Magisterial level, quick and without political influence. I would have paid $$ to watch and of the CCP Judges rip the city for this action.

I recognize the risk is that an already burdened court has to take on more responsibility. But protecting the people is too important to continue the path we're on.

Yet no one believed me when Bob Sandt was a housing inspector and overlooked code violations at a property I rented from Joe Clark and the fact that Bob Sandt was very unprofessional when he came to the property, didn't introduce himself as a city inspector and didn't have his city ID visible till I questioned who he was. Then when we had an electrical fire due to Joe's neglect, Bob Sandt said we could stay in the property when we had no electricity cause PPL pulled the meter till the city could investigate. When I questioned Bob Sandt on how we could stay there with no electricity, no heat, and no hot water, his exact words were, "you have flashlights, don't you". There was something obviously fishy about the whole situation. Then when the director of building standards and safety came to the property because we were complaining, the director dismissed everything and even gave me attitude. When I questioned that Bob Sandt missed violations that were obvious, I was told maybe it wasn't that bad when he was there. However the violations were safety violations that anyone could see. We had to call the fire department again cause the oil furnace chimney shoot was corroded through and was producing Carbon monoxide. The oil tank had a crack and was leaking. Electrical wires were exposed. This was all stuff anyone that wasn't blind could see.

Most code guru's are want to be cops... Maybe Mazacrazies next career?

I thought Joe Clark was 'The Prince Of Allentown '

A few years ago I was painting the interior vestibule of a center city Allentown rental property I owned when a male code officer walked through the open front door without invitation and began looking around, almost immediately stating the property lacked a rear exit. I pointed out that it was a 2-unit building and didn't need a first-floor rear exit. I got the feeling he was trying to get something from me and only backed off when I told him I knew the law.
SWEEP is another insane agency. I've been cited for my rental properties over a handful of weeds two-feet high sprouting from next to a curbside tree; over a kitchen chair a tenant placed on the front porch, and once spent time defending against a complaint over a supposedly abandoned vehicle in a back yard when in fact the yard had no access and never had a vehicle there. Turns out the SWEEP people filed the complaint without ever looking at the back yard.

I think code officers should be changed out every 4 years, or sync it up to an election year, we need fresh blood with some sort of background in building standards, this way the old crusty dudes can't get comfortable in their position of greed

I agree with you on that. The fact that I had went in front of City Council about a complaint with the same neighbor when D’Amore was president. He didn’t do anything about the issue. He didn’t like the fact that I asked him if it was because that was his buddy. When I call the police when being harassed They referred me to the Magistrate. To file harassment charges. Guess what?? My claim is denied!! With all the police reports I have, pictures I’m denied. What else does a person need to get in front of the judge. Officers question why they are giving me a hard time. Well can we say they are all connected??

I would recommend clean the city out of the remaining Pawlowski debris. Then suggest changing the areas of these code officers every 6 months. I would not recommend voting on these
Areas. As long as the supervisors remain the same the inspectors follow their orders. So rid the supervisors and heads of depts would be a great start. Then follow through with the inspectors.

Didn't the former King Palumpa and the former 1st Lady have work done on their former 1st Castle without any permits for a time being? It is good to be the King!

Now the new director of public works can move into that infamous house on 11th street. We all see the revenue stream of insurance fraud and property aqusition is still very active and alive in city hall. This could have been another Fulton street exercise with sites set on private property.

I just hate pecker checker spell checker, DehoAmoe, him head giving ticket taker followed up by the next level of hell going up Verriccio to protect and serve the intrests of there pockets intrests?
We had one say it's in the publics intrests not to sensationalize all the criminal activities that go unpublished in the local rags. This is for Allentowns sell sale sell off still infecting Allentowns public servants?