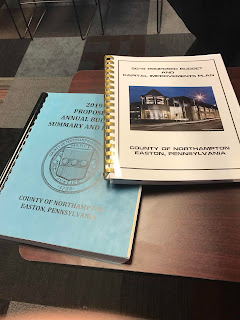 Northampton County Executive Lamont McClure will unveil his 2020 Budget for Northampton County on Thursday, 10 AM, at the 911 Center on Gracedale's campus. The current tax rate, set at 11.8 mills, has remained the same for the past five years.

Lehigh County, which released a $514.6 million budget earlier this month, has proposed a tax hike. It is unknown whether McClure will hold the line.

Under Northampton County's Home Rule Charter, it must be a balanced budget. Proposed expenditures must be no greater than the anticipated funds available.

Surprise!!!No taxes. Whoopee, we all knew that. Now his rubber stamp council just has to approve it.

You bet your fat ass there is going to be a tax increase...

There can't possibly be a tax increase. The county clearly has a few extra bucks to burn. Why else would McClure be paying for a Rolls Royce forensics center ("the finest in the state"), when most NorCo taxpayers get by with Fords and Hondas. Let's review, Lamont:

Nice to have = Rolls Royce
Need to have = Ford, Chevy, Honda, Toyota

Lamont isn't remotely acquainted with tight budgets and belt-tightening (no pun intended, seriously). He's spending like Lamont does; not like the rest of us must do.

With all the automatic adoptions of the budget, why bother with a county council. This is another reason Home Rule is useless. The Executive holds all the cards and the power, so why even bother with a council. The county should end this farce and go back to a commissioner form of government. Stop pretending this works. Everyone knows that in Northampton County, Executives do what they want and have all the influence and power.

The provisions in the HRC force Council to be responsible and enact a budget of their own if unhappy with what the Exec does. This is unlike the federal or state government. There is nothing wrong with these provisions.

The biggest question is will he award the career service employees with a step increase or will he screw them once again with only a COLA raise. Why have steps if there not being utilized? My hunch is a 1.5 COLA due to moneys being spent elsewhere like the Forensic center.

2:25, you got that right. The deal he made with the big union chief was all union people get the step and all non-union people just get the COLA. This was a behind the curtain deal he cut to show the union he was with them as opposed to non-union people. He even used that to go after the Probation workers who decertified. McClure, did the union boss a favor by making sure the probation people would suffer and only get half a year or 1% as opposed to all the other career service people. Fortunately some of the council saw through the game and changed it to the right way.

Problem is career service and retirees are low on McClure's list. There is no point trying to talk to county council as most of them are spoon fed information by McClure and his team and will only do what he wants them to do.

You are 100% right. Why have a pay scale that means nothing! Staff there 10 years and only moved one step! A joke

Remember this at the voting booth. Bet next year there will be a step. Don't forget the past few years! Vote them out and keep doing so till someone listens.