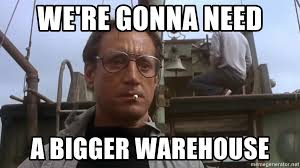 Critics like to call warehouses big boxes. Developers like to call them fulfillment centers. Whatever name you use, they have gobbled up much of the Lehigh Valley's open space while simultaneously increasing truck traffic on roads unable to handle the load. Bethlehem Township had to impose a tax hike last year to completely rebuild Brodhead Road, which truck traffic reduced to a washboard. Once Allen Tp's Fed Ex is in full swing, there will be more traffic snarls and ruined roads. Thanks to some strong advocacy, the Lehigh Valley Planning Commission (LVPC) is expected to intensify its review of warehouse plans once its latest comprehensive plan is adopted.

In his report to Northampton County Council last night, Executive Lamont McClure condemned the "warehouse proliferation" he sees in the Lehigh Valley. For that reason, he has fully funded open space with $3 million in his proposed budget for next year. But since most open space projects are nowhere near planned warehouses, that's a very limited solution.

Even more meaningful are two proposals made by Greg Zebrowski, who is the LVPC's Vice Chair. Automatic review of warehouse plans will be triggered if (1) they are more than a quarter mile from a major roadway or (2) are outside of designated development areas.

Email ThisBlogThis!Share to TwitterShare to FacebookShare to Pinterest
Labels: warehouses

Better plan is to allow them to have a direct access on and off the to major hy-ways from the warehouse parks. This would keep truck traffic off the side roads.

If the LVPC was worth the space it occupies, we wouldn't be in this mess. They plan real good. One year, they wanted high density housing in townships, the next year they're decrying the disappearance of open space and attempting to address problems that have been decades in the making. Yeah, they plan real good.

They have wrecked what was once the beautiful Lehugh Valley and have pushed life long residences out. SHAME ON YOU!!!

Direct access to highways would only be possible if they were immediately adjacent to highways and this would also have its own issues and cost. High impact fees would need to be adopted & implemented by the local municipalities. It’s mostly a local zoning problem, which is why most of the municipalities need to be in joint plans with their neighbors. This will limit where warehouses can go, rather than be miles from major highways, further impacting local infrastructure. A bunch of communities have been working on this with LVPC over the last couple years. As community members and local leaders we need to work together on the solution.

It’s a tough balance between freedom and regulation in this country and even those with legal authority are often limited in their reach due to state or federal laws. Let’s not forget that globalization / market demand, our shopping habits, our proximity to major markets and the interstate highway running through the lehigh valley to those markets are the main reasons this development has been placed in our laps.

I believe the LVPC is a entity that usually provides valuable reviews and advice. My issue is that I believe their reviews are largely advisory and the real decisions on these matters are made by the governmental jurisdictions that include the development parcels being reviewed. My question is whether this positive move to increase the scrutiny of warehouse developments by the LVPC includes a legal mechanism to mandate their decisions on any jurisdiction that does not agree to fully accept what the LVPC suggests?


Will a shipping company pay their truck drivers an hourly wage to sit idle on the streets due to overload of traffic? Time is money! Traffic congestion is extreme at this time. Our roadways will look like parking lots.

Truckers are paid by the mileage

The LVPC is a very worthwhile agency, but with exception of only a handful of municipalities, is advisory only.

Maybe if the personnel at LVPC trimmed back their bloated salaries RT 22 could be widened.

10-18 6:50pm: Genius statement... pay staff less and expect better results. If you ran a business it would fail. For business (or government for that matter) to function well and attract qualified personnel, salaries must be in line with the market.

If they don't like their salaries then let them leave. There is always someone else waiting to step in.

Someone as qualified to step in? not always, unless you’re talking about an entry level job, then maybe.

Their staff is underpaid by industry standards.