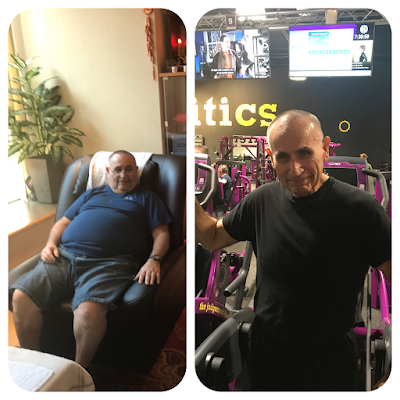 Northampton County has a Department of Weights and Measures. This story is about my weights and measures. I finally did it. I started in July 2018, and as of October 25, 2019, have reached my goal weight of 170 lbs. In the pic on the left, I weighed in at 295. I dropped 125 lbs over the course of 15 months. I posted about this once before, when I was at the halfway mark. I want to thank all the people who encouraged me along the way. You have been very supportive.

What got me started was a tiny Jackapoo (half Jack Russell and half toy poodle) named Suki. She's the Captain Danger of designer dogs. When she is at my grandson's house, she mostly acts like a toy poodle and even refuses to go out in the rain. When I have her, the Jack Russell comes out, and she is the Terror of Terriers. I have to walk her incessantly. I have had to give her several skunk baths over the years. In July of last year, I spent a few days dog sitting and she got me motivated again.

She was quite disgusted with me, which she would make clear as I struggled to keep up with her.

Gradually, I cut out the junk food and replaced it with more healthy choices. I also limited my caloric intake. I try to consume my calories for the day within an eight-hour window. With rare exceptions, I stop eating by 8 pm. Using an app called "MyFitnesPal," I have been able to keep track of exactly what I eat, and with a fairly accurate count.

I start the day with a capful Bragg's Apple Cider Vinegar, mixed with 16 ounces of water. I continue drinking water all day, trying to consume 80 ounces.

Initially, I was just walking, but at my weight, it was becoming very painful in my hips. So I used a machine called the Arc Trainer, which burns a shitload of calories in far less time and is very gentle on the joints. As time has gone by, I can walk again, and at a brisk pace. I'm uncertain whether I'll be able to return to running. I try to burn 500 calories a day. I try to get it in every day unless I am sore or sick.

I began lifting weights in September 2018, and that has been the biggest surprise. I spend one day doing upper body, one day doing legs and one day doing nothing. If I am sore, I will rest extra days. I am still unable to do a single unassisted pull-up or chin-up, but can bang out 43 push-ups.

This exercise has made me much stronger than when I was running 26.2 mile marathons in my younger years. Over last winter, I did a header on black ice, landing on the back of my head and ass. I was uninjured, but think I would have had broken bones had I not been exercising.

Have I relapsed? Yes, and as recently as Saturday. But these binge fests have become less common, and after Saturday, I was so sick I doubt I will ever binge again.

As things stand, I am still at the high end of what is considered normal, but will take it.

My worry is that I will return to my evil ways, as I have always done. I'm like a yo-yo when it comes to weight, and marvel at those of you who can maintain the same weight for decades. To me, maintaining is much harder than losing.

To those of you who still like to taunt me about my weight, keep it up. It motivates me.

Email ThisBlogThis!Share to TwitterShare to FacebookShare to Pinterest
Labels: weights and measures

It was you!! You look wonderful. Congratulations on your accomplishment. I was anticipating your post cappa day write up but this was great to see.

The MyFitnessPal app is great. It also will tie in with an Apple Watch that you should be wearing to monitor your black heart 24 hours a day

Good for you --- am also struggling to loose 30 #. I've begun working with a nutritionist. Lost 10 # in 3 weeks. I also am starting the day with the unfiltered cider vinegar but also adding some lemon juice and a pinch of cinnamon, cayenne pepper and turmeric. Congratulations!

I traveled your path 17 years ago when a brutally honest doctor asked me why I was committing slow motion suicide. I get to binge if I want, but it's self-policing, as you learned. I also know I can make a holiday 5 evaporate in short order. My winkles appeared, once my bloat deflated. I'm still ugly, too. But it's empowering to say "no" to things and be more spry than fatties who are 30 years younger. Congratulations. Well done.

You are a big loser!

I couldn't be more proud of you my friend!

Good for you now if you only see how dems are trying to change this country big time and with their policies not for the good.

Congrats Bernie. I wish I could do the same.

@7:31: And what about the escalating national debt you so-called republican conservatives are growing & ignoring?

Sincere congratulations to you Bernie!!!

A huge congratulations to you Bernie! I know how much of a challenge people go through with weight loss. Yo-yo is better then nothing. It’s wonderful how your pooch helped you. Sometimes just a little pet can help tremendously. Stay motivated and keep moving forward.

Great Job Bernie!!! It is not easy to loose that amount of weight

Way to go, Bernie. Having had to go that route myself several times, I know how much dedication and optimism it takes. Relapses for a little while are OK: we are just human. You look great (given what you started with ��) I hope you inspire others to cut out the junk food -- hard, I know -- exercise and not give in to our natural urge to vegetate. Bravo! - Don

Heard your blaming Trump and the republican party for your weight loss or was it your lips kissing McClure's butt so much you forgot to eat?

So very happy for you Bernie! And very happy with your weight loss journey! It’s an absolute life long journey! I wish you much success in this journey! You may have given me the motivation I need!

Lol, you're fine just the way you are.

Well-told account of your well-done accomplishment; inspiring and upbeat. Congratulations!

Congratulations ! You look great and will live another 20 years.

Congrats Bernie! Up here in Bangor we better hide our women you cat! No matter what time of the year they are SumR women... vote republican and sum of the teeth are missin here sumr missin there-

Ooooo la la! In all seriousness, CONGRATULATIONS on a job well done. I'm impressed and can only hope to find the motivation and determination to do the same.

"I've seen a rich man beg I've seen a good man sin
I've seen a tough man cry
I've seen a loser win and a sad man grin
I heard an honest man lie
I've seen the good side of bad and the downside of up
And everything between
I licked the silver spoon drank from the golden cup
And smoked the finest green
I stroked the fattest dimes at least a couple of times
Before I broke their heart
You know where it ends, yo, it usually depends on where you start" - Everlast

Health Tip: DO NOT wash your hair while showering!!! It is so good to finally get a health warning that is useful. It involves the use of your hair shampoo while showering and what occurs when it runs down your body.

I don't know why I didn't figure this out sooner. When I wash my hair while showering; the shampoo runs down my entire body. Printed very clearly on the shampoo label is a warning that reads: "For extra body and volume."

I've gotten rid of that shampoo and now use Dawn dish washing soap. It's label reads: "Dissolves fat that is otherwise hard to remove." Problem solved!!

Congrats, Bernie. Your story reinforces that:
1. There's no easy way to lose weight.
2. Persistence and dedication are more potent than fad diets.
3. What gets measured gets managed.
4. Sharing your struggles and successes with others keeps you accountable to more than yourself.
5. It doesn't matter how you do it or how fast -- just keep moving. Our bodies have evolved to move, not sit still.

Thanks for sharing. Best of luck for continued health.

Looking around to the right and left seems to be the gluttonous side as a whole needs your tecniq, Bernie? This thing that makes a person fluctuate through out life is usually from some deep childhood phycological Truma suffered. Most its choose not to address any issues they suffer from and always are pointing the finger at others?
Glad GOD made me in his OWN image!

You look better Bernie , weight loss is related to Surgeon Generals height to weight ,male or female and age chart as I posted to you earlier. I weigh myself at least 4 times a week on a medical grade scale after workout at YMCA. At 67 ,no pills ,I’m with you except for your political issues. BP is 124/78 - pulse is about 56 ar rest and I’m enjoying the pre- curserser of dementia . 😁

Wow - I haven't seen you for about a year, and I remember the "before" look. You look fantastic now! That crazy bitch in West Easton missed her chance. Keep it off Bernie - you'll live longer and happier.

Outstanding Bernie - what an accomplishment.

Great job. In my own case, realizing that you can't eat at age 60 the way you did at age 30 is the starting point. Cutting second helpings also works. Discipline.

Great job Bernie. I'm on that same road of trying to loose weight. You look great. I have the same goal you had to be able to stand naked look down and see that little thing because that big gut is gone. You no longer need a dentist mirror to see it.

Good for you, Bernie!