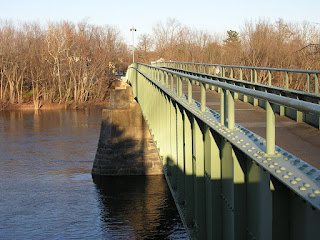 Northampton County's Conservation Coordinator, Sherry Acevedo, described plans at NorCo Council's Energy Committee on October 17 to link the Liberty State Park with the Slate Belt. This trail extends 150 miles from Jersey City and will cross into Pennsylvania at the Portland-Columbia footbridge. From there, it extends north along Route 611 to Delaware Water Gap. The trail will be available for foot traffic and bicycles. Ideally, the rail will be paved and 10-12' wide.

Acevedo calls the project a "challenge" because the 611 portion of the rail is narrow. Parking is being considered at the old railroad station in Portland.

Portland, Upper Mount Bethel Township and Delaware Water Gap have already adopted a memorandum of understanding, and now it is up to Monroe and Northampton Counties to adopt an intergovernmental agreement for the planning, design and acquisition. The Delaware Water Gap National Recreation Area has committed $50,000 to help fund the project, provided there is a match from each county.

Council member John Cusick said that state and federal funding should be sought, especially from the Commonwealth Financing Authority. He also believes hotel taxes could be used because this project promotes tourism.
Posted by Bernie O'Hare at 10/21/2019 12:00:00 AM

Email ThisBlogThis!Share to TwitterShare to FacebookShare to Pinterest
Labels: trails

Hotel tax can not be used, it is a walking path for locals

Interesting the President of Portland Town council the biggest of the town's blighted properties bought the railroad station a year ago when she realized there is money to be had and a buck made. A true slumlord. How can an elected official personally benefit like this? This is so so wrong. She should step down from the town council having all the inside info. Just disgusting trash. This is why the public does not trust anyone elected. Why would McClure be tainted with this trash? Seeing a town official benefit like this? Shame on you Lamont!

She is a true slumlord as most of her properties sit empty and unkept. She definitely saw a payday coming. She figures both the state and county will be her windfall. She has live annoying chickens against the town zoning and is above the rules. I'm surprised Bernie is not all over this. Town council president does get the info first and it's a personal benefit. If this was Me. Suspenders place they would be all over it. This smells bad and looks worse. Elected town slumlord council president profits off the tax payers.

Just what we needed, more pavement next to the Delaware River. Wait till the Riverkeeper hears about this. But alas, I'm sure the enviro nuts like conflict of interest Judy and Maya are cheering a paved "nature" trail. Pavement = heat pollution and hydrocarbons. Suck it fishes.

Bernie please investigate this Portland slumlord and expose what she thinks she is gonna pull off. Corruption at its best. What kind of elected representative pulls this kind of sleezy stuff. She needs to resign her town council seat. Secret back door deals already in the works. She is not a nice person but straight evil.

I'm not sure who the Anonymous keyboard cowboys is, but I'd welcome the investigation. It's easy to make libelous comments hiding on the Internet.

1. There has NEVER been a discussion about using the train station for parking with the owners.

2. We did buy the train station to eventually turn a profit after is sat empty and for sale for years on the open market. We're not a charity. Restoring while updating a building of that size that is that distressed is not a quick project. A trail extension is not what is going to make that building a successful investment.

3. With the exceptions of ongoing projects, our properties are occupied and far from eyesores.

If you would like to identify yourself I'd welcome the conversation.

Why not fix the roads and infrastructure with the money instead of a bike trail? A walking path does not need asphalt and is a lot better on the environment.

Is it not true recently that the National Park Service is looking into and proposing charges to use the park? Let them help the local economy for a change and use that money instead.

Who knew? There are chickens running "afowl" in Portland? That is news. Are they roosting or crowing or has one come home to roost.

Maybe their scratching for business