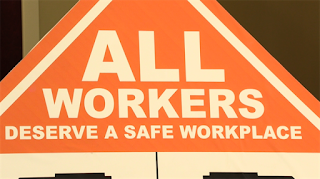 What if I told you that private sector workers have more workplace protections than our police officers, firemen, corrections officers, road maintenance workers, and other public employees in Pennsylvania? That's a question State Rep. Patrick Harkins has asked his Harrisburg colleagues. Most private sector workers are protected by the federal Occupational Safety and Health Act of 1970 (OSHA). Public sector employees, however, are on their own. Harkins has proposed legislation that would extend OSHA protections to government workers as well. His bill is languishing, however, in the House's Labor and Industry Committee. At their October 3 meeting, Northampton County threw their support behind Harkins' proposed law, which is called the Jake Schwab Worker's Safety Bill.

Schwab, a mechanic with the Erie Metropolitan Transit Authority, was fatally injured at work in 2014 by an exploding air bag. He had been using the wrong tools and was working at a garage that had gone nine years without safety training. His public sector employer is exempt OSHA protections.

Every Democrat in the Lehigh Valley delegation to the state house has agreed to sponsor this legislation. But not one Republican.

Jim Irwin, a former Gracedale employee who now works for AFSCME District 88, argued that worker safety protection should be the same for everyone. He said the proposal, first made four years ago, has never made it out of committee because of cost.

"What's the cost of someone's life?" he asked.

Council President Ron Heckman talked about his own experience, pre-OSHA, working one summer at a cast iron foundry. He and his co-workers donned leather gloves they would purchase themselves, and would wrap a wet handkerchief around their faces. By the end of the day, the entire room was a fog. "OSHA changed that," he said. "They actually got masks."

Heckman went on to say that the government often passes laws applying to the private sector, but exempts itself. "I think that stinks," he concluded.

Council member Kevin Lott recounted that he once observed borough workers dig inside a trench about three feet over their head, with no protections. "Our public sector workers are second class citizens," he complained. "You need to set standards."

Northampton County's resolution, which is non-binding, was passed 8-1. The sole No vote was from Council member John Cusick.

Cusick said he "supports worker safety," but the statewide organization representing counties is opposed to this legislation. He suggested that this group, called CCAP, should first be asked to change its platform.

Council member Bill McGee, who introduced this resolution, told Cusick he would contact this county government advocate, which is known as the County Commissioners' Association of Pa.
Posted by Bernie O'Hare at 10/04/2019 12:00:00 AM

Its about time people lookout for worker safety. It is always about the almighty dollar, Reagan destroyed this country.

It is correct to say that worker safety should be the focus of attention here. The mantra of the day, however, suggests that any topic presented should immediately be met by assignment of blame to one political party or political figure. History reveals that governments (federal, state, and local) traditionally carve out exceptions for themselves in laws like OHSA and/or they enact different rules for themselves, e.g., health care, pensions, etc. A cursory look at the original federal OHSA law, for example, seems to suggest that while it was signed by Richard Nixon in 1970, it was passed by the 91st Congress which had Democrats in control of both houses. Imagine something like that happening in 2019! The issue is worker safety and the political binders should come off so that meaningful debate, compromise, and action take place.

Anon 708am said it well. For all you political hacks out there, both parties are to blame on this one.

When both sides of government agree on something, get ready to get screwed.

The public sector needs many changes. This is just yet another bargaining chip for the politico's to stick another human with a pitch fork. Contract negotiations are said to save tax payers in the long run yet pending litigation of loss of life fills many pockets.
The old saying of pay me now or pay me later comes to mind, as two cheeseburgers for the price of one on Tuesday?

anon 10:13 stop saying they are all alike. The Reagan republicans destroyed the American middle class. Own what you are.

They're not all alike. Economic screw ups pale in comparison to JFK, LBJ, and Nixon sending 68,000 to die for nothing. And we named buildings after these murderers! Better they'd just screwed up the money.

To the Anonymous clown from a earlier post. I'm a retired municipal employee. Every time a Republican gets elected to President, my family and paycheck has been better off ( no thieves from the left attempting in taking it all , including my healthcare care).
If municipal entities follow OSHA your taxes will be going up , way up . You will need to purchase more equipment & staffing . Its been studied. It will lead to more restricted access of public places when work is taking place ( roads/bridges , parks, public buildings...)Are you willing to pay more or will you be the same one bitching about taxes going up? I bet the latter .