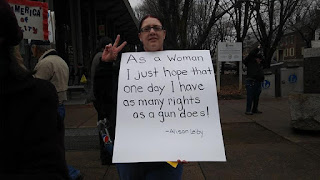 At one time, I thought there were three Democratic parties in Bethlehem. Bob Donchez and John Morganelli, who started out as errand boys for the party and former Congressman Fred B. Rooney, are now the old guard. They are still the biggest group of Bethlehem Democrats, which are virtually indistinguishable from Bethlehem Republicans. But there are numerous other factions. Club Callahan, whose leader at this point appears to be Willie Reynolds, is a bit to the left of the old guard. As you go more and more left, you'll see other pockets that include LV4All, South Side Democrats and, of course, the Lehigh U Birkenstocks. Some people consider themselves member of all these groups, like Becky Wamsley. It's a good thing, too, because she has chaired the City Dems since June.

Becky told me she first first got interested in politics a few years ago. I believe Trump's ascendancy may have sparked her. She told me that Bethlehem has a Democratic majority, but would like to see the precincts delivering more votes than in the past. She is more interested in seeing a unified Democratic vote than in siding with any of the factions.

She had opposition when she ran for party chair. But she told me she wants to move forward and to cause no rifts within her party. he goal is to increase Dem turnout in Bethlehem., and I hope she succeeds.
Posted by Bernie O'Hare at 7/19/2018 12:00:00 AM

Neither booby donchez or peter principle moganelli would make a good bump on a real Republican's butt. Speaking of butts, booby can't wipe his own without permission from his puppet masters ppm and lushy boscola

Becky's leadership is exactly what we need more of in the party. Someone who's willing to listen to all sides, but not put up with bullshit. Congratulations Becky!

LV4All is about as “left” as a group of upper middle-class white well heeled Clinton types can get.
Who said the farce is dead?

Glad she won. Her opposition tried to sand bag her. The people her opponent had campaigning for her contacted committee people by phone and in person to casually bring up that she was in recovery. Not a Democratic thing to do.

Is it any wonder people are fleeing the tired old party or simply not showing up at the polls?

Friends who are committee people got a call from Kathy Harrington trying to run a smear campaign on Becky. Luckily they could see right through her. Still not sure how Lehigh County was so foolish to put her as one of their chairs.

Also, to the commenter who said "LV4All is about as “left” as a group of upper middle-class white well heeled Clinton types can get." have you seen ROAR? They are even worse. Both groups leadership and members are too blind to see their own privilege to actually make any difference.

Democrats undercut, bad-mouth and dirty deal their own on a regular basis.

VOTE BLUE NO MATTER WHO

Apparently ROAR showed up in full force to the BCDC reorg meeting to support Becky's opponent even though none of them could vote in the election.

"Also, to the commenter who said "LV4All is about as “left” as a group of upper middle-class white well heeled Clinton types can get." have you seen ROAR? They are even worse. Both groups leadership and members are too blind to see their own privilege to actually make any difference."

I have never seen the supposed hate I hear comes from ROAR. It is a closed group.

“Democrats undercut, bad-mouth and dirty deal their own on a regular basis.”

Wait, what? Why is recovery a BAD thing? I'm confused.

BOTH PARTIES SUCK, but in Pennsylvania they control what passes for “democracy”.

@ "Friends who are committee people" I heard Zanelli put Harrington up to it.

There are still hundreds of former steel workers living and voting in Bethlehem.
I’ll bet this iteration of the Democratic Party really appeals to them.

A couple of years interested in politics.
Sounds right.

LV4All gives new meaning to the term “Republican-Lite”.
A cabal of suburban middle-aged Clintonistias who think they should rule the world.
Is it a joke or the punchline?
You decide.

She longs for a day when women have the same rights as a gun?

This is the kind of sign a republican would pay to have someone wear to pretend to be a democrat and make them look silly and ignorant.

Charlie Dent chose to not run vs anyone driving him out of office. His decision to be a never Trumper clearly aggravated his former supporters.

Lehigh Valley4all made bad decision last year to set up shop on Main St during Musikfest as people don’t like politicizing a beer festival. It cost them dem supporters that didn’t like their tactics. Wonder if they will make same mistake this year?

I thought this pic was a spoof but my wife claims that it’s serious.

I’m confused: Is Lehigh Valley Roar “progressive”, “liberal”’ “LEFT”, or a “resistance group”?
Do these words have any meaning?

I'm not surprised by the commenter linking Zanelli and Harrington to trying to sabotage this candidate. The real question should be will Harrington continue supporting/entertaining Zanelli as it becomes clearer how unhinged she really is? Others have already started backing away slowly even though they should be running. Time will only tell.

Zanelli has nothing to offer outside identity politics.
Harrington IS the Lehigh County Democratic Party. ( She pretends the wacko’s in their Allentown branch don’t exist. Two cheers for Councilman Mota!!)
Bill White claims the white wine at ROAR is free.
“Left”?
Who is kidding who here.
Please, spare me.

Ha! She doesn't even offer anything with identity politics! http://whitehallcoplay.thelehighvalleypress.com/2018/07/03/allentown-lgbt-center-grant-falls-through-4-4-vote

Maybe if the Democrats started acting like the party they once were, maybe more would vote . Hopefully many still remember why we fought in WWII and against Facism and communism. The dems are headed down that trail if they keep this crap up. And I was once a Dem, but now an independent because I believe in a system of laws for all, not individuals or groups .

Likewise with being a democrat, if you walk the walk, and talk the talk, you won't get noticed or you'll be marginalized, only cross-dressing, Birkenstock wearing, tree hugging, glassy eyed, peace sign gesturing, hipster lunatics, get promoted and get there pictures taken. Not that the democratic party doesn't have room for those mentioned but they should let the grown-ups run the party.

"I have never seen the supposed hate I hear comes from ROAR. It is a closed group."

Consider yourself lucky. Mostly older, white, upper middle class women looking only to elect the same. They are probably rubber stamping their very own "Hillary 2020" bumper stickers as we speak.