Casey: "We're Americans. We take care of each other." 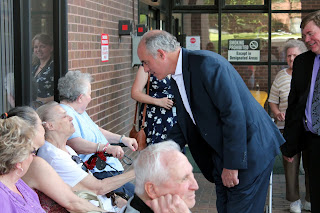 U.S. Senator Bob Casey (D-Pa) toured Northampton County's nursing home, Gracedale, on Friday. He also spoke to about 30 workers and residents at a pavilion on the nursing home campus. Below are excerpts:

Americans: "We're America. We're a strong country. We have the strongest economy in the world. We have the strongest military in the world. But that same strong county will take care of people. That's what we do. We're Americans. We take care of each other. So if a child has a disability and they're getting Medicaid, we're going to make damn sure they get that Medicaid for the rest of their life if it is necessary. And if we have to say to some rich people, 'You're going to pay for it,' that's what we do in America  We make sure that those families get taken care of. When you're a strong country like that, you can show the world that you have the values to make sure that we take care of those people." 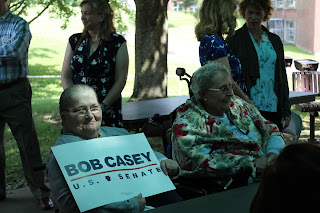 Medicaid: "That's not just a program for seniors getting into a nursing home, helping a facility like Gracedale to be able to exist. A lot of great facilities like this providing skilled care could not exist without the Medicaid program. Half of the people in our state have a disability and benefit from Medicaid. You've got kids in rural areas, small town and big cities that have health care through Medicaid. Thank God they do. But we have to make sure that we don't go in the wrong direction by allowing a group of hard right ideologues to undermine the Medicaid program and end Medicaid expansion. That's what they're trying to do. Medicaid expansion, which brought health care to 700,000 people in Pa,, and when you had people who got help in the exchanges, it's over 1.1 million. Thank God we did that. If someone in your family or someone you know has an opioid problem, they can get help through medicaid expansion. We're not going back to the days where we shortchange health care for people who need it."

"Republicans in Washington have a different idea. So what do they want to do for the next ten years? This is literally their budget plan. They want to cut Medicaid by $1 trillion. Not billion. Not hundreds of billions. $1 trillion. We're going to stop them from doing that. We're not going to allow them to do that to our families." 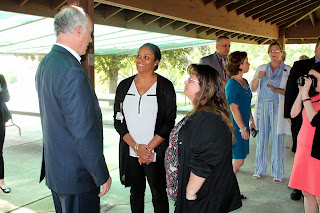 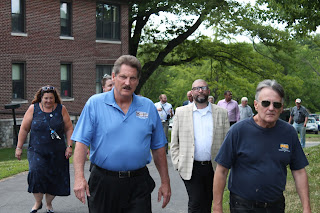 Unions. - "We would not have that middle class that I talked about were it not for the men and women of organized labor. Just imagine what our country would be like if we didn't have unions. We would have no middle class. We would not have the growing economy we usually have if we didn't have unions. We've taken that for granted. Frankly, both parties have Both parties have not spent enough time talking about the contributions of workers. We've allowed the corporate right to denigrate unions, to rob you of your dignity. Never let them take that dignity away from you. You contribute so much to our country. You helped build the middle class after WWII. You keep our economy secure because of what you do. Your work ethic makes it possible for us to run a huge government every day, to run a facility like the one we're at. You protect us, you serve us, you strengthen us and you work on our behalf. We've got to have policies that support you."

"One party is ruling Washington, and it's not like it's a moderate or even a conservative party. They're governing to the hard right."

Casey is a do-nothing lifetime politician who preaches the Schumer-Pelosi gospel wherever he goes. He comes from Scranton, home of the most corrupt politicians and government in the state. He has no moral high ground to preach from. Making stupid statements that Republicans have the money, but the Dems have the votes just demonstrates how clueless he is. Hillary outspent Trump 5-1 and lost because Trump had the votes in key states. The Dems have always had plenty of $$ thanks to union PACS, special interest groups and wealthy Hollywood liberals. So stop your whining Casey, and go back to your hibernation in Washington.

No sooner does BO post something about Casey and the alt-right teabaggers are out. Good God do you trolls sit by your Russian laptops with a beeper? You post the same monotonous, right wing tirade every time a Democratic officeholder is mentioned. Haven't you made Limbaugh and Hannity rich enough?

Toomey the tool is owned by big money.
He represents only them.

133 million people is over 1/3 of the U.S.Citizens. When 1/2 of population pays no taxes . Need to adjust perimeters ? Toomey is one of the few reasonable people in Washington. Abuse of entitlements are like when your a Walmart parking area ,watch who abuses the handicap parking area .This is just a signal on a small scale. Everybody has an excuse.

Yeah. We take care of each other with huge wasteful poorly administered government programs and sue the Little Sisters of the Poor. We're the frickin best.

I stopped reading after Casey said "the rich have to pay for it". Since over 50% pay no taxes, that leaves folks like me to foot the bill.The democrats only solution is to raise taxes. I fear for the life my grand children will face.

Where Americans all you have to do is travel hundreds of miles through Mexico, cross the border where there is no wall, find a sanctuary city or Bernie's hacienda, sign up for welfare and Medicaid, get a drivers license, and the Americans that came to this country legally will pay your way. Thank you Bob and thank you for the choice that the cities in Pennsylvania have that build Government facilities with taxpayers money, instead of finding skilled labor to build something that would cost $200,000 your prevailing wage will drive that up to $350,000.

I notice that none of these comments bother to address Casey’s remarks. They are mostly as hominems.

The wealthy to be taxed is anyone who has a job, to buy support of all those who do not, all the while a cut being taken by those like Casey to enforce the transaction.

It must be re-election time. That's about the only time Casey comes out of his closet.

We were far better represented in the Senate by Rick Santorum, who this doofus replaced.

10:47 You mean Casey actually said something? My GOD, the sky is falling.

None of Sen. Casey's topics address our $21 trillion debt. He speaks romantically of all the fabulous programs as if our debt was not 106% of GDP. If he was truly compassionate, he would work to alleviate the crushing debt with which we're saddling future generations. I don't expect he's going to leave his kids and grandkids with his unpaid bills. He'd be a deadbeat if he did. Yet, he's asking us to be a society of deadbeats and to screw those who come after us - because we got ours. Seems rather irresponsible and heartless.

3.19
glad to see you care about the debt.
Kindly mention the government program that you personally use that you are willing to give up to reduce the debt?
here's one that needs a look
https://warisboring.com/how-much-does-an-f-35-actually-cost/
"F-35 developer Lockheed still advertised the cost of airplanes sans engines. Highly respected Aviation Week reported on July 22 that taxpayers put up $98 million for each F-35A in 2013.

We will see how screwy we have become. If people elect that nutcase Barletta to the US senate then PA has become Alabama. He is crazy. Forget policy issues, listen to the guy. He is a mini-Trump.

Casey is weak,he should eat some Spinach!

Was Casey addressing the residents or the staff?Some of the residents are domentia patients. So who was he addressing? Some of our ‘ leaders’ are no different than some of these poor domentia patients as they cannot connect the dotes . Certainly some are just as productive. So- did he kiss the 3 generators we bought while on the grounds. Our guys from Post 9 have been there many times . My father - in - law cared about this project,to care for the elderly. Poster talking about F-35s and is off base .Weapons systems like this keep this nations head above water in the next fight. If some outfit dominates us here for what ever reason , then that is the end. We cannot justify canceling this platform because we need to feed the interest of non - producers. We need to SAVE the producers. To go forward. If needed kick as and take names . Horse shit!

"I notice that none of these comments bother to address Casey’s remarks"
Ok.

Casey: "We're Americans, We take care of each other."

I'm here to testify that you can take that both ways.

7.52
" We cannot justify canceling this platform because we need to feed the interest of non - producers."
a wonderful philosophy.
The true measure of a country is how it treats it's citizens.
As a super power the US can feed the hungry and care for the elderly it is all a matter of philosophy.

$21 trillion dollars? Wow! You know what that means? It means that the US economy is important to someone other than Americans and they gambled pretty heavily on it's success.

It almost seems like America lives in it's parents basement. Personally I have no problem with this arraignment.

We don't need to spend money on every harebrained defense scheme petey. America needs intelligence. We now have the idiot TRumpster in office and hopefully the republic will survive. No one can vote for Barletta. he is just a stupid version of Toomey the Tool.

Anon 8:40 - I agree with you . Values of compassion are important. What I’d like to see is ,from the heart , education to young people about the lifetime economic impact of early bad judgement. You can’t get ahead owing money to the courts or child support or paying off a wrecked car to finance company that has you by the short hairs. It’s bad enough to owe student loans ,Evan if that person has been a model citizen ,it’s a drag on them . I would deal with the destitute all the time . They all have a common denominator. They spend on alcohol or weed and cigarettes and they make the wrong transportation decisions. They don’t pay themselfs first or save for when they old like me . The same families on ‘the stamps’ exists for years and the kid got a 300 C with tinted windows ! But you can’t fix stupid! Good day all. By the way I already spent 385.00 bucks on food for people this year that just needed a push start to help between checks .

10:33 pm
"We don't need to spend money on every harebrained defense scheme petey"

You will understand the plan when one day you'll read Bernie's blog and it will be reported that America now owes the world 1 billion gah-zillion dollars, but they won't complain much or for long.

When some people say they don't believe in borders they mean something different then most folks think.

"We were far better represented in the Senate by Rick Santorum, who this doofus replaced."

Google Santorum on the internet and see what comes up.lol!

anon 5:08, apparently you are the wisest person in the country, since you know so much.