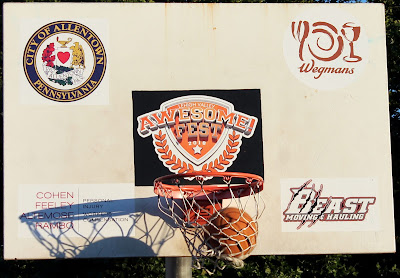 The A-town Throwdown, aka the Awesome Fest, is going strong at Allentown's Cedar Beach. Forty-eight varsity boys' teams, most of them local, are in hot pursuit of this year's championship. I was there this afternoon, under the best weather I've ever seen at one of these tournaments, and saw some exciting games. I watched Easton lose a heart breaker to Constitution while simultaneously, one court over, Dieuruff's Huskies were being schooled by Sankofa's Wolfpack in a physical game with at least five technical fouls. I watched Allentown Central Catholic High School march convincingly into the sweet 16, despite the loss of some valuable seniors. Keith Groller has all the details of the games here.

What I and hundreds others really loved best were the three-point and dunking contests on Saturday night. Get this. Incoming Allen High School freshman Nate Ellis won the three-point contest, edging out luminaries like ACCHS's Nick Filchner and Becahi's Justin Paz.

The dunking award is based on points awarded by judges, like figure skating. That's too subjective for me, but everyone loves it and the trophy went to Eastern Academy’s Jibrel Bethea.

Toomey Anderson, like Glenn Klein is really selfless. For both, it's all about the kids. Toomey even scheduled musical performances between the three-point and dunk contests. I really like that idea and think it could be converted into a contest, with a champion determined at the end. Some people say that we love sports, but should pay attention to the arts, too. I agree. This would be an opportunity for gifted singers and musicians to perform in a celebration of both.
Posted by Bernie O'Hare at 7/08/2018 12:10:00 AM

How is the quality of officiating at this event? Is just like during the school year?

I'm just a fan. Players and coaches could answer that question better than I. In the summer league games, there are usually only two refs instead of the three during the regular season. So some fouls will be missed. But the refs are basically the same guys who officiate during the season and I believe they make a serious effort to be fair. The refs in our area tend to let the kids play, but closer to Philly, they are stricter. That screwed us up a little in playoffs. But teams from outside our area likely get a little screwed up by our refs.

I have never seen a ref act unprofessionally on the court. Never. I disagreed with lots of calls, but they are human and closer to the action.

Did you read or see the videos of the AAU tournament between the players and the refs? Bad stuff.

Bernie, thanks for your continuing to showcase the great basketball we have here! It'll be another great season coming up.

"Did you read or see the videos of the AAU tournament between the players and the refs? Bad stuff."

This is about high school basketball, not AAU. I really have little interest in most of what goes on there and consider it over-hyped. Unless you are very lucky to have a good coach who is interested in teaching and knows the game, it is very disappointing and only teaches kids to be selfish.

"Bernie, thanks for your continuing to showcase the great basketball we have here! It'll be another great season coming up."

Should be a very good year for Emmaus.