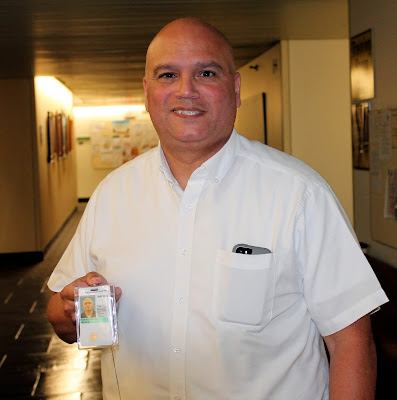 A few months ago, Lehigh University's Dr. Stephen Thode chronicled his difficulties in obtaining a simple ID card, known as a VIC, from our Veterans Administration. That's nothing. Freddie Ramirez, Jr., is Director of Northampton County's VA office. It took him six years to get another kind of ID card from the VA that is supposed to give him access to VA buildings and their computer system. The VA managed to screw up his name and the card does not work. But it does have a nice plastic cover.

Executive Lamont McClure said we need to do a better job for our veterans. He gave an example. A few weeks ago, county officials were set to release a homeless vet who has a substance abuse problem. Allentown Rescue Mission was willing to accept him, but he had no way of getting there. Neither the judge, prosecutor or public defender had any idea that the county has an agency that could have helped him. The public defender dug into her purse for a $20 and was about to give it to this fellow until someone pointed out that the county could help. And it did, with vouchers so this gentleman could get where he needed to be.

McClure believes the County needs to do a better job of making people, especially those in the criminal justice system, aware of what the county can do to help veterans.

Lori Vargo Heffner drove this point home at yesterday's Human Services meeting, and in the coming weeks, I will spotlight what the county is doing to help our forgotten veterans.
Posted by Bernie O'Hare at 7/20/2018 12:14:00 AM

Email ThisBlogThis!Share to TwitterShare to FacebookShare to Pinterest
Labels: veterans

Trump derangement syndrome has set in the White House and little hands feels he needs a $12M parade. That money would be better spent supporting our vets. Spending $12M on a military exercises w South Korea was too excessive but spending $12M on a paraded for Putins poodle is ok. Support our vets, not blemished egos.

He should be praised. Hopefully he was treated with respect by these liberals.

Trump signed a new Executive order to ensure veterans have the resources they need as they transition back to civilian life.

Vets are baby killers until lefties can use them for political gain.

You have the freedom to be an asshole and a coward thanks to countless vets.

I received My V.A. photo I.D. card about a week after I was entered into the system.In normal times I would advise calling your Congressman.I managed to remember Congressman Dent abandoned his position and the Lehigh Valley does not have one

Checked out the video. Fortunately a few of the county people understand just what the local offices do and sounded intelligent. The others are clueless. They don't realize that services come from the feds and not are local office. They need to get an education before they act like they know it all. I thought a few were disrespectful to him. He should not waste his time doing paperwork just to satisfy the bureaucrats. Let him do the job he was hired to do.

That is why Freddie was there, to educate everyone. I did not get the idea he was being disparaged at all.

The Civil War Vets and there families charitable contribution are deffinatly forgotten as well asas been misplaced?

The one woman was telling him how to do his job. Isn't she new to the county?

On the video feed it was the Hefner woman who was telling him how to do his job. She needs to learn hers and let the man help vets.

Lori Vargo Heffner believes the public needs to be more aware that the county VA exists, and McClure's example proves she is correct. She mentioned that she is new and that she had no desire to insult Freddie. Did you miss that part? Her father is a WWII vet and she told Freddie that the treatment he received was subpar. Should she have kept that to herself? Wouldn't a good administrator want to know that? She is a mental health professional whose goal is to improves the quality of human services delivered by the county. I believe she was doing her job. Freddie seemed to be ok with it. yes, the county's role is very limited, but it can help connect vets with the federal services out there.

The VFW knows he is doing a great job. That woman is a bully and probably had a bad attitude with him. So now he will waste his time on paperwork instead of the great work he does for all of us. Just because you have a thing for her should not change the fact she doesn't know what she is talking about.

VFW? Put down the vodka.

The great america liar should spend $12M on our Vets than spend it on a military parade to stroke his ego. Even service men and women think it is a bad idea.