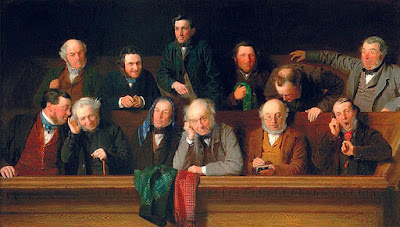 John Morganelli is a practicing Catholic. He is also Pennsylvania's most senior District Attorney. He wants to be able to review a statewide grand jury report into decades of alleged sexual abuse and cover-ups by Catholic clerics. Nearly two dozen of them are attempting to block the report from being made public. On Monday, he called on the Pennsylvania District Attorney's Association to file an amicus curiae (friend of the court) brief with the state Supreme Court, calling for the report's public release. Morganelli is himself a past president of that organization. If necessary, Morganelli said he would file a brief himself.

Morganelli, a prosecutor who has long used grand juries as an investigatory tool in criminal and noncriminal matters, is concerned that the system itself is under siege. In addition to its use in criminal matters, Pennsylvania's Grand Jury Act permits a grand jury to make recommendations for legislative, executive or administrative action that are in the public interest. Morganelli has used the grand jury to seek changes at the National Museum of Industrial History, Easton Area School District and Bethlehem City Council Statewide grand juries have also delved into the Turnpike Commission, Philadelphia Department of Human Services, and child abuse at the Philadelphia Catholic Archdiocese. in Chester County, a grand jury admonished a school board that engaged in rampant cronyism and nepotism, including the hiring of felons.

Those seeking to block the statewide grand jury report argue that the process for those who are criticized, but not charges, is unconstitutionally insufficient. These unnamed clerics argue that due process and the state constitutional right to reputation gives them the right to see and challenge evidence and make their own case.

Attorney General Josh Shapiro did give these unnamed clerics and unrestricted right to file responses, which would be released simultaneously with the report. They also have the right to council if called to appear before the grand jury. Morganelli argues that what these unnamed objectors really seek is to "eradicate the grand jury report as an instrument of accountability for public and private institutions."

Morganelli said he was an arrangement with the Allentown Diocese under which he is notified whenever an allegation is made against a priest. The Allentown Diocese, incidentally, has no objection to a public release of the grand jury report. Right Rev. Alfred A Schlert has asked everyone to join him in praying for "the victims and survivors, and for all those hurt by child abuse, wherever it occurs in society."

According to Morganelli, it was common for English grand juries to issue reports on non-criminal matters, and that practice was carried over the the American colonies. They served as watchdogs over state and local government, and reported on numerous matters, from road conditions to jail overcrowding to the financial accounts of public officials. In early America, where a public distrust of authority meant there were few police departments, grand juries were the investigators.

In recent years, grand juries have come under criticism as rubber stamps for the prosecution. Sol Wachtler, the former chief judge of the New York State Court of Appeals, once told a reporter that grand juries should be eliminated because prosecutors had so much influence over them that they could get them to "indict a ham sandwich."

Later in his career, Wachtler was himself indicted for extortion, racketeering and blackmail. He did 15 months.
Posted by Bernie O'Hare at 7/10/2018 01:30:00 AM

I think they need to reinvestigate the PA turnpike commission. Its constant toll increases are bordering on criminal, while the road surface conditions are rivaling those of penndot highways. I speak from the experience of just having driven the southbound stretch from i-80 to Mahoning valley.

Dude, you drove a stretch of about three turnpike interchanges.

Where is the DA report on Pawlowski?

Why would there be a DA report on Fed Ed? And the Fed grand jury released a detailed indictment followed by a lengthy and public trial. What the hell are you talking about?

Less time on big press conference type issues that are at the state level and more time on local stuff. Isn't the county having legal problems with its authority? How about checking that.

Excuse me, but the power of a grand jury is something that should concern every DA. That is a local issue.

When journalist Paulette Cooper went after Scientology they responded with "Operation PC Freakout".

These large, many cases tax-free organization, have deeper pockets than Harvey Weinstein who was able to hire "Black Cube", a group of retired Israeli Mossad and ex-security and surveillance state employees, to orchestrate their own "Freakout Operation" on HIS rape victims to silence them.

Those that understand the types of services that can be purchased legally by those with the resources to pay regardless of their crimes, would think JM is a brave man despite his position or jurisdiction.