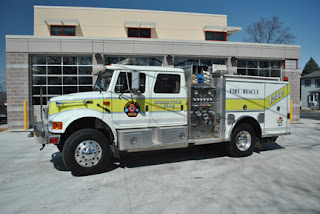 It's seen better days. When Bethlehem Township Volunteer Fire Co. (BTVFC) Engine 1742 was first placed in service in 1995, it was a four-wheel drive behemoth capable of traveling off road to deliver a 500 gallon payload. In addition to extinguishing brush fires, its off road capabilities made it suitable for accidents in which cars are knocked off the highway. But after a 2002 accident that caused significant damage, firefighters can no longer use it as a front line resource. "You can run faster than it goes up a hill," Fire Chief Dave Stapinski told Commissioners at their July 2 meeting. He's also concerned that this truck would be unable to fight fires at some warehouses along Brodhead Road, where forklifts are charged in the back of buildings on uneven surfaces. After hearing these details, Commissioners voted 4-0 to authorize the Fire Company to purchase a new truck.

This purchase was tabled two weeks ago when Commissioners said they'd like more information. This upset firefighters, who complained that the Board already approved a $10 million line of credit for this and other purchases in 2014.

"These are the guys who are getting out of bed and aren't getting paid and they protect all of us," said resident Barry Roth. "We need to have a better relation with these guys. They are not our enemy."

Commissioners also awarded a carpentry contract for the restoration of the Archibald Johnston Mansion at Housenick Park. Contek Construction,based in Macungie, was the sole bidder of a contract that could be as high as $334,475. 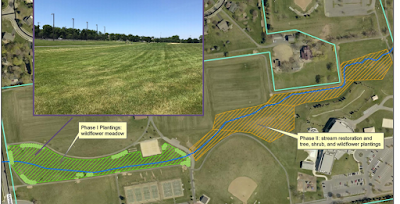 Commissioners also endorsed a $57,000 agreement with the Wildlands Conservancy for the restoration of a Nancy Run tributary at the Municipal Park. Wildlands plans to create a wildflower meadow along both sides of Nancy Run at the entrance of the park. Traveling wast and around the community center, the plan is to restore the stream bed followed by the planting of trees, shrubbery and wildflowers.

According to The Wildlands, erosion and sedimentation are evident in Nancy Run as a result of stormwater runoff and poor management practices. Trees and wildflowers are believed to provide streambank stabilization, erosion control, flood plain storage during storms, wildlife habitat, run off filtration and aesthetic appeal to some people. This lowers the water temperature, making even a small stream more attractive to brook trout.

To be sure, riparian buffers also make it harder to see or access a stream, and for that reason, I'd support a plan that would allow access so people can wade or just dip their feet on a hot summer day.

The Wildlands has applied for grants to fund half the cost of this project, with the rest coming from the Township.

According to Penn State Extension, riparian buffers are the best way to protect the health of waterways, livestock, adjacent property, and all who drink and use water downstream.
Posted by Bernie O'Hare at 7/03/2018 12:00:00 AM

The Johnston Mansion really is a beautiful building, and it's a shame it has fallen into disrepair to begin with. But for what purpose will it be restored? It doesn't seem as though it would be particularly useful for the county, except maybe to rent out as a small conference center or something. For that kind of money, they should really focus on the park, planting native trees and shrubs on what is now an over-landscaped part of the estate (as compared with the adjacent Archibald Johnston Conservation Area), that appears to require a lot of regular maintenance.

As for the plan for Nancy Run, right now there really isn't much stream to see or access that far upstream (it kind of just looks like a ditch where it is visible at all), but it does look like it is in pretty desperate need of riparian vegetation. Like you said, riparian vegetation cools the water temperature (also preventing evaporation), and filters out a lot of the stuff that can be found in run-off (road salt, fertilizers and other lawn treatments, etc.). All of this is particularly beneficial close to a stream's headwaters, as this site is.

Speaking of streams, it would be great to see the little dams in the stretch of the Monocacy that runs through the Johnston Park/Conservation Area. There are at least two in that stretch, and they don't do anything but make the water warmer now that they aren't used for mills.

*I meant it would be great to see those dams removed.

I am unaware of any great hue or cry to preserve them and they serve no purpose. There are a few downstream that have great aesthetic appeal.

As for the mansion, at this point its future use is undetermined. The Housenick trust has offered to pay half the cost of a consultant to come up with ideas.

From the picture the Truck does not look like its in that bad of shape. It seems the Fire Company wants to get rid of the truck due to Engine Performance issues. With advancements in Tech with Engines these days I'd look into refitting the Truck with a higher horse power engine "maybe dual turbos" or just brute HP. WHY must the Truck go

Any discussion regarding the stalled Birchwood Commons (Pektor) development?

Good news for the locals with Livestock.

Allentown's Park System has been destroyed by these buffers. Such barriers should not be continuous along the banks of both sides. Space them apart with enough room for Humans to enjoy the same water flows.

All these same tributaries managed to survive years before there was a Wildlands Conservancy. Nature is capable of adapting on its own.

Access points to what, though? Nancy Run is barely even a trickle by the municipal park, it's not a creek like the Monocacy. Certainly nothing you could swim or fish in.

6:08 - Truck engines have been forced to evolved rapidly in the last several years to comply with EPA requirements for sulfur emissions. It's unlikely they'd find a replacement engine compatible with that truck.

@6:08,
It's amazing what you think you can see from a photo. Would you expect this truck to be photographed with parts hanging off of it? The issue with the truck is not something as simple as cosmetic attractiveness. Are you the commissioner who thinks that apparatus from the 1960's is all anyone needs?

7:48, there is no need for your vulgar language.

8:22, 9:02, This is not about Allentown's park system, but BT. But generally speaking, these buffers are a good thing for lots of reasons. I agree that some spots should be set aside for people who want to access the creek in A-town.

8:22, When Wildlands Conservancy was founded in 1973, Nancy Run was surrounded by farmland, not residential areas, and it didn't even run through what is now the municipal park. Nature can't "adapt" when we change land use patterns so dramatically and so quickly.

7:14 Uh...yes, the Nancy Run did run through what is now the municipal park. That area was not developed so you likely did not notice it before, but it was there. The headwaters of the Nancy Run are mostly spring fed. Back in the day the Nancy Run used to be a Class A wild trout stream. Sadly now it's become more of a drainage ditch due to all the development along it's headwaters.

You have a laudable goal in that you intend to help the environment. But, you are NO Mother Nature, and never will be.

For thousands of years streams have come and gone. When it rains heavy enough, they develop and flourish. When it does not, they go away or take another path. All the money in the world isn't going to change that. Nor should it.

What's happening here is, the Wildlands Conservancy is tapping government grants to address problems that, maybe, are not really a problem. It is life doing what it does.

Why not dedicate yourself to making the continents move closer together? That might just be one big government grant away. Right?

No one is pretending to be Mother Nature. Nor do I pretend that Nancy Run is a raging torrent. But this is a good thing. A meadow will serve as a sponge for storm waters that inundate BT. Trees and shrubs will keep this stream from eroding. I am aware that the Wildlands seeks grant $ for these things, but that does not make them bad nor does it mean that The Wildlands is some corporate monolith. There are also some drawbacks to riparian buffers, but they are generally beneficial.

BT needs to really examine why they are funding two fire companies. Don't use the ambulance excuse with Bethlehem Township FC. Many times both show up at the fire or accident together. Merge, get along and reduce costs to the residents.

They did examine that and conducted a study and concluded both are needed and there is no duplication.