Yesterday's finance committee hearing was particularly important. Executive Lamont McClure wants to float a $26 million bond, and the county's financial adviser gave an excellent presentation that even I could understand. Tara "Down With the Patriarchy" Zrinski, an elected member of Northampton Council, was MIA. I assumed she must have had some unavoidable conflict. I was wrong. She blew off the meeting for politics.

Zrinski has blocked me from her Facebook page, but one of her friends sent me this explanation of what she was doing yesterday instead of representing the people who elected her: 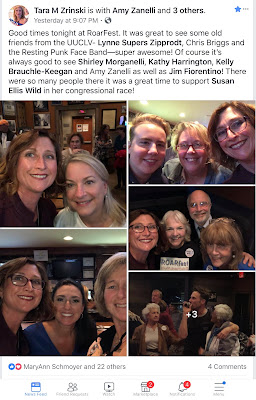 In stark contrast to Zrinski, Lori Vargo Heffner actually cancels appointments so she can attend these meetings, depriving herself off income. Matt Dietz will decline work assignments for the same reason.

This is what politics does to a person- she has been a major disappointment!

She should resign from her position

I hope Wild has a job for her IF SHE WINS

Thank you Tara for robbing me of my representation

What an arrogant POS! Zrinski needs to resign- immediately! But she's waiting for a job from the Wild thing!

Lying in a court hearing about leaving young children alone in a hotel room so you can be alone with your boyfriend is terrible.

major disappointment, not what she portrayed herself to be

Yeah- SERIOUSLY!! Lying to a judge's face and leaving small children alone in a hotel room to be alone with your boyfriend shows lack of character and bad judgment. I am sure these facts will surface in her future campaigns. I also notice rare silence from her and her supporters-- hoping it will all go away-- but it won't.

Why oh why do you people not have OHare blocked on your social media sights? I have three people blocked on mine and one of them is definitely the disbarred lawyer with severe mental issues.

Boy oh boy that’s the cream of the crop of Bethlehem hackdom right there.
It’s just like old times minus the IM WITH HER signs.

It will be interesting to see who gets the staff jobs in Congressman Wilds office.

Zanelli is a poster child for the New Democrats.
An identity politics twofer that is as clueless as they come.

2:55 this post is not about Zanelli are you high again?

“Good times at ROARfest.....super awesome.”
Yeah.
ROARfest.
Super awesome.
These are the people who are ready to save us the patriarchy?
God help us.

She goofed. Her responsibility was to go to her meeting, not a political function. She needs to apologize and not so it again. Tired of all the excuses. You ran for an office and got elected, now do your job or leave. Apparently she is already bored an dis trying to get a higher job or office. That is shameful.

Doom's blame Bernie for your flaws.

Irresponsible and does not take her job seriously. A real winner.

Doesn't she preach to others about ethics and values? Or bought a degree in something similar? Sounds like it's time for an intervention. Whose house is made of glass should not throw stones at another.

Wonder what lame "victim" excuse she will have.

so Bernie wants to attack a woman who does not kiss his old angry white man's ass.
Plenty of people have missed meetings yet they do not get hit with a 16 ton anvil.
Bringing up an event from 10 years ago for the sole purpose of making her look bad,
which has nothing to do with attendance.
Bernie has decided to hammer anyone who does not bow to his old white man idea of power.
The sad part is the attack has nothing to do with political activity it is based on one man having a temper tantrum over being ignored.
it must be upsetting to find out that the world does not revolve around you.

BS. Missing a meeting as an elected official to attend a campaign party?. . . is just something that happens and the public should not only condone but encourage this behavior? I'm curious as to why the campaign event was more important than going to work?

Who is having a tantrum?

Just think how much better all our lives would be if only she went to that meeting.

She deserves to be criticized for missing the meeting. The mention (yet again) of her 10 year old sanction reads as a desperate attempt to smear her. The post would have been more powerful without it imo.

You're right. But hey she could have come over to my place and try to sell me on some nice solar thingies. Drinking beer and having a good time while on the public dole does sound like a better use of time though.

7.05
so you have the same outrage for every pol who misses a meeting?
or is the outrage based on something else?
perhaps you do not like her so any excuse to tear her down will do.
if you are truly impartial congrats you can cast the first stone.
if not then you are just working off a grudge

7.22
smearing was the intent.missing the meeting was merely the excuse.

Hubris will get her sooner rather than later.
She’s too cool for school with a mediocre intellect. A bad combination.

She’s complaining she tried to call in. Her Facebook tells a different story.

7:25
When you are paid for said meeting with public money there should be a certain level of outrage. While I'm not stomping around the house kicking the dog I am a little disappointed. Any taxpayer that is not disappointed in her poor choice or doesn't have an expectation that elected pols show up for work exacerbates the problem.

7.40
basically an excuse after the fact.

Damn Bernie, you have lowered yourself to the skank of West Easton's level. What the hell does perjury have to do with this?

His point is overall honesty and integrity. At least I think. Also being judgmental of others on Facebook.

Makes you so proud to be a DEMOCRAT Bernie?

... and to miss it for a ROAR fest of all things. This group of women led by Shirley Morganelli gives all feminists a bad name.

A Star is Born

Phoebe Harris on Allentown School Board misses meetings like this too. She missed one over the summer to attend the Democrat unity party and then last month to go to Jessica Ortiz' birthday party at a sports bar downtown. Ignores campaign finance report requirements, skips meetings... great record.

Phoebe Harris is not suited for any level of public service.

Nothing to see here..keep moving.

multiple kids and multiple m3n can be problematic.