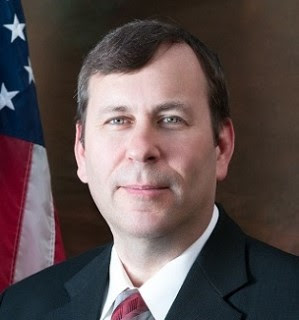 It's true! Northampton County Council President Ken Kraft has resigned, and he's going to jail. But unfortunately, there's no scandal.

Executive Lamont McClure has named him as Public Safety Deputy Director of Corrections. McClure said he needed someone to deal with vendors and review contracts, line-by-line, and that person is Kraft

"Corrections is not a softball industry, and we need someone in that position . . . who has negotiation experience, who has experience reviewing contracts, line-by-line, who has experience with obstreperous opponents on the other side, . . . an irascible person, a person who may not always have the requisite patience they might necessarily need . . . you might want somebody like that, somebody a little mean . . . ."

Naturally, he thought of Ken Kraft.

Kraft accepted the position and offered his resignation from County Council, effective last night. It was accepted with regret.

Kraft, 57, was first elected to Northampton County Council in 2011. He was re-elected in 2015. He recently retired as president of District Council 21 of the International Union of Painters and Allied Trades. On Council, he was the driving force behind he purchase of an archives building in Forks Tp and a Centralized Human Services Building in Bethlehem Tp. He was a strong advocate of Gracedale and was the sole member of County Council to vote No on a controversial P3 project to replace or repair 33 county-owned bridges. On Council, he developed a reputation for being able to read proposed county contracts, spot problems and ask tough questions.

He was a bullshit detector.

Kraft occasionally claims to be a Marine and a master diver.

I neglected to find out how much he's getting paid and will update this post with that information when I get it. He is serving in an exempt position, which means he serves at the pleasure of the Executive.

First, who is going to succeed Kraft as president of County Council?  The obvious choice is Ron Heckman. He is the most experienced Democrat on the Board. John Cusick is the best organized of that bunch, but he belongs to the wrong party. Heckman will be far more civil than Kraft was to the public and even fellow Council members. That's really not saying much. Pennywise the Clown is nicer than Kraft, and gives away balloons, too.

Second, who's going to succeed Kraft on Council?  Kraft represents the Bethlehem district on Council,which consists of Bethlehem, Hanover Tp, Freemansburg and Hellertown. Any registered voter, Democrat or Republican, who lives in the district is qualified. As a practical matter, a Democratic board is going to appoint a Democrat to a position that was held by a Democrat.

Council has 30 days to make an appointment. The position will be advertised today and a successor will be appointed October 18.

For months, it has been rumored that Kraft was going to get a County job, and that he would be replaced by Kevin Lott, the business agent for the Lehigh Valley Carpenters Union as well as a Hellertown Borough council member.

Lott was instrumental in the 2015 prosecution of Bethlehem construction firm Salukas and White for defrauding workers of decent wages and the government of taxes by deliberately misclassifying employees as subcontractors. Lott Lott accused the firm of "exploiting people" who will end up on welfare when they turn 65 because they will be unable to collect social security. "It's a shame on every level."

Lott also sued over the P3 bridge project, but withdrew his challenge.

He is among those who submitted letters seeking leniency for former Allentown Mayor Edwin Pawlowski, who was convicted of political corruption. Lott made clear to me that he personally witnessed Pawlowski help the disadvantaged in Allentown, and that's why he spoke up for him. But it's equally clear that his union made campaign contributions and then received work.
Posted by Bernie O'Hare at 10/05/2018 12:00:00 AM

More BS. This is nothing more than political payback. There is no need for this position when the County has a Purchasing office and attorneys to negotiate and review contracts. Total waste of taxpayer money. Who is left in the Kraft family to get a County job!

It was long rumored that Kraft would be offered a county job. I do not dispute that this is political payback. An Exec is entitled to his own cabinet and several other exempt positions and usually fills them with people he trusts. You could argue this is political payback. I'll agree. But I'll add it's important that an Exec have some people in his admin whom he fully trusts and with whom he can be himself. If they are good, they will tell him what is going on, not just what he wants to hear.

Every Executive hires people they trust. At least in this case the person is qualified. Stop pretending this is something new. Happens in the private and public sectors.

Money McClure at it again. The Monty of the county. Just keep spending McClure sooner or later there wont be anyone able to afford the taxes here.

Geee Kraft are You going to release all the union criminals.......lol

I disagree. This man will not have a iota of whaT goes on in the prison the day he gets there. My impression of him is that he will figure it out. I’m a hard R ,and I say this man is capable. Next ,come after Judge Murray - then come thru me first.and see how your steaming after a shot over your brow. I have never met Kraft ,he does not know me ,but he has exhibited integrity. So don’t beat him up yet. Anon coward ,The judge Has been known by me 35 years. I will defend him . So go fishing instead.

A comment that purports to be from "River," but which really was posted by Tricia Mezzacappa, has been deleted. River, aka Henry Schadt, is dead, and has been for some months.