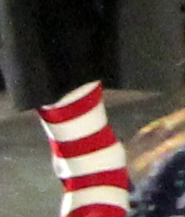 I've already told you briefly about the Pa-7 Congressional debate taped for WFMZ-TV69's Business Matters on Tuesday.  It included Democrat Susan Wild, Republican Marty Nothstein and Libertarian Tim Silfies. I nearly missed it because I was given directions to Coney Island in Scranton for some reason. I arrived just as the crew was getting the 175-person audience fired up to applaud wildly at the beginning of the show.

This was a show. That's my main problem with it. A few weeks ago, I listened to a Pa-7 Congressional forum at WDIY's "Lehigh Valley Discourse," i.e. Lehigh Valley Elitists. Now that's the worst show, not just at WDIY, but perhaps in all of radiodom. It is so bad that it has included disgusting guests like me. But when Alan Jennings hosted the three Congressional candidates, he let them provide detailed answers to well-considered questions. The result is that all three candidates sounded great. There were no gotcha' moments or pretend arguments.

This pattern continued at the CACLV annual luncheon, in which all three Congressional candidates were given ten minutes to explain what each would do to lessen poverty.

A debate format is different. A TV debate is one in which the candidates are more or less limited to sound bites and gotcha' moments. In a country and congressional district that is already incredibly divided, a debate can drive us further apart

What made things worse is that all three candidates were blinded by Tony Iannelli's socks.

I hope they recover.

Tony made a point, at the beginning of each segment, of complimenting the candidates for putting themselves out there. He also should have insisted on civility from the audience.

Throughout the debate, I was appalled to see Lehigh County Comm'r Amy Zannelli and two female friends  cheer loudly just about every time Wild opened her mouth. They loudly booed Marty Nothstein a few times, too.

I came to this debate to hear the candidates, not Citizen Amy Zannelli and her mini-gang. If we really do care about civility in public dialogue, audience members should have the basic decency to let the contenders speak.

It's hard for me to buy into Wild's claim that her top priority would be campaign finance reform when most of her money comes from special interests in California, New York and Massachusetts. Nothstein said candidates should be limited to money from their district. That's the very point made eons ago by Democrat Russ Shade when he ran against Julie Harhart.

Last week, Nothstein issued a news release claiming he wants to be known as the education congressman, and will raise private funds for after school activities in Allentown. He failed to mention this even once during his debate. That was a missed opportunity.

Silfies constantly pointed out that the parties represented by Nothstein and Wild are dysfunctional and have led to gridlock. He's right, but did a poor job of explaining to Tony how he'd make a difference all by his lonesome. At one point, he actually claimed we need to be more that bipartisan. We should be nonpartisan. Then why the hell is he running as a Libertarian?

The zingers of the debate, at least for me, came when Wild was arguing she'd be great in Congress because, as a lawyer, "I have to work with a lot of very difficult people."

Nothstein responded, "We have a lot of lawyers in Washington now. It hasn't been working."

Wild came right back and said those lawyers are needed because "Congress makes laws."

They do, but they also appropriate money. A lot of it.

If I had a question, I'd ask Wild and Nothstein to state where they differ with their own parties. I'd ask Silfies to explain where he agrees with the mainstream parties.

Email ThisBlogThis!Share to TwitterShare to FacebookShare to Pinterest
Labels: Congress

Zannelli is like fly scat, she goes everywhere with her fake smile. She loves the spotlight and enjoys reminding people she is gay. Even some gay folks have said it gets annoying. She has the new lesbian smell about her yet,just like anew car. She thinks she is a lot more than she really is in fact.

Amy Zanelli and Susan Wild are the kind of proud progressive, Democrats that are the future of the party.
Get on board or get out of the way.
BLUE WAVE

The big fib of the day was when Nothstein suggested "democrats suggested we would never reach 4% growth. During Obama, we reached 4% on more than one occasion.

Nothstein went on to say we are at 4% sustainable growth. Really? August was the first time we reached 4.1% quarterly growth. How is one data point evidence of sustainability? Especially during a week when Ford announced layoffs due to $1B loss due to trump consumer tax (tarrifs). The market continues to tumble with a couree correction with another one day 831+ point drop (3rd largest one day). This week Nasdaq loss 4.1%, S&P lost 3.3%, and Dow Jones lost 3.1%.

Alec Young, managing director of global markets FTSR Russell said "tax cuts juiced earnig this year and that is not sustainable". "The market is starting to say the glass is half empty."

While the govt induced a tax cut on a credit card and added nearly $3 trillion in debt, we are not in 4% sustaniable growth. The markets and slowing job # prove that.

...to clarify 724....I think it is more of an overstatement. One data point is not conclusive especially when jobs feel short of projections and the adjusting market.

Rumor has it Zanelli's wife is running for Bethlehem City Council.

Hypocrisy is a leftist job skill.

I'm surprised that Zanelli had the time to go to the debate on Tuesday, since she had to prepare to vote to raise property taxes at her commissioner meeting last night.

Even though the democrat County Executive admitted that the tax hike was unnecessary this year, Zanelli still voted against sending the tax-hiking budget back to be re-done without a tax increase. She even said it was "deplorable" that people would vote against the tax hike.

We should be nonpartisan. "Then why the hell is he running as a Libertarian?"

Being "all by your lonesome" outside the two party system is as non-partisan as a candidate can be at this time, Libertarian or otherwise.

Someone needs to be the tip of the spear, perhaps that's Tim Silfies, I don't think he is alone among the electorate in believing Democrats and Republicans are opposite ends of the same problem.

Both Democrats and Republicans are trying hard to legitimize the process by getting out the vote, knowing full well, there is little difference between how they operate and almost no viable alternatives to their shill game.

Tony, most likely is a gang member of sorts and understands and has benefited by associations, but the individual is what this country is all about, and to stand by your lonesome is to have courage, and I applaud Tim for his.

Silfies has no chance of winning.

If you want Wild in office in order to make a statement, throw your vote away and vote for Silfies. Watch her vote against your Libertarian values.

If you truly believe in Libertarian principles and want somebody to represent you, vote Nothstein. If you look at their websites, they're very similar in their positions.

There are good races where Libertarians should be running. This isn't one of them.

Both are as local as McDonald's and I'm to old for that now.

I live by my principles and that's how they are represented in the world, and like Tim, I often take the road less traveled.

Maybe you should try it...we could change the game.

Did tony the cross dresser steal those socks from the wicked witch of the west. Is he for real? Talk about desperately seeking attention. What a clown.