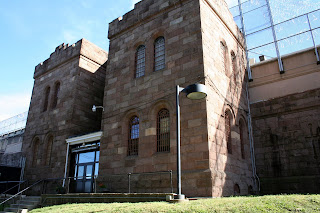 One of the reasons why former Exec John Brown wanted to spend a gazillion dollars at the jail and move it to Gracedale is because he was sure it would never pass state inspection. It just did.

Both the Jail and the West Easton work-release facility earned full compliance during the 2018 inspection by the Commonwealth of Pennsylvania Department of Corrections. No deficiencies or citations were cited within the report.

Due to this achievement, the Northampton County Department of Corrections is exempt from the normal one-year inspection cycle and won’t be inspected again until 2020.

“We’re very proud of the men and women who work at these facilities,” says Executive Lamont McClure. “This report shows that, by their adherence to safety protocols, our employees are keeping the inmates, the public, and themselves as safe as possible.”

Email ThisBlogThis!Share to TwitterShare to FacebookShare to Pinterest
Labels: jail

"We're very proud . . . " -- then give them the salary they deserve for risking their lives with the criminals. Put the money were your mouth is for the County assets.

There so proud of the state inspection ..and yet they dont even get a thank you all they get is your mandated and no raise gee.thanks

Check the tally of county jails that have been inspected and you might find that most pass every year. Why?