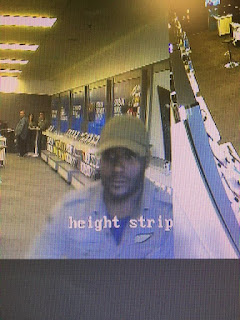 Lower Saucon Police - On October 19, 2018 a male (see photo) entered AT&T store at 1869 Leithsville Rd, removed two I-phones from the display and ran out the door and got in a silver Nissan Altima. Anyone who may recognize the male is asked to contact Lower Saucon Police.

Bethlehem Tp Police locate Rooster named Pepe who ran away from home in Miller Heights. "My rooster is white and black he is very little not the typical rooster," said the owner.

Palmer Tp Police have received three new vehicles equipped with a SoundOff Signal bluePrint system. This vastly improves officer safety and efficiency. Officers are constantly occupied with technology and other distractions that require a shift in concentration and a refocus of the eyes and hands. bluePRINT allows officers to stay focused on the task at hand while keeping their eyes on the road and hands on the wheel. Light and siren configurations are pre-programmed and prioritized to respond to emergency situations without the officer having to hastily determine which buttons and switches to activate while driving. The vehicle is also equipped with Setina Manufacturing 1/2 cage and weapons mounts, Gamber-Johnson console and equipment tray, American Aluminum EZ UP vault. WatchGuard Video camera system.

Slate Belt Regional Police Start PAL program. - The Slate Belt PAL will supplement and strengthen youth sports programs already in plce and offer new options for youth not already engaged by offering leadership training, mentoring, day camps at our many natural attractions, free and low cost events throughout the region and opportunities in the arts and sciences. You can follow Slate Belt PAL Facebook: https://www.facebook.com/slatebeltpal/

Allentown Police have received a PennDOT grant to "to increase pedestrian safety. You may have noticed increased enforcement and education, particularly at busy intersections and areas throughout the City. This is an ongoing effort to increase the safety of our residents and visitors when it comes to driving and walking. Your safety is important to us!"

A reader responded with a complaint about "the craziness of the HS and Middle School children that think that a car can stop on a dime because they think it is funny to step out into traffic..particularly in bad weather. It is a real problem and I am truly shocked that no one has been seriously injured."

These kids are immature and acting the way kids act. Growing up, I knew one kid who would run into a car and lie on the ground pretending he was out cold. The upset driver would stop and get out, and then he'd open his eyes and shout, "No car can kill me!" and run off.

We all would laugh, but I doubt we'd still be laughing if a child was hurt.

I guess what I'm saying is no cop can make a kid mature. Only time does that.

I do a lot of walking lately, and on Saturday, a lot of people visited Nazareth for the Halloween parade. Though there were a lot of pedestrians, people still drove like maniacs. These people are supposedly mature.

Nazareth Police Department announces that DA John Morganelli is visiting the neighborhood watch meeting on Thursday, October 26, 6 pm, at Borough Council chambers. If you want to complain about me, now's your chance.

Upper Macungie Police warn of diversion burglaries. - On October 13, a resident in the 5000 block of Snowdrift Road reported a residential burglary that occurred around 7 pm. Details are as follows:

This is the second "distraction" style burglary that has occurred in Upper Macungie since October 5th. The first incident occurred in the 5000 block of Oakview Drive, and the suspect(s) used a similar story to create a diversion.

This case is currently under investigation by UMTPD detectives, however, we need your help. We ask that residents take the time to share this information with relatives, neighbors, and friends. This type of criminal targets the elderly- so it is vital that we get the word out (spoken word, not just email or social media sharing) not only in Upper Macungie, but throughout the Lehigh Valley. Remind them that they should always ask questions when approached by someone they don't know, and that they shouldn't hesitate to contact the police if they feel the situation is suspicious. Lastly, there is nothing wrong with simply not answering the door if you don't recognize the person on the other end.