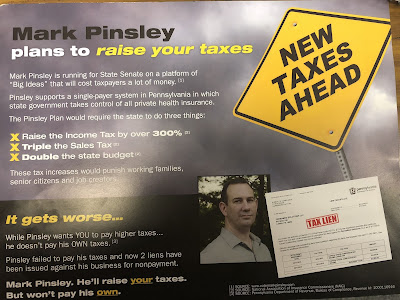 Mark Pinsley wants very much to be a State Senator. He wants it so badly he announced his candidacy before being sworn into office as a South Whitehall Township Commissioner. He may have needed a head start because he's running against Pat Browne. He chairs the Appropriations Committee and is one of the most powerful officials in Harrisburg. A close ally of former Congressman Charlie Dent, Browne is known for his moderate views. Pinsley by contrast is on the fringes of the Democratic party. But a recent Browne flyer attacking Pinsley for unpaid corporate tax liens was a mistake. It was an honest mistake, but it was a mistake.

That flyer hit mailboxes last week. "Mark Pinsley. He'll raise your taxes. But won't pay his own." The flyer includes an excerpt from a Pa. Department of Revenue tax certificate showing that Pinsley is delinquent on taxes owed by one of his companies, DermaMed Solutions, LLC.

On the day this flyer hit, Pinsley called a news conference and strongly denied that he was behind on any taxes. He called on Senator Browne to retract his accusation, and threatened to sue.

Pinsley made good on that threat on Monday, and sued Browne in Lehigh County court on a defamation/false light theory. He is represented by Allentown Attorney Matthew Mobilio.

That's a lot of DermaMed.

All these DermaMeds apparently confused a Revenue employee who prepared the tax lien certificate. As a result, a taxlien ceryificate was erroneously issued,naming Pinsley as a debtor for taxes that have no application to his business.

Last night, the Pat Browne for Senate campaign responded following the issuance of a statement by the Pennsylvania Department of Revenue indicating the department’s error in issuing a tax lien notice against the company owned by Mark Pinsley:

“The Pat Browne for Senate campaign relied on public information regarding tax liens issued against Pennsylvania businesses, which was obtainable through the Pennsylvania Department of Revenue and its authorized personnel responsible for responding to public requests for such information.

“Following the Department of Revenue’s recognition of its error, the Pat Browne for Senate Campaign is taking the proper steps to respond to this acknowledgement accordingly and expeditiously.”

In the course of doing my own research, I saw a taxlien against DermaMedin Delaware County for a small sum, which was satisfied this year. The Pinsley campaign tells me that's the other DermaMed.

In review of the Dept of State website, there is nothing confusing about two distinct addresses in different counties. What address was listed on the "original" paper?

Christ O'Hare can you bend over any more in defending Browne and his bullshit? The guy f!@#ed up and he should be accountable. He went in the mud and it got on him. Even Channel 69 said they by law must run the BS ad until the campaign tells them to stop and the campaign has not. So Browne is a douchebag and so are you for making it sound like some simple mistake!

I've done some research and I think I found the problem.

Seriously though, isn't this the reason new companies are supposed to do fictitious name searches before they get set up?

And isn't it wise for existing companies to pursue legal action against new companies trying to set up shop under similar name(s).

Did any of these DermaMed companies follow proper procedure when they were set up?

I found DermaSynaMedGro. It just looks like a lot of shit.

I am sure they were set up properly, but the plethora of companies using the same name made thing confusing.

3:06, I am by no means defending Browne. I am pointing out that he made a mistake and why.

I doubt the ads will continue. If they do, then he should be slammed.

Pensly sounds like some kind of scammer with that many companies. Is he money laundering or what?

"I am sure they were set up properly, but the plethora of companies using the same name made thing confusing."

Any competent attorney will perform a fictitious name search when setting up a company to make sure there are no other companies with that name. Similarly, they will register the name of the company they are setting up so that others are not able to use the same (or similar) names. If an existing company has the name a new company wants to use, it must sign off on having that name used (with a Consent to Appropriation of Name form).

That prevents these types of mistakes from happening, and also prevents unscrupulous operators from trying to deceive the public by using names similar to existing companies. There are other steps necessary to protect your name, but it all starts with that.

There are reasons beyond mistakes in political mailers for companies to have clear and distinct names.

So has the Deptartment of revenue employee been fired???

I have no idea. In my lifetime, doing title searches, I know there are occasions when an erroneous tax cert. is provided. I imagine that if it happens frequently, the person responsible is terminated. In my business, the tax lien certificate usually indicates a property isclear when there are, in fact, taxes. The taxes must still be paid, notwithstanding the error.

The very idea that someone as sophisticated in accounting and business matters as Pat Browne could make this error, tells me it was not an error. Pat did this mudslinging on purpose, and he got caught.

I hope Pat loses his race to Mark Pinsley. Mark deserves this win!

If you are unable to post without being insulting, do us all a favor and don't post bc I will delete you.

If you insult me, as you did, I have no obligation to host your garbage. I will delete every comment you make about your point, with or without an insult, to make sure you understand.