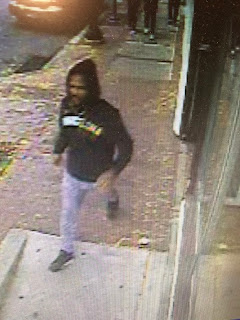 Theft From Vehicle and Fraudulent Use of Credit Card. - On Tuesday October 9, 2018 at 1352hrs Lower Saucon Police took a report of a theft from a motor vehicle at Maxx Fitness in the Saucon Square Shopping Center on Rte#378. The victim reported an unknown actor(s) smashed the passenger window of her vehicle and removed a purse. The purse contained a driver license, debit card and a credit card.

The pictured male fraudulently used a credit card belonging to the victim at the Villa clothing store at 1 W 4th Street Bethlehem, Pa to purchase 2 pair of Nike Airmax and 1 pair of green Air Jordan sneakers valued at $459.96. 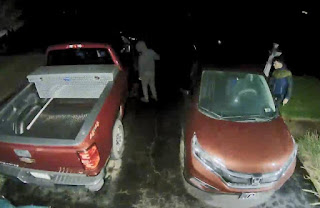 Car break-ins in Hanover Tp. - Car break-ins again have been occurring over the last week in the township, primarily on Blair and Greenfield. All residents are urged to lock their car doors and make sure that their garage doors are down and secured. If anyone can identify the below persons, please contact Colonial Regional Police Department at 610-861-4820.

One surveillance photo reveals that two actors are involved.

Theft from vehicles reported in Brookfield Cir/Village Walk Dr area. - Macungie Police have received several calls about thefts from UNLOCKED vehicles in the Brookfield Circle and Village Walk Dr areas of the borough. The thefts occurred between Thursday, Oct 11 and early morning hours of Friday, Oct 12. Patrol units were dispatched to the area overnight but were unable to locate a suspect(s).

The reports we have taken all indicate the vehicles entered were UNLOCKED. The easiest way to prevent yourself from becoming a victim is to simply lock your car when not using it. Additionally it is a good idea to remove all valuables from in the cabin area.

If a resident has seen anything suspicious over night please contact Macungie Police at (610) 966-2222.

Criminal Mischief: Two 13 year old males from Emmaus were charged with Criminal Mischief on 10/1/18 after they damaged tires totaling $1,180.92 on 3 vehicles. Charges filed with Lehigh County Juvenile Court. A 3rd 13 year old male will be admitted into a juvenile diversion program at the Impact Project for his involvement in the incidents.

Theft: reported on 9/26/18 in the unit block of N 6th Street. Actor removed a collectable action figure valued at $50 from the victim’s garage.

Harassment: Fatima Huaman Ataski, 25, of Allentown was arrested for Harassment on 9/27 following a dispute in the 1300 block of Chestnut Street. A citation was filed at the Magistrate’s office.

Theater arts people do have useless degrees. It does not seem fair to conclude that they are the ones responsible for all these crimes. Why do police consistently say they are seeking unknown "actors". It is discriminatory against thespians.