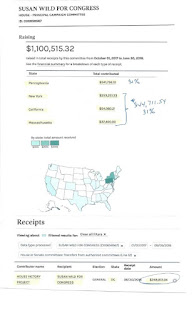 Dean Browning, darling of the local tea party, came up short against Marty Nothstein in capturing the GOP nomination in the PA-7 race. But he still recently slammed Democratic nominee Susan Wild over her fundraising:

Browning: "One of the things that is most irritating about liberal politicians like Susan Wild is their hypocrisy and double standards. A case in point is Wild's most recent "Saturday with Susan" post on Facebook. In her video, Wild says she believes it is "incredibly important" to reduce the role of "big money" in politics. Wild says she will push for campaign finance reform once she is elected and will work to eliminate the role of PAC's.

"Wild fails to mention in her video that $383,263 or 35% of her donations have come from PAC's and Committees including $249,813 from just one PAC that is based in Washington! Wild also takes a swipe at Marty Nothstein for receiving money from PAC's that may have items that could come before Congress. In doing so, Wild ignores the fact that she has taken money from PACs for Planned Parenthood and the National Education Association. Want to take a guess as to how Wild would vote on continuing funding for Planned Parenthood or on supporting school choice?

"Wild says she wants to increase the role of small donors at the grassroots level. Meanwhile only 31% of the money Wild has raised has come from individual donors who live in Pennsylvania. Actually, Wild has received more money in total from donors in California, Massachusetts and New York than she has from donors in Pennsylvania. That's because Wild's policies are better suited for San Francisco, Boston and New York City than they are for Slatington, Bangor and Nazareth.

"If you don't want another politician in Washington who has a different set of rules for themselves than they do for us and who says one thing while doing another, then you need to vote for Marty Nothstein on November 6th."

Wild responded, not on the merits, but with an ad hominem: "Gee, Dean, maybe you should tell folks about how you called me after the primary and offered me your “opposition research” on Marty (which I declined).".

I made similar arguments concerning Wild in the primary. This argument, though correct, has no appeal. Wild probably should have ignored Dean.
Posted by Bernie O'Hare at 10/01/2018 10:38:00 AM

Email ThisBlogThis!Share to TwitterShare to FacebookShare to Pinterest
Labels: pa-7

Libertarian Tim Silfies must be above all this shady PAC funding as he and his funding was not mentioned.

Good thing there's an alternative to the two candidates each of which have promised to screw at least half of us.

11:43, You are disgusting and I know no responsible person who would want to be within a mile of you.

You can see who has donated to each campaign at the links below. Silfies doesn't have any receipts from PACs. Wild and Nothstein both do.

Remember when all politics was local, per Tip O'Neill?

Bases on where the funding comes from, it's clear, in politics, there is no such thing as a local election.

Browning wants to set himself up for his political future. The guy comes off as unhinged.

I would argue that Wild's reply, while not rebutting Browning's accusation, was directly relevant to Browning's "hypocrisy" claim and not, as Bernie charges, an ad hominem personal attack.

Send Wild packing to California. Her kind have ruined that state and that wooshing sounds you hear are the Californians leaving before they are taxed to death. My cousin was visiting in one of the big cities this year and his car was broken into. The cops refused to come out stating they don't have enough manpower to respond as cars are repeatedly targeted. Out of state cars are prime targets as the crooks know the owners have to return home and California does not follow thru. That means all of our premiums will go up for these claims. We should get a "Go Fund Me" started to help her move to her real constituents. After all, that's where her money is coming from.

Wild made her living defending big corporations, even against child abuse. We understand that is her job, but the hypocrisy of trying to come off as for the little guy is a joke. Now she is trying to hide her positions from the primary. She should step up and be honest with the citizens of the district. Let the voters know what she wants to do and let the voters decide.

”I would argue that Wild's reply, while not rebutting Browning's accusation, was directly relevant to Browning's "hypocrisy" claim and not, as Bernie charges, an ad hominem personal attack.”

Of course you would.

Dammed if you do dammed if you don't? Bernie this left right shit slinging contest is becoming very tiresome and old.
I had liked your comment of leaning left on some and right on others, as long as the letter of the law is the ultimate goal. The left of the goal post is under the bleachers down in back.

So Wilde goes after Browning. I would suggest he continue to bait her. She appears unhinged.

WE know you hate Wild, she beat your mancrush Morganelli. Browning is a political ass, trying to bait her. She owes him no answer to his question. How about this one Deano, Where does Nothstein stand on 'Boffing' Kavanagh?

NEVER WILD and her socialist agenda

I am deleting comments from Tricia Mezzacappa, who is psting anonymously and with fake names.

I think its unfair to call Dean Browning the "darling of the TEA Party". Dean's support base is much wider than this accusation would warrant. While the TEA Party might get a 100 or so members at a meeting, Dean very nearly won the Republican primary over a household name (Nothstein) who had the support of the local Republican Party. I would also argue that your "darling of the TEA Party" would beat Wild if he was the nominee because Dean would pull in many Democrat votes in the general election. I really like Browning's message and I don't know squat about the TEA Party.

It is both fair and accurate. Dean has been on the executive board for several years, and attends many of their meetings. He began his shift to the right a few years ago. He has always been a fiscal conservative, but it surprised me when he supported Ted Cruz in the presidential primary. Cruz is a social conservative who even opposes same sex civil unions. According to what Dean tells me, about 150-500 attend monthly meetings, depending on the agenda. I don't know that Dean would win and doubt any R except Charlie Dent would beat Wild. Dean would run a negative (not personal) campaign, which I think could work under different circumstances.

Although not entirely responsive to Browning's question, her reply is quite revealing as it shows two representatives of diametrically opposing ideologies willing to share opposition research in private.

The voters should know there's not a dime's worth of difference between any "D" or "R" and vote accordingly.

Your comment assumes that Wild is being honest. I know she lied to John Morganelli and she is either lying about Dean or distorting what he said.

So she lied about conducting a positive campaign? Politics ain't beanbags, as you no doubt heard. As politicians go, this is minor.

I'd like you to run something, anything, positive about any politicians running in this race. After all, writing positive things about Morganelli does no one any good because he's not running. I support Susan Wild because she will fight for campaign finance reform as well as other common sense reforms, unlike either of her opponents. Now it's your turn, Bernie....

No one should be so irresponsible as to assume a politician is honest.

The assumption is based on Browning's lack of denial.

I cannot tell from the article if browning refuted her statement? Although it's hard to imagine him not, if what she's saying is false.

He told me she distorted what he told her. He and I have some deep differences, but he has always been honest with me.