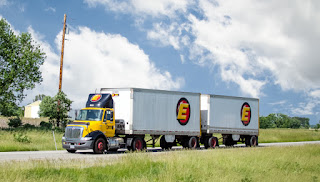 Yesterday, I told you that several Northampton County municipalities have joined forces with a multi-municipal plan. Brien Kocher, the Chair of Bushkill Township's Board of Supervisors, likens it to having a home in a neighborhood. Nobody tells you what to do inside your home, but you have an opportunity to work with your neighbors on goals that are in your mutual interest. He chairs the steering committee of a plan that encompasses the boroughs of Bath, Nazareth, Stockertown, and Tatamy; as well as Bushkill, Lower Nazareth, Moore and Upper Nazareth Townships. On Tuesday, Hanover Township voted to join this neighborhood.

There's a similar multi-municipal comprehensive plan in southwesterm Lehigh County. It includes Alburtis, Emmaus and Macungie Boroughs as well as Lower Milford, Lower Macungie and Upper Milford Townships. This regionalism empowers municipalities to join forces and combat truck traffic, congestion and warehouses. Affected municipalities can assess impact fees based on the adverse effects of a warehouse development, giving them the money needed to keep roads in good repair. And so long as a use is permitted in one municipality, it can be banned in the others. This enables community leaders to steer warehouse development near major highways, where they are more appropriate.

Unfortunately, once you get on that Interstate, you may soon be seeing a different kind of truck. Segments of the transportation industry are pressuring Congress to allow 33-foot doubles and 90,000 lb.gross vehicle weight as part of the next appropriations bill. The argument for these increases, expressed by Americans for Modern Transportation, is that bigger and heavier trucks will result in fewer of them. But Advocates For Highway and Auto Safety dispute this argument, noting that the increased stopping time for these larger trucks will mean more rear-end collisions. to control :

At their July 19 meeting, Northampton County Council unanimously adopted a resolution opposing any increases in the size of trucks. According to the resolution,
* double-trailer trucks have an 11% higher fatal crash rate than single-trailer trucks.
* Heavier and longer trucks will be more difficult.
* Pennsylvania has the second highest number of structurally deficient bridges in the country.
* Increases in the size and weights of trucks would damage the infrastructure in cities, boroughs and townships. They would have to pay for the repairs to roadways, making these wide loads an unfunded mandate.
Posted by Bernie O'Hare at 7/26/2018 12:11:00 AM

What an empty waste of time! A non-binding resolution to make the Democrats feel good. Next, they will want participation trophies for their council cubicles. The county owns no roads, and most heavy truck traffic is on state roads and bridges. And yeah, let's feel sorry for townships that welcomed warehouses and their tax revenue with open arms. Just more useless posturing by a Democrat council that is full of themselves.

I believe the weights and number of wheels/trailers are decided by Harrisburg, not the counties. If counties regulated trucks, there would be ciaos on the highway as a truck could not pass through one country to get to another.

I agree with 12:49am. This is more of a political statement than anything else.

I have not suggested that counties should make this call.I have reported on what NorCo has urged the federal government to do. And it is the federal government,not the states.that decides what happens on their highways. But I find it quote interesting that a so-called conservative would advocate against local control over a health and safety issue in favor of the deep state.hat's bc you'renot really a conservative, but a lemming for Trump.

Oh I am sure that when they see a letter with "Pocketbook Piggy Peg's" on it they will jump to attention... a waste of paper and ink-

The major roads in the Lehigh Valley are already too dangerous. Weekly, if not more often, major accidents occur. People traveling in a regular car are endangered by tractor trailiers often driven by distracted drivers, weaving on the road, or barreling down on the downhills to have the momentum to get up the next hill. With the heavy traffic there is no way that even good drivers can be fully in control of the trucks that the truck lobby is pushing for, that is simply physics. In remote areas, with minimal traffic, it presents a lesser danger to the public. Since we have no passenger trains, we must have a safe way to travel, and extra heavy and long double trailers endanger lives of motorists.

10:03 If the United States had the same interstate road construction standards as exists in Western Europe, truck weights could be much higher without damaging road surfaces. Triple container trucks are common sights in western states as well.

This conservative actually supports roll-on, roll-off railhead terminals for over the road hauling of > 1000 miles to eliminate the need for triple length trucks on the Interstate Systems. It is the Federal Government's job to regulate interstate commerce.

2:27pm The reason 22 in particular is dangerous is that it was designed and built in the early 1950s and it's never been expanded to address the much higher population and buisness community over the past 60 years. It's why I-78 was built south of Allentown, Bethlehem and Easton was 22 did not meet federal interstate standards. The cost of widening 22 to 8 lanes, which is what is really needed, is unaffordable.

This is one of many that can be found on youtube regarding European highways being safer:

Should have thought about this before they let these concrete blobs be built that they can't get workers for and that are wrecking our once beautiful area. Soon it will look like NY/NJ were the transplant left. Imagine that!

the Governor Wolf signed a law last month allowing trucks on all roads in the commonwealth of Pennsylvania unless a $250,000 engineering study is done on each section of road to be posted....

fits the Federal model of protections afforded to the trucking community


http://www.mcall.com/news/traffic/road-warrior/mc-nws-road-warrior-free-range-trucks-20180418-story.html - THIS WAS PASSED AND SIGNED INTO LAW.... lol