Fox Calls Benol Out For Hypocrisy 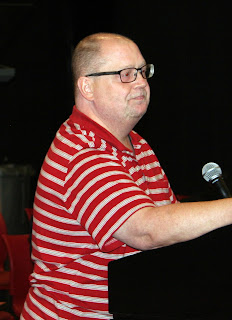 Controller Steve Barron has suggest tighter internal controls over travel by county staffers. He also noted that the amount of money spent on "training" in Human Resources has skyrocketed. It's about ten times what it was before Brown took office. In what seems like a choreographed response to Barron, Executive John Brown used most of Council's Thursday night meeting to bash Barron. First, he had Trapp take the podium to explain that he's saved a million dollars in workers compensation costs, although the truth is that those savings actually began under Executive John Stoffa. Then he had Corrections Director Dan Keen come up and talk about active shooters and other problems that can happen at jails,even though Barron never questioned the money spent on training in Corrections. Finally, Mat Benol unleashed a vicious personal attack on Barron, claiming the position should be defunded. He even called Barron "corrupt," based on his incorrect assumption that Barron had personally profited from the use of an autodialer in John Morganelli's AG race.

Slate Belt resident Jeff Fox is a conservative who backed Hayden Phillips in the Controller's race against Barron. I doubt that he sees eye-to-eye with Barron on many things. But he saw through the nonsense spewed on Thursday night, and sent the letter below to Benol,with copies to every Council member.

After reading and viewing the meeting of 5/4/17, I do have a few comments.

In my humble opinion, it seems that you are the one being extremely partisan. Your role on council, once elected, should be about issues and policies which serve the county and its' citizens, taxpayers, well. You work for all. Not just R's. Saving money is saving money. The controller position is an important one, especially for the taxpaying citizens of Northampton County. Defunding this position, even if legal, is not even a reasonable suggestion. The controller is doing his job. Council, including you, should do theirs.

According to the article posted on Lehigh Valley Live by John Best, you said..."... Barron should have sat down with the HR department and discussed how the money was spent before sending a memo out with accusations of abuse and overspending."... Did you sit down with Mr. Barron to discuss these issues as you suggested Mr. Barron should have done? Do as I say not as I do? You publicly attacked Mr. Barron for doing his job. Did you speak to him, man to man, before you did so publicly? Who is politically motivated? Enough with the politics! Grow up and remember for whom you work. This is just one example of many which have prompted me to leave the republican party after 30+ years. Too much petty party partisan politics which interfere with what is in the best interest of We the People!

Amen Mr. Fox! I could not have said it better myself!

Thank you, Mr. Fox. Did you ever thinking of running for County Executive or at least County Council? There will be an opening and not soon enough for both!

Excellent commentary Mr. Fox. Most of the politically informed citizens of NC feel the same way you do. Political partisan voters installed this current crop of useless council people and administration, and it is our duty to sweep this vermin from office. Voter apathy is not an excuse! These maggots must be sent on their way.

You don't help things when you call people "maggots" and speak in terms that are themselves politically partisan. Knock it off or identify yourself.

It's true Hayden Phillips raised our county real estate taxes! It proved to be unnecessary later on! Vote him out too!

The increase was result of several factors your hating brain doesn't understand. Glen Reibman's swaption folly, mismanagement and the bungled sale of Gracedale by the previous administration as well as rising pension and benefit obligations drained much of the surplus. With all of that, county property taxes have gone up 9% over the past 10 years. That's much less than any school district and most municipalities in the county.

"The increase was result of several factors your hating brain doesn't understand."

The increased..blah..blah..blah..yada...yada..yada... Notice how the tea party folks have all the excuses in they world when they run as no taxers and then raise your taxes by 10%. It was this ones fault then that ones fault,etc.. If you want to keep drinking their icetea go right ahead.

Where did they dig this guy up? So since Barron didn't follow the rules that means council has to have a sit down with Barron? For what? To make him follow the rules? I don't understand any of this. Someone please explain why he is questioning the spending? Is it not true that each department has a budget that is voted on by council? If the department is spending their budget and not exceeding that budget, what is the scandal?

What's the scandal? Are you a maroon? So the department has a budget approved and they decide to use it to lease a new Cadillac for the director and deputy? Or to rent out Blue one night for a party? Or to have their offices redecorated with Victorian furniture? There are line items within budgets and even the most flagrant department like HR has to use discretion, common sense, and an appreciation for precious taxpayer dollars in how they spend this money. Council should demand that the HR budget for training be zeroed out because of these phoney junkets.

Or buy an $800 popcorn machine? Or have a filing cabinet painted so it matches the wall? Or have several lunches at the courthouse on the taxpayer?