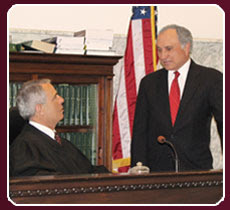 State Rep. Richard Grucela has long advocated a bill to allow 17-year-olds to register and vote in primary elections in Pennsylvania so long as they are 18 by the time of that year’s general election. His bill (H.B. 259) finally made it through the State Government Committee yesterday.

"Young Americans came out in record numbers to vote in the 2008 presidential election because they care about their country and their future," said Grucela, D-Northampton. "My legislation would encourage a demographic typically expected to sit at home on Election Day to stay informed on the issues and vote. It just doesn’t make any sense to bar someone from fully participating in the election process simply because their birthday is a few months shy of the primary date."

Grucela is a former teacher at Easton High School and a member of the House Education Committee who will be stepping down this year from a seat he's held since 1999.
Posted by Bernie O'Hare at 3/09/2010 12:04:00 AM

Enjoy your pensions Rich. Those 17-year olds will be carrying you for a long time. And no more having to answer to those despicable, do-nothing constituents of yours. His leaving can't come soon enough.

This is a great idea. Rich should be commended. Anything that gets young people motivated for vote is a good thing!

The 3 am blog troll strikes at 12:21. Seriously so what if Rich gets 50 pensions. This is a good idea and he should be commended.

Hell, we let WWF Wrestling fans vote, why not the inmates at Allentown State Hospital? Better yet, let all the imaginary people in some Blogger's heads vote as well.

Seriously, let the kids vote. It's a good practice and the sooner we get them involved in the process the better.

I worked when I was 16, paying taxes to the state, feds and local gov't. Yet, I couldn't vote. It was a classic case of taxation without representation. Likewise, I was educated about current affairs and even paid attention to elections, sitting with my parents to research candidates.

I say anybody under 18 who is working and paying taxes should be allowed a say in their representation. If their tax dollars are good enough, so are their votes.

People under 18 rarely have tax liability. If it's withheld, they get it back.

This is an absolutely horrible idea, no surprise that it comes from the public trough multi-feeder. What we do not need is more inexperienced and immature people making kneejerk decisions based on feel good speeches about the solution to everything is just making sure we "invest", climate change, free healthcare, or because the candidate is cool.

Get them while they're young, before they understand how hard they will have to work for everything you will promise them will be free.

9:42, I never got back my taxes on Social Security, Medicare or on state or local income taxes. I paid taxes. You have also posed a situation in which anybody who receives a refund check from the IRS would be excluded from voting. That sounds like an attempt to exclude people from democracy based on economic means.

Nobody requires anybody over 18 to pass a maturity test in this great country. There is no better civic lesson than to afford somebody the right to vote.

12:24 am if Rich could get 50 pensions, he'd be working on #49, and bringing hif teacher buddies along for the trough feeding. Scags or Emrick take your pick. And no im not ditinger

If you are too stupid, as you obviously are, to differentiate between PIGPEN and IRONPIGPEN --- what else do you have no clue about?

The rest of the world?

I didn't say that at all, and you know it. Where did I say a tax refund should specifically excludes someone. Moreover, you can get a refund and still pay taxes. Refunds are made for overpayment more than for no liability at all.

My point was that payroll taxes are not, in and of themselves, a reason to grant the vote. On that subject, better that they not be taxed at all, respecting the fact that they do not have full adult rights.

But we could go the other way, do away with the age of majority altogether. Put children on equal footing with adults. Then we can tax the piggy banks, the savings bonds, the lemonade stands, the paper routes, everything. And then we can get rid of the juvenile justice apparatus. And then we can let them choose whether or not to go to school. And they can drive as soon as they can reach the pedal and turn the key.

Why do you think we don't do that?

And my point is that if people are being taxed then they should be able to determine the basis of their representation. Obviously there are some exceptions (convicted felons and such who squandered their rights), but since most states don't allow minors to work outside of the family business until they are 16 or so, this is likely to only apply to the age of 16 (I don't know the exact law, so please give me some flexiblity with this point). Think of the message we currently send. Basically, we are telling them that they are capable of working, paying for their part in society but not having a say. You stated above very clearly that they have no tax liability and I countered with a point that they do in fact have a tax liability. Units of gov't are getting their pay check with-holdings when they are legally allowed to work. Since we rightly don't tax piggy banks, lemonade stands and such, your comments on that matter are irrelevant to the conversation, but a nice distraction nonetheless. If maturity is the question, then perhaps you might be in favor of raising the working age to 18? That would certainly be consistent.

You can disagree with my point about taxation and representation, but it is a disagreement on values. I happen to believe that the moment somebody is taxed, they should have a voice in our democracy until due process deprives them of this right. Didn't the Declaration of Independance have some language about this matter?

It seems your concern is how a 17 year old might determine how he/she votes. My guess is that it would be no different than the process that any other voter might employ. We certainly don't place restrictions on how people vote based on their decision making. It is their vote. They exercise that right (or not) as they deem appropriate.

And please, for the integrity of this conversation, would you be kind enough to sign your name.

They can vote at 17. They can die for our freedom at 18. But they can't legally consume a beer until 21.

I agree with the voting right. Would Rich begrudge a 19-year old Afghanistan veteran celebrating his or her safe return with a legal beer?

It seems rather ridiculous. If one is not old enough in the eyes of the law to responsibly consume - or choose not to consume - alcohol, what makes us think they are responsible enough to vote?

Our laws make no sense and Rich has done a great deal to contribute to the nonsensicalness. Again, what about that vet's beer?

Dumb idea. Most 17 year olds barely demonstrate the maturity to complete an education. Just another way for the the most charismatic, free-spending, deceitful liberal candidates to add more sheep to their flock.