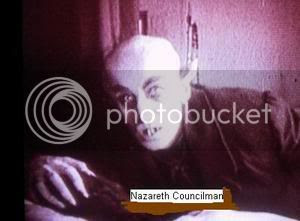 Are the Lehigh Valley's government officials vampires? I ask this because they shrink from the Sunshine Act. Let's look at some very recent examples. In Northampton County, Lamont McClure (a lawyer who I only see at night) chaired a Law & Order committee hearing that violated the Sunshine Act. When I dared point it out, I was besieged by a litany of threats until Lamont's own Solicitor and Morning Call columnist Bill White told him to exercise his Fifth Amendment right to remain silent. While I was doing the Tango with Lamont, a Fountain Hill Council Committee was also meeting behind closed doors with a hospital (were they looking for plasma?) until The Express Times found out and showed its wooden stake.

But these violations pale in the face of what goes on in the land of Nazareth. This is the land where Count, I mean Councilman, Stoudt once canceled a police committee meeting rather than let two reporters inside. Way to go, Stoudt! Most recently, he arrogantly asserted one evening that nothing would ever get done if Council involved the public. As a result, decisions about controversial issues are always made behind closed doors. They have the wisdom of most decisions made in the dark.

Want some examples? There's a civil war cannon in Nazareth circle that probably doesn't mean much to you, but matters a lot to some Nazareth residents. Borough officials wanted to move it out of the circle for reasons that defy logic. Maybe it fires silver bullets. When the public found out, it went ballistic, and exploded as loudly as that cannon ever roared. Council shrunk into the mist.

Same thing with the new government center. Once before, about six years ago, they wanted to build a new government center. Guess where? Yep, the same spot that's under consideration now - a neighborhood park where children play baseball and other games. The cannon roared again and borough officials backed off. But now they're at it again, operating in darkness as usual.

In most municipalities, the Solicitor is usually the voice of reason and will always err on the side of including the public, especially on matters of public interest. But not in the land of Nazareth. Solicitor Al "Renfield" Pierce concludes every thing that committees do is "administrative action," and thus exempt from the Sunshine Act.

I got news for you, Al. You're wrong! "Administrative action" is limited to execution of policies previously decided at an open meeting. That's not what happened when committees got together behind closed doors to decide again to foist a new government center on unsuspecting citizens, and smack dab in the middle of a park. No siree. At least three members of Council were totally in the dark, so those committees could not have been executing policies previously agreed in an open meeting. And these committees actually hired an architect to draw plans for this one and only option. A minority of Council can order architectural drawings? And no other choices? Take it or leave it, baby. That's not "administrative action." That's official action behind closed doors. And the option under consideration will cost around $3 million, enough to suck the blood from every Nazareth resident who operates in the open.

So that's why I hand-delivered the letter below to borough officials Monday. I did it during the hot noonday sun, while they slept. And in the evening, I've got cloves of garlic around my neck and a few crucifixes in my pockets. But now my windows are rattling. Gotta' go. Where's Buffy?
To: All members of Nazareth Borough Council; Hon. Earl Keller, Mayor; and Alfred Pierce, Esq.

I am a Nazareth resident. At Borough Council's meeting on July 10, 2006, it became quite clear that you have participated in repeated violations of the Sunshine Act for years. This is because you mistakenly believe the Act only applies to meetings at which a quorum of Council is present. As a result, council Committees have been meeting behind closed doors, without public advertising or notice.

As long ago as March 2000, you conducted private committee hearings to decide what to do about a civil war cannon at Nazareth's circle. Most recently, two committees met behind closed doors to decide on a municipal building expansion. Those committees ultimately merged into a single committee that authorized an architect to prepare plans for a new government center at Nazareth Hall Park

As you will all acknowledge, Nazareth Borough Council is an "agency" as that term is defined in the Sunshine Act. But an "agency" is also defined to include committees "authorized by the [Council] to take official action or render advice on matters of agency business ... ." Thus, the committees that met to consider options for a municipal building expansion are subject to the Sunshine Act. Their recommendations and the decision to hire an architect all constitute "official action" as that term is defined by the Sunshine Act.

Your basic misunderstanding is you think you only need to follow the Sunshine Act at your regularly scheduled meetings. But it applies to committees as well, and it certainly applies to a committee considering something as controversial and important as a new government center. Meeting in private to discuss this matter of public interest betrays both distrust and disrespect to the citizens you serve. In fact, Councilman Stoudt had the arrogance to tell one newspaper, "if officials had to alert the public every time a couple of them got together, no business would ever get accomplished." This statement reveals an antipathy both to the letter and spirit of the Sunshine Act. It is a matter of public policy that citizens have the right to attend and be heard at meetings in which official action is considered. The Sunshine Act itself states that "secrecy in public affairs undermines the faith of the public in government and the public's effectiveness in fulfilling its role in a democratic society." In short, democracy dies behind closed doors.

As your Solicitor can inform you, I have 30 days from the date of discovery of a Sunshine Act violation within which to seek a legal remedy. I have no wish to do so, but am extremely disturbed by your systemic exclusion of the people you serve from matters that affect them directly.

To avoid litigation, I am asking that you make the following commitments before August 9:

1. You must agree that ALL future meetings of Council and its committees will be conducted in compliance with the Sunshine Act, i.e. committee hearings will be publicly advertised and open to the public;

2. You must reschedule every Committee hearing at which any official action was taken concerning the new government center, including the decision to hire an architect to prepare plans for a municipal expansion at Nazareth Hall Park, and conduct new hearings with public notice and public participation;

3. You must table any further consideration of a municipal building expansion until the committee has conducted one or more meetings that comply with the Sunshine Act, and that gives the public an opportunity to discuss options in addition to the sacrifice of Nazareth Hall Park.

Thanking you, I am

Would you loke to borrow a set of my body armor? I had a priest bless it!

Dude... Billy just called you a Nazi! You are marked.

As for the sunshine concerns, I think the problem stems from the fact that too many of our local gov't officials are not school in the area of open meetings. For the average Joe, dealing with mobs of people can be a bit intimidating. And reporters have made many council members look silly, so I can understand that they are hesitant to have the reporters around. Think about it Bernie: do you want the guy who sent you running down the street in all your natural glory to be hanging around your kitchen eating your Wheaties? No, you want him as far away as possible.

While I can sympathize with the local officials, I've interacted with enough to know that you can't shy away from the sunshine b/c that's when the reporters and the mobs know they got you cornered. If in doubt, stay in the sunshine.

To LVDem, I think attitude goes a long way in determining how an official reacts. If he as an attitude like Councilman Stoudt's, look for repeated Sunshine Act violations. This is something I'll be sure to think about if this guy has the guts to sseek re-election. Also, Al Pierce is giving them terrible advice. He looks fopr reasons to exclude the publ;ic, which defeats the purpose of the Act.

To LVDem, As far as being called a Nazi concerned, I'm really not sure where the catcall was directed.

Bernie,
I have some garden stakes in the garage you can take to the next borough meeting. What time is it ,midnight? Also, I don't remember Nosferatu, Dracula, or any other of the undead ever being on the ballot. Maybe you could get Quentin Tarantino or George Clooney to drop by, and prompt an off the cuff shooting of the new movie, "From Dusk til Dawn II"

To Anon: It's too late for me. I noticed two strange marks on my neck this morning while shaving. And now I'm getting strange thoughts telling me that a new government center in a ballfield is a good thing. Did you look at the plans? The new buildings look suspiciously like crypts.

Sounds like you need an Excorcist in Nazareth O'Hare.
From "Buffy the Vampire Slayer" we could have "Bill White,hunter of the Undead". I think there are some possibilities here. If you are becoming a Vampire Bernie, I bet Lamont McClueless would be willing to run a stake through your heart.

Hey DEM, You've got a point.

As for characterizing my comment as catcall, shrill, derisive, or just plain diasapproval, to any Northampton County or Lehigh Valley official whom the shoe of my comment fits, wear it.

1) Bernie, I did not know that you "run down the street in all your natural glory."

2) You should post a picture of your "natural glory" for the rest of us to see and "appreciate."

3) Billy Givens is a TROLL who waits for pre-pubescent girls to proclaim their love for you so that he can take advantage of them.

4) Thank god that you understand what the Sunshine Law means and why regular citizens should be very concerned when it is violated.

5) And to LVDEM: the only way a news reporter can make an elected official look silly is if they GO OUT OF THEIR WAY to encourage ridicule and criticism when they should be fulfilling their duties according to the law.

6) And, Dude, "Average Joes" are not as scared as you think!

To Anon, I've got some bad news for you. I just took a picture of myself in the raw, hoping it might satisfy your curiosity. But my image would not appear on the photograph. And when I looked into a mirror, nothing was there! On the bright side, I can fly! Now excuse me while I go for a little bite.

anon... good point. The dumbasses often times bring it upon themselves.