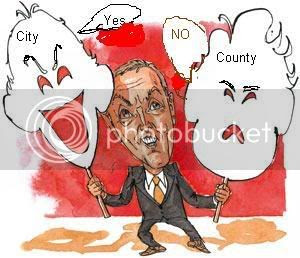 Northampton County's Home Rule Charter is very clear -- it explicitly bars its solicitor from performing legal services for any other municipality. That prohibition had always been interpreted to apply to assistant county solicitors as well. After all, what's bad for the goose should be bad for the gander. And then Glenn Reibman was elected County Executive.

He expanded the solicitor's office with numerous assistants (who paid for their jobs with regular campaign contributions) and it didn't matter whether these lawyers were also municipal solicitors so long as the campaign checks kept coming. Suddenly, the Home Rule Charter was turned on its head. Since it didn't specifically exclude assistant solicitors from working for other municipalities, it must be permitted. Right? I guess it doesn't matter that, when the Home Rule Charter was first adopted, there were no assistant solicitors at all.
Now here's a neat trick. When Northampton County Solicitor Jack Spirk was appointed Bethlehem's Solicitor, all he did was resign his position in Northampton County, only to be immediately reappointed as Assistant County Solicitor. Pretty nifty, huh?

The practice continues today. First Assistant County Solicitor Dave Backenstoe (a real class act, by the way) is also solicitor in Lehigh, Moore, and Plainfield Townships, as well as Hellertown and Walnutport Boroughs. Assistant County Solicitor Chris Spadoni (a good lawyer with a terrific sense of humor)is also Solicitor to Bethlehem's City Council. Although I have no wish to penalize these fine attorneys, Northampton County Council should enact legislation that gradually eliminates this practice.

That's the obvious intent of the Home Rule Charter. “No man can serve two masters: for either he will hate the one, and love the other, or else he will hold to the one, and despise the other.” An attorney who represents both a county and one or more of its municipalities has divided loyalties. And there will be plenty of opportunity for actual conflicts of interest on matters like road improvements, the sale of real estate, the construction and operation of public buildings, litigation, or recreational facilities, to name a few.

I asked the last County Council to adopt legislation to abolish this practice over time. So that no appointee would feel singled out, I suggested the legislation be effective only after the next county executive election. But no action was taken.

So I'll make the same proposal to our new County Council. Are you interested in reform or the old patronage system? Don't you want to prevent the inherent conflict of interest that exists when one lawyer serves two masters? Do you want to eliminate all the expenses incurred when county lawyers have to recuse themselves from a problem that involves a municipality they serve? An ordinance that bars assistant county solicitors from serving other municipalities is simply good government that guarantees honest and independent advice.

Is our Democratically controlled Council any more interested in good government than was the case when Republicans ran the show? What do 'ya say, Lamont McClure? How 'bout you, Charles Dertinger? You both read this blog nearly every day, and I'm forwarding a copy of my request to the Council Clerk.

And what do the rest of you think? I suppose the argument could be made that it's in the county's interest to have an able solicitor who knows municipal law, but we have a lot of lawyers who are well-versed in municipal law and would have no conflicts.
Posted by Bernie O'Hare at 7/17/2006 12:02:00 AM

As a self-confessed agnostic, your allusion to the scriptures shows there still may yet be hope of saving your soul, if not your hide.

As for the county's solicitors, I am less hopeful for their eternal salvation.

James Burke (I believe that's his name), unhesitatingly and unabashedly answered the question elicited from him by Northampton County Counciman Ron Angle.

On the agenda that evening was council's confirmation of the Glenn Reibman-nominated Burke to fill the county's vacant Public Defender slot.

Zito had vacated the position as the Rendell-appointed Court of Common Pleas Judge Jack Panella who had advamced to superior court.

(For those who may not know, Zito then gave up his judgeship to accept his present position, county council solicitor.)

Angle's question to Burke was, "How much did you have to pay for the Public Defender's job?"

Thanks, Billy, for the relevant and succinct observation.

Hi, Bernie, I can't send you an Email from work, but please check out my latest post and give an opinion. I livestreamed you while I was down at the shore, Good Job!
The Redheaded Rednecked assassin!

Here are some latest links to sites where I found some information: http://neveo.info/2017.html or http://google-machine.info/2746.html