In Northampton County, Independence Day Means Some Men Are More Equal Than Others 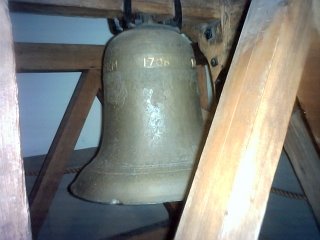 It's that time of year. Independence Day. A day away from the daily grind. A day to work on our tans at the beach, and a night to blow ourselves up with illegal fireworks purchased at the Pennsy/Jersey border. I hear a few going off as I write this piece, and it won't be long before I hear sirens. Not many of us consider the importance of these simple words - "All men are created equal."

Our pols will attend the usual local functions, eating hot dogs, pretending to be patriots, and counting votes. In Nazareth, they'll be rededicating a civil war canon. I hope they don't blow themselves up. They won't give too much thought to these simple words - "All men are created equal."

In 1776, Northampton County's Liberty Bell pealed from the cupola of Northampton County's courthouse. Its iron tongue declared "All men are created equal." Today, this national treasure is both forgotten and unsecured in a lonely hall, while construction workers build wind sensitive fountains for the judges. The Northampton County Declaration of Independence, signed by hundreds of county residents several years ago to commemorate this nation's birthday, lays on its side in another hallway behind discarded courthouse furniture. Meanwhile, our judges sit on their new thrones, which include a $15,000 table that had to be cut in half just to get it in the new Taj Mahal.

A Schantz (Tom or Dan or other? was a member of Northampton County's General Purpose Authority, led by its illegal chairman Glenn Reibman with Blank, Rome, Comisky, and McCauley bond counsel Jeff Blumenthal sitting next to Reibman advising him

One word of advice Blumenfeld gave Reibman was, "Don't allow members from the public attending the meeting to ask any questions."

You, Joe DeRaymond, a Green Party candidate for county council in the 2001 election, county councilman Ron Angle, myself, and others were denied the right to particiate fully in this very public of meeting.

When I called the Northampton County Council's clerk office last week or week before to ask the identity of the "Schantz" whose BethWorks Now Ice Palace has folded financially, no one in that office ever returned my call, though I was promised that the information would be forthcoming.

Now that I see in The Morning Call that a Schantz is an appointed official in the Lehigh County court system, I'm curious as to whether she or any member of Schantz family is related to the GPA-member Schantz or owner(s) of the defunct Ice Palace.

Granted, Israel is a critical and welcome ally of the United State in the Middle East and to our national security. But there also must be a greater recognition, for balance, of the Palestinian and other Islamic states besides just Arabia and Kuwait.

I am not the only one who has voiced this opinion: On the www.billybytes.com website, Joe DeRaymond, now incarcerated in a federal prison for opposing the School of Assassins at Fort Benning, Georgia, expressed the same concerns - commentary for which Joe took a lot of heat from the Jewish community in the so-called Lehigh Valley.

Joe wrote that article sitting in this very room, where I now sit, at this very computer, on which I'm typing this comment.

The date of Joe's article is March 18, 2002, and may be found on the www.billybytes.com website under the category or heading "Global."

The Democrats for America (DFA) are also divided, between those still stubbornly hawkish on the Iraqi War and the followers of DNC chairman Howard Dean and PA Congressman John Murtha, a decorated war hero.

And when I urged the audience to recuit candidates to challenge incumbents like John Callahan, I was threatened with ejection from the meeting.

My Kathy witnessed these star-chamber-like carryings on, as did our Parker Avenue neighbor Cliff O'Hearn and John Todaro's nephew Joe and Joe's companion, who had been a candidate against Bucks County state representative Paul Clymer.

If we are to free ourselves from the quagmire of the partisan-political standoff we find ourselves in, we find the path to a non-partisan approach.

Democrat Don Cunningham, of whom I have been a severe critic, may be that path, along with this new group led by Allentown council member Roman and former Bethlehem aayoral candidate Bob Lovett, who seem to be groping their way toward more open government in Northampton and Lehigh counties, including elected, as opposed to appointed, court-services administrators in both counties.

Any Chance you could get those pols who want to wreck the baseball field to have themselves fired from the cannon?