I've been catching some flack over yesterday's post, in which I speculated that some Lehigh Valley pols might be vampires, particularly those in Nazareth. First, I started getting all kinds of hang up calls from people playing kazoos, Nazareth's official musical instrument. Then I got a strange call from some guy who wanted to know what I was wearing. Finally, when I left for work, all the tires on my jeep were punctured (I think they were fang marks). I tried reporting this vandalism, but the police just laughed. So I called the papers, but they've blocked calls from my phone again.

OK, I'll admit it. Maybe I was a bit rough. As I've said before, I'm sure that even those pols who support a new government center at Nazareth Hall Park are only interested in what's best for Nazareth. In that spirit, I decided to take a look at the plans for Nazareth Hall Park while my tires were getting fixed. But when the secretary left to use the ladies' room, I pulled open a file drawer and found the real plan, which you can see for yourself. Holy cannoli! They really are vampires! 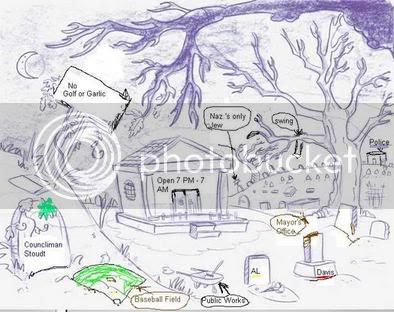 Bernie, you need to drink two bottles of Holy Water from the local Catholic Chirch, a bowl of split pea soup (A la the Excorcist), and call the Pope in the Morning.

OK. I just called the Pope and I think they got to him. He's speaking Latin backwards.

Is your head spining yet? LOL!
I think you need to start attending a political self help group I recently heard about.
It's called "Nazareth Borough Council" and while they all seem to suffer from some strange ailment or the other, there seems to be a common delusion that many of them share, an uncontrollable urge to spend tax dollars foolishly.
Another Common delusion is fear of sunlight, and if you truly have been infected, you will fit right in.
Do you remember a syndicated show about ten years ago called "Nick Knight"? It was about a "Good" Vampire who worked the night shift as a cop, and drank cows blood to stay alive.
Is it possible he was real, and is now a Nazareth cop?
Just wondering, your friend, Anon

I don't know, but I do know that all the cows that used to be in Nazareth's outskirts have now disappeared. I thought it was development, but now I wonder.

Hmm I love the idea behind this website, very unique.
»