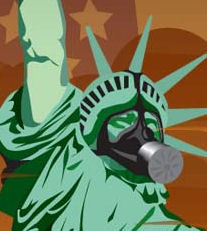 Not long ago, I rquested Charles Dertinger and Charlie Dent, the two major party candidates for the Lehigh Valley's Congressional seat, to declare our oil independence by pledging to refuse contributions from the oil industry. I asked them to take this pledge by Independece Day.

Dertinger immediately pledged he would not take a dime from the oil and gas industry. In fact, last week he joined a rally for oil independence outside of a south Bethlehem gas station.

I don't decide whether to support or oppose a candidate based on one issue. But I am extremely disheartened that Charlie Dent, a sitting Congressman who works for me, would not even have the courtesy to respond to an email. This is why special interest money is so malignant.
Posted by Bernie O'Hare at 7/04/2006 12:06:00 AM

"A Scandal Bigger Even Than the Walking Purchase of 1737," posted July 3, 2006, at 9:03 am, Filed under Casino Gambling, Property Tax, Revise PA Constitution of 1873, Environmental issues, and PA gubernatorial election, by blogger Billy Givens, http://www.billybytes.com/blog/, www.billybytes.com, and bgivens@billybytes.com.

I first met you, Bernie, in the summer of 2000 when I had come to Northampton County Courthouse's Courtroom One with residents of Williams Township concerned about the proposed Chrin Brothers Landfill expansion on Industrial Drive.

We never got the opportunity to address the issue, however; it was upstaged by the outrage of Northampton County taxpayers over the General Purpose Authority's determination to float a $113 million bond for courthouse and prison expansion and "economic development."

After the meeting, you and I sought each other out, and i told you that the proposed bond violated PA's Municipality Authorities Act of 1945, as amended, and also the county's Homerule Charter.

You and other plaintiffs filed a lawsuit against the proposed bond and prevailed: The bond was rejected by the PA courts and the PA Department of Community and Economic Development (PADCED).

As you know better than I, Northampton County and its GPA and own in-house DCED under the direction of Director Vincent Dominach and John Kingsley reworked the doomed 2000 $113 million bond, flew it up the flagpole again in 2001, as the revised $111 million version, that restored nearly $1 million in funds for the State Theatre and $1.8 million for a parking deck for the Theodore Kheel-owned former Hotel Easton - a Northampton County taxpayer-subsidized sum that quickly rose to $2.5 million.

These funds were restored at a Northampton County Council meeting at which Easton Mayor Thomas F. Goldsmith and former Mayor Salvadore Panto Jr., though not on the agenda, were allowed by council president Wayne Grube to lobby for restoration of the funds: Goldsmith on behalf of the former Hotel Easton parking deck in the Delaware River flood plain and Panto on behalf of the State Theatre, a project awarded non-competitively ("play for pay")to Alvin H. Butz Inc. and Bean Construction.

Councilman J. Michael Dowd, who represents District 2 on council, including the county's seat Easton, and who voted against the 2000 $113 bond, reversed himself and voted for the 2001 $111 million version after extorting promises from the county executive Glenn reibman administration that funing for the former Hotel Easton parking deck would be restored.

To meet your criteria for comments to your blog, keeping them relevant to your current posting, I am hanging my comment on the influence of big oil, partcularly its corrupting influence on 15th Congressional District representative Charlie Dent.

I urge readers to read The Morning Call editorial about PA's Superfund Sites, which include the former Bethlehem Steel "Love Canal" property, and to respond to this comment.

This comment is my offering to this year's July 4th celebration, given in the spirit of those patriots like Bob Lovett in Allentown, whose opinion piece on the editorial pages of today's edition of The Morning Call should be inspiration to us all for the re-birth of democracy in Allentown and sister third-class cities in the misnomered Lehigh Valley, Bethlehem and Easton.