A Moment of Mercy 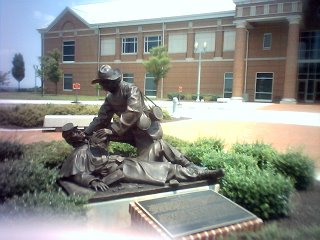 Although the Civil War is replete with tales of great commanders like Grant and Sherman, or Lee and Jackson, it's not the first thing you'll see if you ever visit the National Civil War Museum in nearby Harrisburg. If you make it atop that steep hill where the museum sits, the first thing you'll see is a sculpture, not of some fearless commander with drawn saber, but of two enlisted men. It tells an interesting story.

In a lull on a battlefield, where many wounded union soldiers moaned in agony after a failed assault, a 19 year old confederate soldier gathered all the canteens he could carry and dashed into the "no man's land" separating both armies, where he gave water to his wounded enemies.

The union commander, amazed by what he saw, shouted "Don't shoot that man! He's too brave to die."

Viewing that simple slab reminded me of our basic goodness. We, the simple enlisted men, might actually be able to teach a thing or two to our commanders. So far, our commanders have not taught us much of anything. And our Iraq war museum will not be a pretty sight.
Posted by Bernie O'Hare at 7/03/2006 08:41:00 AM

As a Korean veteran who has spent too many years in VA hospitals, your post today about the Civil War monument in Harrisburg touched me deeply.

As I read it, I was reminded of Stephen Crane, author of The Red Badge of Courage, who had never experience armed conflict directly, but wrote his classic novel based mostly on interviews with Civil War veterans in their beds and wards in military hospitals.

Your post also reminded me of the Civil War monumemt in downtown Easton's Center Square.

There's a memorial there to the Battle of Mobile Bay, the naval battle scene of my hometown, Mobile, Alabama.

As this Independence Day approaches, I am saddened that the U.S. Supreme Court in a 5-4 vote upheld the constitutionality of the doctrine of "knock and announce."

This decision further erodes our Fourth Amendment protections against "unreasonable searches and seizures," a cardinal reason for our declaring our independence from the tyrannical English government of King George III.

Alito, like Michael Chertoff, were appointed to their lofty postions on the High Court from their seats on the Philadelphia's Third Circuit Court of Appeals -

Chertoff as an assistant U.S. Attorney aided Kenneth Starr's prosecution - and persecution - of the Clintons in Whitewater.

Chertoff, Tom Ridge's successor as Secretary of the Department of Homeland Security, also presided ultimately over the Katrine-Rita disaster in New Orleans.

Chertoff also denied New York City the federal funds needed to protect its harbor and the citizens of the city.

Billy, It's an awesome sight. I'd recommend it to you and your wife. Incidentally, the confederate who gallantly supplied water to wounded union soldiers was eventually killed in battle.

Is it any wonder why we are hearing about so many atrocities in Iraq? After all isn't our mantra that there are no abslolutes-no right or wrong only what is convieneint for the moment.We've kicked God out of our homes and schools and then wonder why we see such a lack of moral values

What bothers me is the very people who want to involve God in everything are the people who made all these atrocities possible.

During the Civil War, as well as this war, a lot of generals claimed God was on "their side."

Lincoln, who never joined a church and never accepted Jesus as his personal savior, said "my concern is not whether God is on our side; my greatest concern is to be on God's side."

People who drape themselves in the flag and Ten Commandments while actually drafting memos that discuss things like waterboarding or the "quaint" nature of the Geneva Conventions, are not exhibiting moral values.

The Islamic militants who bombed the twin towers sure kept god in their lives, and look how well they turned out. Excellent point anonymous 12:22PM , you must have went to college...it shows. Believe in god, pray to god, love god... but don't invoke god into moral values. Instead think about using good judgement or common sense. I don't need a bible to realize that torture, murder, and unjust wars are immoral.

The same people who are espousing no mercy in this Iraq war will someday be standing before God asking for it. Lincoln did say he wanted to be on God's side, and it was his intent to be merciful to those who were vanquished. We have too many "chicken Hawks" like Rummy and Cheney overseeing this debacle.
They don't practice mercy, so they shouldn't expect it.

Hey #4 where do you think you got common sense and moral values? You still have #2 in your pants and your comment smells like #1. When you grow up into a big, big boy then maybe you'll realize that your really don't make sence at all.
Hey #3 I like your comments and I liked Dem fly on the wall, too

Dear Anonymous, Be nice or you won't go to heaven. You'll get stuck with me.

My morals and values come from #3, and unfortunately so does my common sense, thanks! :-)

I already know that I don't make any sense... I don't need to wait any longer for that revelation. I had an abusive uncle drill that into my head as a boy. To be honest the only reason I comment on things is so I can click on that publish comments button. I like to see what I type pop up on the website, it makes me feel happy.