Pa.'s Pols Are Still Finding Ways to Give Themselves More Money 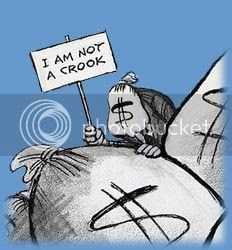 Morning Call columnist Bill White has warned us one of the main reasons second class townships like Lower and Upper Macungie are such messes is because supervisors can hire each other as township employees. That leads to trouble, especially when a township starts handing out credit cards. In Lower Macungie, a former supervisor is under investigation over a few township bucks ($1.45 million) she deposited in her personal account. And Upper Macungie supervisors are being investigated for misuse of township credit cards and the strange use of an inflatable doll.

One Upper Macungie Supervisor has flown the coop, and we bloggers have been having a good laugh. Lehigh County Redneck, Musings From Mudville, and I were still laughing when we saw Dave Ralis' post concerning a secret municipal pay raise that was slipped in right under our noses. This latest midnight payraise was maneuvered by House Democratic leader DeWeese to take care of his township supervisor pals. No hearings. The bill was camouflaged as an amendment to the state budget. It passed unanimously. We've stopped laughing.

It's amazing. When it is so glaringly apparent that the second class township code needs some serious reform, our state legislators decide to give supervisors even more money and kick things up a notch. (DeWeese watches Emeril). Maybe the boys in the land of midnight raises are hopeful we'll be so busy looking at financial messes in our own townships that we won't have time to pay attention to what is going on in Harrisburg. Sounds like a plan.

Meanwhile, back at the ranch, Northampton County's Finance Committee last Thursday decided to recommend payraises for the county exec ($85,000), the part-time controller ($50,000), and themselves ($9,500). Although this is long overdue, it is simply obscene for Council even to consider payraises for its bigshots when its rank and file employees have gone without raises for three years. That matter should be tabled until the employees get their raises, which they deserve. In the Army, officers eat after their soldiers. An enlisted man receives better treatment than a Northampton County employee. And soldiers don't get exposed to nearly as much asbestos and fiberglass fibers, either. But the judges' new palace sure looks good.
Posted by Bernie O'Hare at 7/31/2006 12:01:00 PM

The pay raise was a disaster for both parties sadly. I would have loved to hammer the liberals on this one but couldn't.

The only person who didn't turn into a pumpkin was a rare good Democrat John Yudichak who donated the raise.

Well, now it's a Dem House leader, and not Perzel, who's handing out the dough to his politician pals. It's nice to know greed draws pols of both parties, like moths to the flame. Thanks for your post, Doctor.

The root cause of the corruption in second-class townships of Lower and Upper Macungie is buried in Pennsylvania's Ripper Act of 1901.

This legislative act required Philadelphia taxpayers to pony up million of dollars for construction of the City Hall Building.

From atop this building's dome, William Penn can probably survey the 315 acres his rascally elder son Thomas stole through the fraud of trickery and forged deeds from the Delaware and Lenni Lenape Indians.

In Pittsburgh, the Ripper Act removed the city's elected mayor and replaced him with a "recorder," an underling of the poltical bosses who even back then controlled Pennsylvania's citizenry throgh the corrupt legislature and governor's office in Harrisburgh.

So outrageous was the Ripper Act, akin to Act 71 and Act 72 of Governor Ed Rendell and the legislators whose "butts," in his own words, he had to "kiss" in order to get the acts passed, in 1903 their predecessor Ripper Act was repealed (just as we're going to repeal Acts 71 and 72).

Unfortunately, however, the governor and legislature replaced the Ripper Act with the classification of municipalities as first, second, and third class, further muddled all kinds of esoteric "options."

It was in this manner that the Pennsylvania Republican Party Committee shoved the City of Scranton's favorite Republican son, William Scranton, as its nominee to challenge Rendell - the same maneer in which Pennsylvania's Republican Governor Tom Ridge forced Barbara Hafer out the Republican Party and into the hands of the Democrats by endorsing PAAG Mike Fisher as the party's nominee to challenge Ed Rendell - knowing full well that Fisher, with no statewide name recognition, would be sure lose to Rendell, Governor Ridge's partner in the giving away the Philadelphia Naval Yard to a shipbuilding company in Norway whose finances immediately after the port's transfer went belly-up.

I like John Yudichak, he's a decent, personable guy. But, it wasn't HIS money to give away. It belonged to the taxpayers.

There were plenty of other Democrats who REFUSED to take the unvouchered pay raise in the 1st place. THAT was the right thing to do!

And the political affiliation doesn't seem that important.

and what's this I hear that the Gracedale budget will be cut so that the court house overruns will be paid for.... all the while our "greatest generation" will be getting rained on because the windows leak, the judges' shiters will be marble lined. And we think Sadam deserved to be toppled....

Yep. Money set aside for Gracedale will be used to fund all the shortages in the judges' Taj Mahal. Stoffa will have to take from Gracedale's budget, although he claims he will find the money to fix Gracedale, too.

The county bond money used for Commerce Road was $2 million less than expected. So Bethlehem wants that $2 million for another road. Now the county could divert that money to complete the courthouse, but it will instead be given to Bethlehem.

Stoffa told Council that's their business. That's his business, too. He is the county exec. He has a veto power.

The best solution is to take that money as well as the money for the road to Walmart, and use that money to make up the courthouse shortages. This is not rocket science.

Butr Council won't do that bc they know that handing out public money makes them look good in the short term.

Stoffa is so out of touch he doesn't know what day of the week it is! County employees wonder if he'll even finish out his term. This guy makes Reibman look like County Executive of the Century! The people I talk to at the County all say the same things about Stoffa: feeble, fragile, and clueless.

I've been a Stoffa cheerleader from the onset. Employees have not given Stoffa a chance to set the ship right. That's understandable since they're the ones who have had no payriases for three years.

But I'll tell you something. I was disturbed by Stoffa's reluctance to interfere with county grants when the courthouse budget is short. I was bothered by Stoffa's quickness to take the money from Gracedale, although he claims there still is plenty of money to fix everything. But what bothers me most of all is that employees seem no better off now than they were when Stoffa was inaugurated. That has to change.

The employees supply th county services, not that Taj Mahal. The county needs to take care of them, but it really doesn't seemn that the county has even tried. The administration won't even bother to pick up the Declaration of Independence, which is lying on its side in a hallway. If it won't do that, and still won't do it after the problem ghas been noted, how likely is it that it will take care of its own employees?

The problem of hiring their own at the township level is a huge problem that should be looked into further. Personally, I question the ethics of those who do it. While we have seen the obvious abuse of theft of funds, what would be interesting would be a look at how many of these township managers go their jobs and how they are getting compensated.

In Hanover Township (Northampton County), a change in manager officialy occurred Jan 1. Jay Finnigian was hired in April 2005 to fill the position. On the surface this looks legit. But ... how did he get there and what was the cost?

How did he get there?

After placing no ads for the open position, the Township Supervisors unanamously voted for Finnigian as the new manager upon the old manager's retirement. Did I mention that Finnigian was the president of the Board of Supervisors? Did I mention that he held onto that position after he started working for Hanover Township in April 2005 (more on that later)?

What was the cost?

Because of Mr. Finnigian's vast experience AND being the right guy for the job, the Supervisors (Finnigian's frineds) gave him a "training period" of 8 months and 3 weeks ... at full salary. Besides the ethical questions that arise from the situation, why would he need all of that training if he was properly qualified? And, in the real world (read: non-government jobs) you will likely have a reduced salary as a trainee.

Then there is the $81,000+ starting salary, the new SUV the Township purchased for his use - which he takes home with him every evening - and the other benefits (pension, health care, etc), this patronage deal has cost the taxpayers a small fortune. Now I know the 3 miles round trip he makes to and from work adds up to a small amount of gas/costs, it really bothers me that he is allowed to do this.

This has all been done at a time that Township taxes have been increased and will likely continue to do so into the future.

While the big headline issues like the one's in Macungie are horrible to see, the more widespread abuses on the local level are like the one described above. I am sure that Hanover is not the only place this has happened, and will not be the last stop for poor ethical decisions that favor the few and cost the taxpayer.

To Anon 1:26 PM, Thanks for your comments. They drive home the potential for abuse presented by the second class township code, and are worthy of a separate post.

The Macungies, Hanover, and Lower Saucon Tp have all been mentioned by me or someone making comments, and that is just today! These are all second class townships. Throwing more money at the supervisors is the last thing we should be doing.