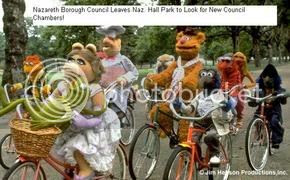 "Everyone else has one. Why can't we?"

No, this is not the argument of some little kid asking his mom and dad for another Rottweiler. They are instead the very words I actually heard a Nazareth Borough official use to justify a new government center inside a residential park. In previous posts here and in News Over Coffee, you've heard this proposed expansion will (1) destroy more of Nazareth's shrinking parkland; (2) make the park useless as a park for neighborhood kids and their Rotweilers; (3) simply cost too much; and (4) remove borough offices and police station from the business district, where they are most needed. I've also told you the proposed expansion was planned behind closed doors in violation of the Sunshine Act by a borough council that operates best in shadows and darkness. Well, I can keep secrets, too!
No, I can't. I've got to tell you what I found out. The proposed expansion at Nazareth Hall Park can't be done legally. That's right, bippy. You see, the Deed for the Nazareth Hall Park tract contains something called a "restrictive covenant." That's a fancy way of saying that an owner's use of the land is restricted in some way. This kind of covenant runs with the land forever and is independent of zoning laws.

In the Deed for Nazareth Hall Park, Nazareth is restricted from building anything within seventy-five feet from the south curb of Center Street. Uh oh. Guess what? The Council chambers that already sit at Nazareth Hall Park violate that Building Restriction Line. Uh oh. Can you say wrecking ball? Now I don't think anyone wants to make an issue out of that little illegality, but we've got a whole new ballgame if borough officials seriously intend to attach a police station and borough offices to a building that already violates a restrictive covenant.

If you decide you want to buy property or borrow money secured by a home you already own, the very first thing a bank will do is have the property searched. They look for other liens, but also like to know whether the property is itself encumbered by a restriction that might make it difficult to build or make other improvements. Apparently, Nazareth officials have not done their homework. They didn't do it six years ago when they first proposed this ridiculous expansion, and they haven't done it now. Why am I not surprised?

History of Nazareth Hall Park: For those of you who may be interested, I thought I'd include a brief history Of Nazareth Hall Park. The tract is part of a larger tract sold by the Moravians to Nazareth Hall Boarding School in 1898. In 1929, when the Boarding School conveyed the tract to the Children's Home, the park tract was referred to as an "athletic field." In 1946, the property was conveyed to its present owner, the Borough of Nazareth. Since 1898, this property has been devoted to children.
Posted by Bernie O'Hare at 7/26/2006 12:01:00 PM

It will be interesting to see how Al Pierce twists the law on this one!!!

Al could argue that the 75' BRL has been waived. While that argument would apply to the current Council chambers, I don't see how people can waive a restricitve covenant violation for a government expansion that has not occurred.

This just gets more interesting. Why doesn't it occur to anyone that Nazareth has some wonderful old buildings, with a charm and class that you can't find in the townships, that would make a terrific Borough office building? Leave the Police Dept. where it is, fix up the building for them, and get the offices a "new" old building. They do need more space, but not next to Boro Hall.

I've heard reports of all kinds of problkems at the Belividere location. I'm sure they're all true - but that's what happens when you do NOTHING to maintain a place. And that's what happened at the historic structure on Belvidere. I think the problems can be fixed but I'm no engineer.

I think you have the right idea. If they need to move, refurbish a vacant older building in the business district and let that park alone.

Thanks for your insight.

Bernie, I think I could successfully argue, base on their behaviour, that some politicians in Nazareth ARE children. Thus satisfying the need to use it for children, in other news, I finally figured out this blog thing, and I would like you to click on my name and read the Op-ed I am considering submitting to the Morning Call to counter the garbage they published by Reichley this morning. Mad Batter says you are the man, and I lent him money to get his wife out of jail in Rehoboth Beach. Something about an incident at some resort?

Chris, Regarding Nazareth's pols, I know they're trying to do the right thing - but once they exclude the people, everything goes wrong. I hope they will reconsider their options instead of digging in their heels.

As far as that other matter in Upper Macungie is concerned, I'm going to have some fun writing about that tonight, and will check out your proposed op-ed.

"Everyone else has one, why can't we?" says it all. The problem can be summed up very simply: this is a big dick contest!!!

The problem all started in the Lehigh Valley with the Parkland SD and the $75MM High School. Ever since, the local politicians have had big dick envy. It would be a sin to have some other school district or township to have better facilities, no matter what it may cost the taxpayers.

Don't believe it? Look at the plans in the Bethlehem Area SD for the $43MM Broughal Middle School. Go to downtown Easton and check out the new Government Center. Have you seen what they want to do in Lehigh County?

What you are seeing in Nazareth is just the latest installment of this expensive phenomena.

I can't wait to see what nuggets you have dug up on this Twilight Zone/Peyton Place that I call home. What a long strange trip it has been.

To Anon, Unfortunately for us, your metaphor is very apt.

Hmm I love the idea behind this website, very unique.
»